IATA again upwardly revised its 2010 outlook following a strong first half to the year, with the organisation now projecting a profit of USD8.9 billion – up from the USD2.5 billion profit forecast in Jun-2010 and a USD2.8 billion loss forecast as of Mar-2010 – on revenues of USD560 billion, commenting that the “industry recovery has been stronger and faster than anyone predicted”. However, IATA warned that profitability for 2011 will drop to USD5.3 billion (with a 0.9% margin), stating 2010 is “as good as it gets for this cycle”.

Commenting on the upgrade, IATA Director General Giovanni Bisignani stated: “The USD8.9 billion profit that we are projecting will start to recoup the nearly USD50 billion lost over the previous decade. But a reality check is in order. There are lingering doubts about how long this cyclical upturn will last. Even if it is sustainable, the profit margins that we operate on are so razor thin that even increasing profits 3.5 times only generates a 1.6% margin. This is below the 2.5% margin of the previous cycle peak in 2007 and far below what it would take just to cover our cost of capital." 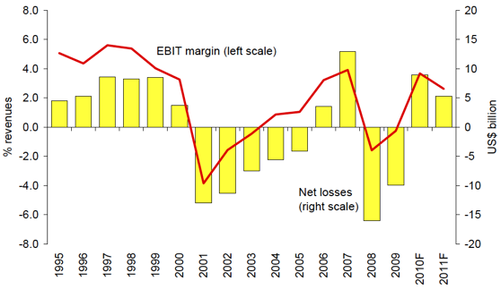 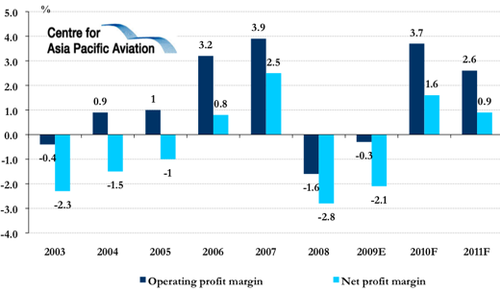 The improved outlook for 2010 is being driven by a combination of factors: On the revenue side increasing demand and disciplined capacity management are leading to sharply stronger yields pushing revenues higher. At the same time, costs remain relatively stable.

Demand back above pre-crisis levels

Rapidly improving demand has pushed traffic 3-4% above the pre-crisis levels of early 2008, although it is still “far from regaining the previous trend with over a year’s growth lost”. The explanation for this lies with a “rapid recovery in business confidence but a continued lack of consumer confidence”. Passenger numbers are also growing. 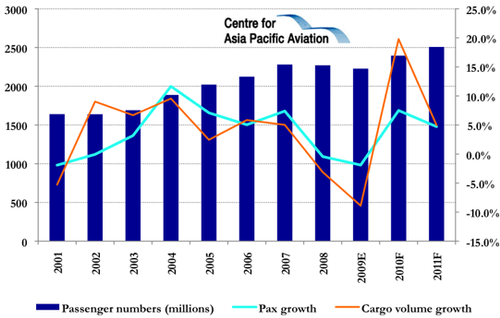 IATA commented that the recovery in freight demand after the late-2008 collapse has been “remarkable”, adding: “Not long ago we were expecting to have lost two to three years growth in this market.” By the middle of this year, air freight was back above pre-recession levels and almost back to the pre-recession trend. 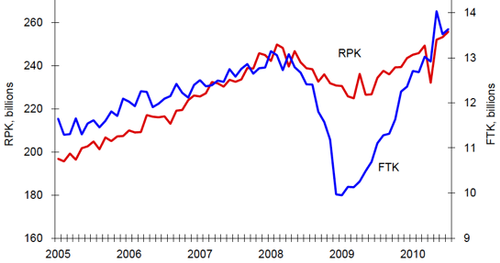 Yield improvements are the most important factor driving the improved outlook. On top of capacity cuts in 2008, capacity expansion is lagging behind demand improvements with the result being higher load factors and some pricing power for airlines. However, passenger aircraft utilisation has been weaker, as capacity was reduced by flying the in-service fleet less intensively, with this having a negative impact on profitability. Cargo utilisation has, however, been recovering in line with load factor improvements. 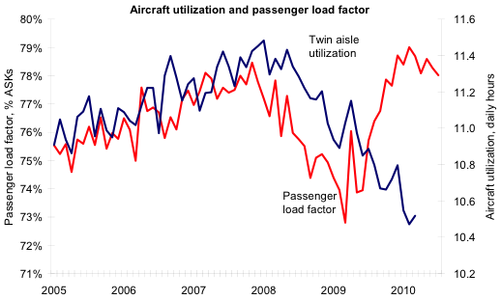 More business travellers on premium seats are also boosting average yields, which are now expected to grow by 7.3% for passenger and 7.9% for cargo in 2010. This is sharply higher than the 4.5% previously projected for both. However, even with this improvement, yields remain 8% below the pre-crisis levels of 2008. 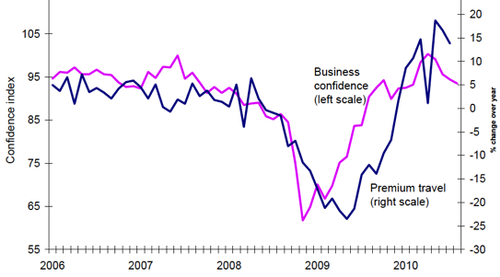 Revenues almost back to pre-crisis levels at USD560bn

Revenues are expected to grow to USD560 billion in 2010, which is USD15 billion more than previously forecast. This is only slightly below the USD564 billion in revenues achieved in 2008 when the previous economic cycle peaked and prior to the start of the financial crisis.

The revised outlook maintains an average full-year crude oil price of USD79/barrel. IATA added that excess refinery capacity is pushing the “crack spread” slightly lower than previously anticipated resulting in lower prices for jet fuel. Even with stronger traffic the total fuel bill is now forecast to be USD137 billion, USD3 billion lower than forecast in June. Fuel continues to account for about 25% of industry costs.

IATA added that while labor tensions are rising in some regions, with aircraft utilisation starting to rise, productivity is improving and so unit costs are little changed so far.

Sharp regional differences remain in the 2010 forecast, with Europe to remain the only region to report a loss in 2010, although this has been downwardly revised from a loss of USD2.8 billion to a loss of USD1.3 billion. IATA added that cash flows are rebounding across the board, except in Europe, with the rebound occurring much faster than expected, largely reflecting a sharp cyclical upturn in traffic volumes and/or yields.

IATA also warned that the durability of the upturn is in “increasing doubt in North America and Europe”, although the forecast for North American airlines was upwardly revised for 2010, as carriers benefit from careful capacity management which has generated a “significant rebound in yields”.

Asia Pacific carriers are expected to report the highest profit, of USD5.2 billion, better than the USD3 billion recorded during the previous peak in 2007 and double the previously forecasted USD2.2 billion, as the region continues to be the major beneficiary of a very sharp rebound in cargo markets and revenues. All regions except Africa showed improved prospects compared with the previous forecast.

IATA warned that a key challenge for 2011 will be to boost and sustain asset utilisation in the face of slowing market demand and a surge of new aircraft deliveries. IATA expects capacity to rise marginally faster than demand in 2011, causing the yield improvement to stall and profitability to be reduced.

During 2011, profits in North America, Asia Pacific, Latin America, Middle East and Africa are all expected to weaken, with improved results only anticipated for Europe (with a breakeven result), for an overall tougher year in 2011.  Asia Pacific is expected to drive the profit, with profits of USD3 billion in 2011.

Describing the weaker outlook, IATA said “the initial impetus from business inventory building and fiscal stimulus has ended, if not gone into reverse”, raising doubts of the durability of this upturn, with this weakness likely to “coincide with increasing capacity, as new aircraft deliveries rise and fleet utilisation recovers” with load factors and yields to also come under “downward pressure”.

IATA continued: “The impact of the post-recession bounce from re-stocked inventories will dissipate. Consumer spending is not expected to pick-up the slack as joblessness remains high and consumer confidence falls in Europe and North America. Travel and freight markets will remain stronger in regions such as Asia, the Middle East and South America but we do not expect these hot spots to be able to sustain global growth in 2011. Slower growth is expected to keep costs in check and oil prices are expected to remain constant at USD79/barrel. Industry growth is expected to fall back to 5%, in line with the historical trend. But a surge of aircraft deliveries (1400) will fuel capacity expansion of 6%, in excess of expected demand improvements. Falling load factors will remove the possibility for further yield improvement leading to a more challenging revenue environment."

Outlook: Improvement but 'not enough for a big celebration'

The improved outlook for 2010 is a major boost for the aviation industry, which has had a horrible past two years throughout the global financial crisis. With improved profitability and revenue forecasts, net margins are also expected to improve from 0.5% and 1.6%, although even this is “well below the 7-8% we would need to cover the industry’s cost of capital”. For this reason, IATA stated the revised forecast 2010, while a significant improvement, is “not enough for a big celebration”, with margins forecast to stand at a weaker 0.9% in 2011.