IATA raises its airline profit outlook, but the cracks are still clearly visible under the surface

IATA’s Dec-2013 forecasts of airline industry profits make positive reading at first glance. IATA has increased its profit forecasts for both 2013 and 2014 and its 2014 margin forecast is close to 2010’s cyclical peak. However, beneath the surface the cracks are still clearly visible.

Higher profit forecasts are entirely due to lower fuel prices and the drive to reduce non-fuel costs has lost some momentum. Cargo is a drag on industry profits (particularly in Asia) and regional divergence is increasing. Top-performer North America is benefiting from consolidation, but this is impeded at the global level by restrictions on ownership and control. Under-achiever Europe is held back by legacy cost issues, a still weak economy and government-imposed taxes and regulation.

Our previous observation that we may be witnessing a structural improvement in world airline profitability remains valid, but beating the cost of capital remains distant. This will require not only an even sharper focus on cost and capacity discipline from airlines, but also concerted moves by governments to lower taxes and charges and to remove the restrictions on ownership and market access.

In its latest quarterly update of its world airline industry financial forecast, published in Dec-2013, IATA has raised its 2013 net profit forecast by almost 11% from USD11.7 billion to USD12.9 billion. This represents a net margin of 1.8%, an increase of just 0.2 ppts from its last forecast, published in Sep-2013, and is 74% higher than the result recorded in 2012.

In spite of keeping its 2013 world GDP growth forecast unchanged at 2.0%, IATA has increased its forecast of 2013 passenger traffic growth from 5.0% to 5.3%, noting that “The robustness of air travel, despite high oil prices and relatively weak economic growth, is one of the positive developments in recent years.” However, IATA has very slightly lowered its forecast of passenger yield growth in 2013 from flat to a fall of 0.2% due to competitive pressures.

It has made a very small upward revision to outlook for cargo traffic, which it sees growing at 1.0% in 2013, and it continues to expect a 4.9% drop in cargo yield.

The net impact of IATA’s forecasts for these various elements of revenue drivers is to leave its 2013 and 2014 total industry revenue forecasts unchanged.

The increased profit forecasts for 2013 and 2014 are due to lower jet fuel price forecasts. For both years, IATA now expects jet kerosene to be almost 2% lower than it did in Sep-2013, following the easing of geopolitical tensions over Iran. This is more than the reduction in the crude oil price forecast, reflecting a reduction in the crack spread.

IATA’s forecasts do not see much change in non-fuel costs per ATK relative to its previous outlook.

By region, North America is still forecast to have the highest operating margins in the world, increasing from 3.4% in 2012 to 4.8% in 2013 and 6.4% in 2014, significantly higher than the 4.7% global operating margin forecast. A stronger US economy and the benefits of industry consolidation are the two key factors in driving this upward trend.

Latin America is now forecast to rise from being the third least profitable region in 2012 to being the second most profitable in 2014, when IATA forecasts its margin at 5.1%. Expansion of hub carriers in the Persian Gulf is set to push the Middle East’s margin to overtake that of Asia Pacific, whose profitability is weighed down by the weakness of cargo operations and poor profitability in markets such as India.

Asia Pacific profitability is also likely to be subdued in the impact of an expected delivery of 710 new aircraft in 2014, according to IATA. The region is the only one among the big three global air traffic regions to see its EBIT margin forecast for 2014 reduced by IATA.

Europe’s margins are forecast to follow an upward trend as the Eurozone economy returns to growth and long haul markets perform reasonably well, particularly for those carriers involved in North Atlantic joint ventures. Nevertheless, the gap between the region’s profitability and that of the world airline industry globally is set to widen as the economic backdrop remains slow and as Europe’s larger legacy carriers continue to grapple with restructuring programmes.

IATA expects Africa to remain the least profitable region, with EBIT losses in 2013 and reduced margin forecasts in both 2013 and 2014.

2014 passenger traffic growth is in line with long term average, although GDP growth is below average

IATA’s Dec-2013 forecasts continue to see world GDP growth of 2.7% in 2014. This is below the long term average GDP growth rate of 3.1%, but IATA forecasts passenger traffic growth of 6.0%, in line with its long term average. It seems that the airline industry is generating higher traffic growth from a given level of world GDP growth than in the past, possibly reflecting the growing weight of emerging markets in global air traffic. Modestly lower forecast yields may also be stimulating traffic growth, but are also counteracting it to result in broadly unchanged revenue forecasts.

IATA sees cargo traffic growth picking up from 1.0% in 2013 to 2.1%, in 2014, but this is lower than its previous 2014 forecast and well below long term average rates of growth in cargo traffic. On the cost side, a modest fall in oil prices is forecast, with little change expected in non-fuel cost per ATK.

Previous cycles had seen operating margins peak at around 6%. Whether the industry can go on to achieve, or exceed, this level in the next few years will depend on economic growth, capacity discipline and the absence of shocks to demand or oil prices.

Total airline industry revenues more than doubled from 2003 to 2012, with passenger revenues outpacing the total and cargo revenues lagging behind. As dedicated freighters continue to fall out of favour, passenger belly space is taking a growing proportion of air cargo. However, air cargo is suffering a structural loss of share to sea transport and world trade remains relatively weak overall as a result of the ‘on-shoring’ of production.

This means that total cargo capacity is still growing faster than demand for air cargo. IATA’s forecasts see cargo revenues stagnating at USD60 million, around the same level as in 2007, while 2014 passenger revenues are forecast to be 50% higher than in 2007. 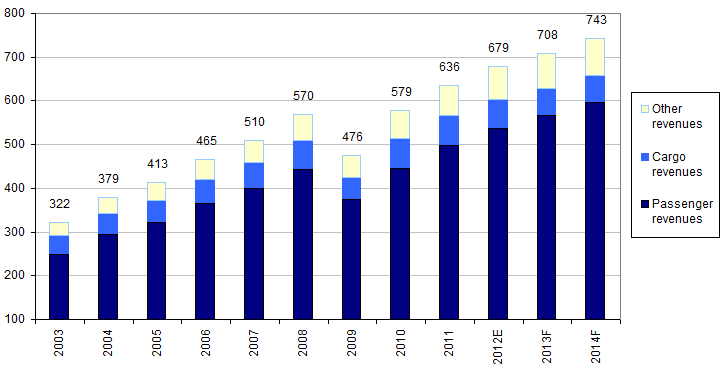 Revenues other than passenger and cargo revenues have seen the fastest growth since 2003. This revenue stream is ill defined, but includes ancillary revenues in addition to non-flight activities of airlines, such as MRO, handling and third party catering. These other revenues grew by almost 140% from 2003 to 2012 to become more important than cargo revenues. IATA forecasts further growth, broadly in line with passenger revenues, to 2014. 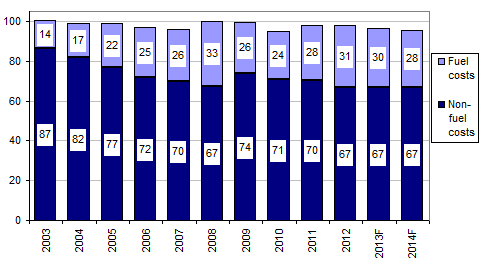 Margins remain thin, but are in a multi-year phase of being positive

This trade-off between fuel costs and non-fuel costs has meant that, in spite of revenue growth over the past decade, operating margins have remained thin and volatile. If the two forecast years 2013 and 2014 are brought into the picture, the chart below suggests a broadly upward trend in margins over the past decade or so, perhaps reflecting the industry’s efforts to reduce non-fuel costs and the more stable fuel price environment in the latter years.

If IATA’s forecasts for 2013 and 2014 are borne out, the six years of positive operating margins from 2009 to 2014 will have been the longest period of uninterrupted positive margins since the 1990s. 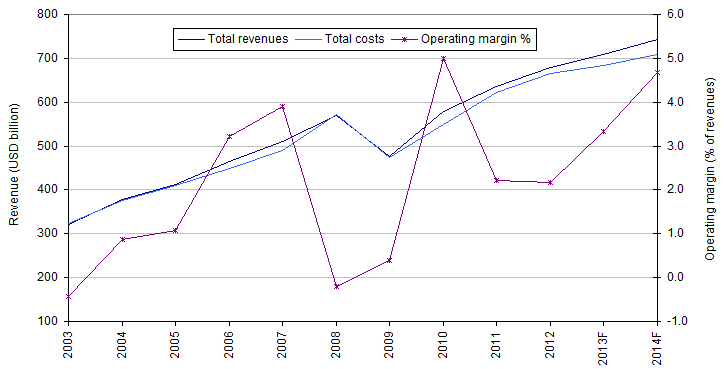 The long term margin trend is sideways, but recent years hint at a structural improvement

However, a chart with a longer time horizon, including previous decades, is less clear on any upward trend in profitability, although we have previously suggested that there is some evidence of a structural improvement in world airline profitability. If IATA’s forecasts for 2013 and 2014 prove to be correct, it seems that the current decade is managing to achieve traffic growth and operating margins at a higher rate from a given rate of world GDP growth than in the past.

The Capacity Index is turning up

This looks set to happen in 2013 and 2014, although the Capacity Index is set to remain well short of historic peak levels in the next two years, whereas IATA expects operating margins to approach their peaks more closely. As we have suggested previously, it seems that the airline industry is now achieving better margins from a given level of capacity utilisation than in the past. 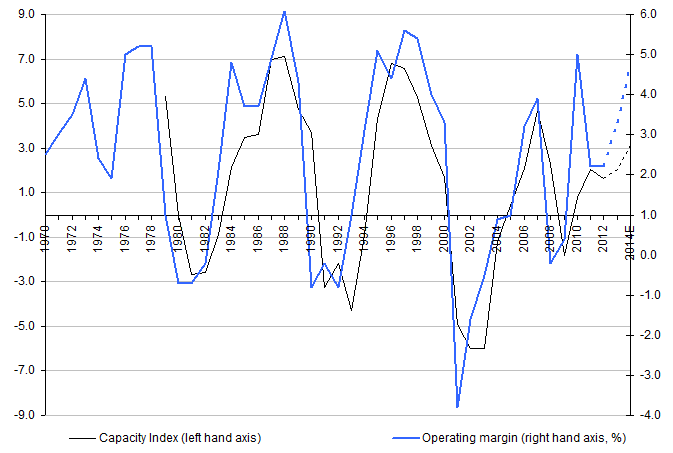 A cheese sandwich is more valuable than an espresso

Of course, it will take a few more years before this apparent structural improvement in profitability can become clearly established. The airline industry is notoriously susceptible to one-off events that hit demand and/or costs. It is also highly cyclical, with a pattern of profitability that is closely related to economic growth. Moreover, it has historically failed to cover the cost of capital as determined by investment market benchmarks.

To put rising industry profits into context, IATA forecasts that the world’s airlines will generate USD224 billion of revenues per passenger in 2014. After paying all costs, including finance and taxation, they will be left with a forecast net profit per passenger of only USD5.94, enough to buy a cheese sandwich for each passenger. This is better than the cup of espresso represented by 2012’s USD2.56 per passenger, but highlights what is still a very low margin, especially given the industry’s capital investment needs.

Liberalisation of restrictions on ownership and market access is needed

These inadequate levels of profitability will have to increase if the industry is to continue to attract investment and to play its part in economic growth. This will require even greater efforts to control costs and capacity, but it will also require a more complete process of cross-regional consolidation than has been allowed to date.

Only full liberalisation of restrictions on ownership and market access can lead to a truly global market in which the more efficient operators can enter new markets, engage in genuine mergers and drive up returns.

In spite of reduced levels of state ownership of airlines compared with the past, governments still have a major role to play in allowing the industry the freedom to achieve financial sustainability.

On the positive side, at least some governments are awake to this need; but often they receive mixed signals from short term protectionist noises like those emitted by Airlines4America. More often however, governments are simply unaware of the negative impact of their inertia. Here there is still a job to be done by the world's airlines.

Return on capital invested in airlines and their cost of capital 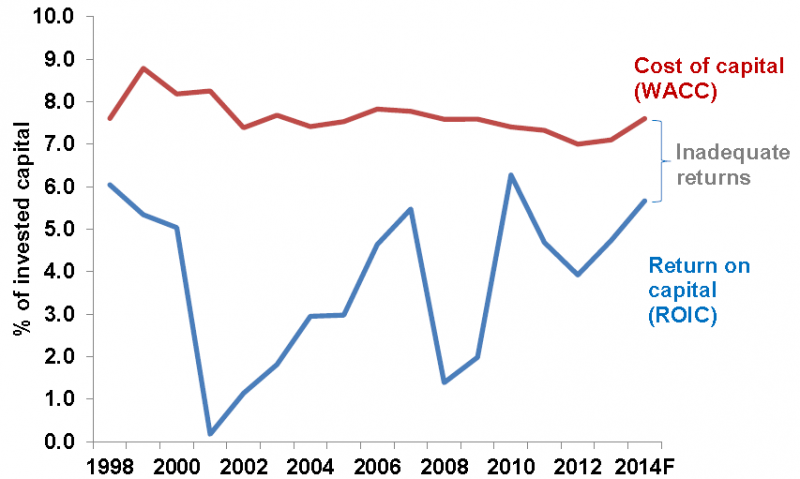