IATA predicting wider industry loss of USD5.6 billion for 2010, due to yield weakness

The revised forecast was due to “renewed downward pressure on yields, together with an upward revision to oil and jet fuel prices”, which are expected to more than negative the improved economic growth and passenger growth forecasts.

IATA Director General and CEO, Giovanni Bisignani, commented, “we are ending an Annus Horribilis that brings to a close the 10 challenging years of an aviation Decennis Horribilis. Between 2000 and 2009, airlines lost USD49.1 billion, which is an average of USD5.0 billion per year”.

For 2009, IATA maintained its forecast of an USD11 billion net loss, following signs of improvement during 3Q2009 (operating profit for sample airlines was USD2.9 billion, with a net post-tax profit of USD351 million), as a move out of recession and to strong economic growth (particularly in emerging markets) boosted airfreight, then passenger demand. The Association expects a global operating loss of USD3.7 billion in 2009. 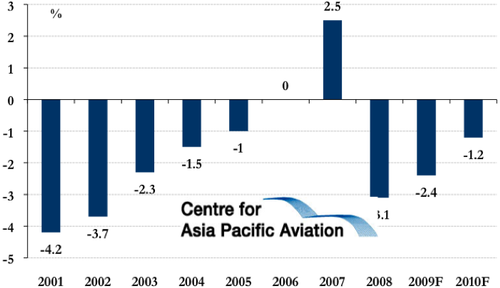 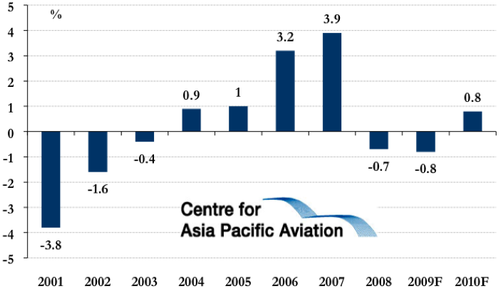 Mr Bisignani added that some key statistics are "moving in the right direction" for 2010. Demand will likely continue to improve and airlines are expected to drive down non-fuel unit costs by 1.3%”. However, despite these improvements, airlines will “remain firmly in the red in 2010”.

IATA also believes that the changes arising as a result of the global economic crisis will have a long-term impact, with Mr Bisignani commenting that the industry is “structurally out of balance”.

Bisignani stated the “precipitous" fall in yields will "likely never be fully recovered". He added, "it is difficult to see how this can be balanced on the cost-side of the equation. After almost a decade of cost cutting, non-fuel unit cost reductions will be incremental at best. And the risk of rising fuel costs will be constant. There will be some individual airline success stories. But without relaying the foundations of the industry to facilitate structural change, covering the cost of capital for this hyper-fragmented industry will remain a dream at best”.

According to IATA, “poor yields are driving industry losses”, with yields a “continuing disaster” for airlines worldwide.

Economy and Premium fares on international markets: 2007 to 2009 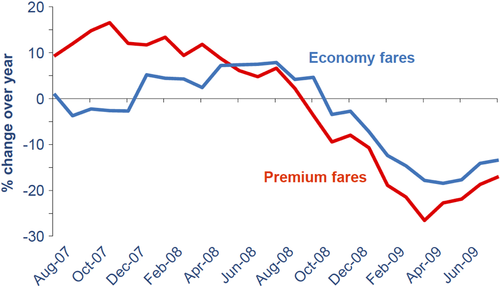 IATA added that the continued yield weakness is being driven by two factors: excess capacity in the market (which is driving lower aircraft utilisation, which is down 6% in 2009) and reduced corporate travel budgets. 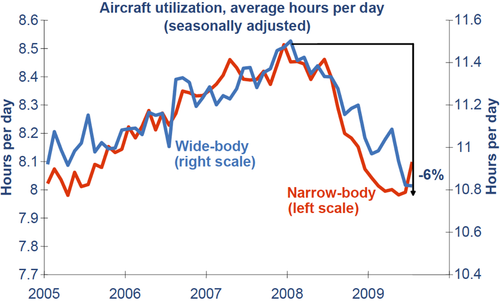 An additional 1,300 aircraft due for delivery in 2010 (representing 5.5% of the fleet) will contribute to 2.8% global capacity growth in 2010, putting continued pressure on yields. 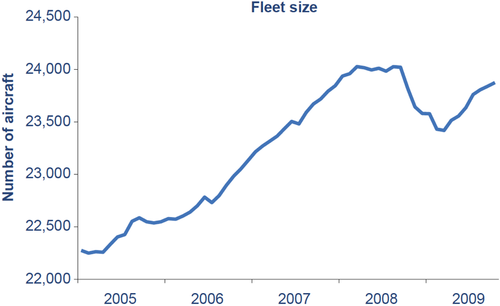 IATA stated that industry revenues are expected to increase 4.9% to USD478 billion in 2010. However, revenues would remain 11% below the peak of USD535 billion in 2008 and USD30 billion below 2007 levels, when passenger traffic was at similar levels to what is expected in 2010.

The cargo demand forecast has also been upgraded, with IATA expecting cargo to grow by 7% to 37.7 million tonnes in 2010 (stronger than the previously forecast 5%), following a 13% decline in 2009. However, freight volumes will remain 10% below the 41.8 million tonne peak recorded in 2007. 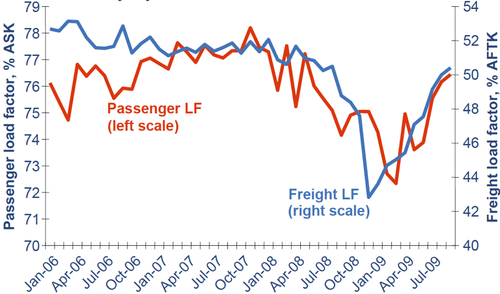 The aviation industry has raised at least USD38 billion in cash in 2009, of which USD25 billion has come from capital markets and USD13 billion from aircraft sale and leasebacks. This ratio of cash to revenues has improved particularly for European and North American airlines, providing a “cash cushion” ahead of the seasonally weak 1Q2010 period, but was flat for Asia Pacific carriers. 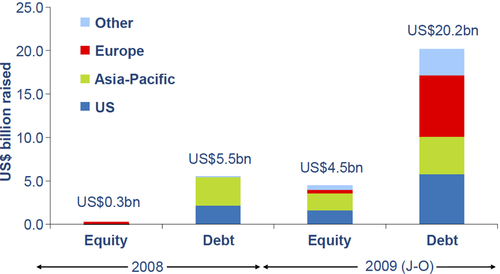 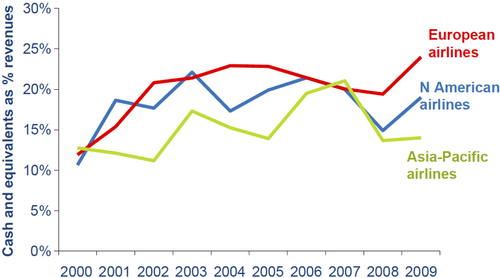 According to IATA, all regions, with the exception of Africa, will see an improvement in 2010 compared to 2009, with European carriers expected to generate the largest losses of any region at USD2.5 billion in 2010. Latin American carriers are expected to be the only profitable regional grouping in both 2009 and 2010.

Mr Bisignani stated he does not see the threat of major bankruptcies, but added that smaller airlines are having continued difficulty accessing credit and, as a result, they remain “fragile”.  So far in 2009, IATA has terminated 30 airlines because they could not pay their bills. Of these, 14 have disappeared.

Priorities for 2010: Safety, Environment, ‘Simplifying the Business’ and ‘Financials’

Outlook: “Worst is likely behind us” but challenges to continue

The good news is that IATA believes that the “worst is likely behind us”. However, the industry has taken a couple of steps backwards as a result of the global economic crisis, with 2010 expected to “look much like 2007”, with passenger levels and oil to return to level similar to those in 2007.

However, a key difference is that revenues are expected to be USD30 billion less than 2007 levels and further major cost reductions will be “difficult”, albeit not impossible.