Some of the largest industry suppliers, including Airbus parent, EADS, as well as Boeing and Rolls Royce, reported positive movements yesterday, despite IATA's revisions to its 2009 industry loss forecast. Airbus CEO, Tom Enders, suggested that the market for aircraft orders is finally beginning to pick up and is maintaining its target of 300 orders for the year, although 2009 conditions are expected to remain tough. The manufacturer confirmed it is in negotiations with “various” carriers for new orders, and expects to announce some new contracts at next week’s Paris Air Show.

IATA’s revised outlook for the airline industry nearly doubles the forecast losses for airlines in 2009 to USD9 billion.

Airbus and Boeing have both had major order cancellations and delivery deferrals this year, particularly affecting Boeing’s B787 programme. Another ten could be added to that list, with Jet Airways announcing it is considering deferring deliveries of its B787 orders. Airbus’ primary concern is also deferrals, and it expects cancellations to slow, although ILFC, the world’s largest aircraft lessor, is assessing its options for its order for ten A380s, noting that there has been a "general structural change in the industry and in the way that airlines think about the A380". Thai Airways is also hinting at dropping its order for six A380s.

ILFC has softened the blow somewhat with an announcement that it sees significant replacement demand and fleet modernisation demand in the next five years and is in negotiations with Airbus and Boeing for more aircraft, although it will be pressuring on price.

The outlook for both orders and deliveries remains difficult to assess beyond 2009. EADS CEO, Louis Gallios, confirmed that aircraft deliveries the year would be much in line with last year’s deliveries of approximately 480 aircraft.

Part of comparative strength of shares in large suppliers yesterday also reflects a Goldman Sachs analysis that suggests that the civil aerospace represents is a “significantly more attractive” market than defence over the next three years. US and UK defence budgets are expected to decline from 2010 onwards.

Boeing was up 0.3% in trading yesterday, while EADS climbed 1.8% and Rolls-Royce rose 1.9% - the latter two receiving upgrades from ‘sell’ to ‘neutral’ by Goldman Sachs.

Meanwhile, MTU Aero Engines CEO, Egon Behle, announced that the engine manufacturer expects “high profitability” in 2010 and has secured new contracts in 1Q2009, mostly for spares and maintenance rather than engine, bulking out its order backlog to EUR4.2 billion. The stock traded up 4.7% yesterday. 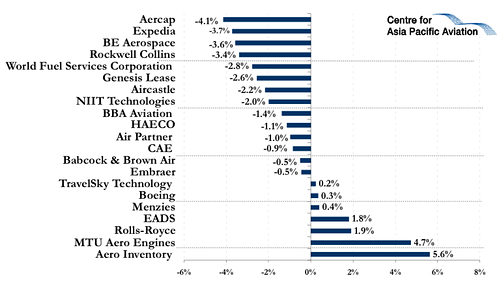