The 1Q2015 financial results of Europe's Big Three legacy airline groups again highlight their diverging pathways. Although all three recorded improved results versus last year, IAG underlined its superiority by posting a positive operating profit in what is seasonally the weakest quarter.

CAPA analysis often highlights the importance of cost discipline and much of IAG's success relative to Air France-KLM and Lufthansa is due to the head start it gave itself in pushing restructuring, particularly of labour costs. This remains crucial.

However, the focus of this report is to analyse the 1Q2015 unit revenue (RASK) performance of the Big Three and the relationship between RASK growth and ASK growth. Our analysis confirms that RASK performs better under conditions of tight capacity discipline, but also highlights some crucial differences between the Big Three and between their major route regions.

As shown in the table below, IAG was the only one of the Big Three to achieve a positive operating result in 1Q2015.

All three improved their operating result year on year, but IAG's improvement was the strongest, both in terms of the absolute EUR million increase and also the margin improvement.

IAG increased capacity at the highest rate in 1Q2015

The highest ASK growth of the three was implemented by IAG, with an increase of 5.0% in 1Q2015. This compares with 1.0% for Lufthansa and 0.3% for Air France-KLM (Air France-KLM's ASKs were up just 0.1% if we exclude its LCC subsidiary Transavia, which grew by 5.1%).

IAG was boosted by strong growth at Vueling, whose ASKs increased by 18.3%. Nevertheless, both British Airways (+2.6%) and Iberia (+8.2%) increased capacity faster than the other two. IAG's two legacy airlines combined saw ASK growth of 3.9%.

The Lufthansa group's 1.0% increase consisted of 1.5% growth for Lufthansa Passenger Airlines/Germanwings, 2.3% growth for SWISS and a cut of 6.9% for Austrian. 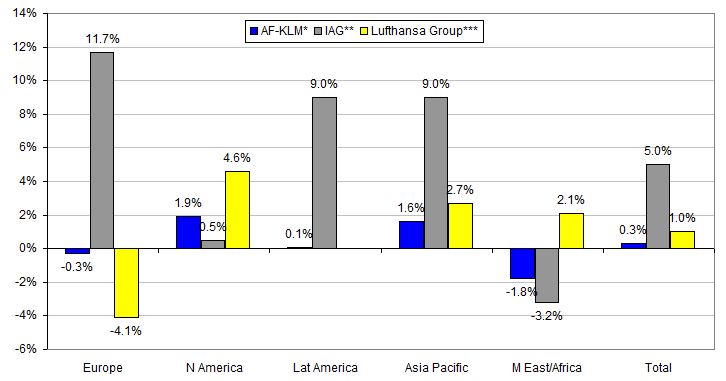 IAG's growth was strongest in Europe, where the group's ASKS increased by 11.7% (combining 10.3% growth in its domestic markets and 12.2% on international routes in Europe). Again, Vueling was a major driver here, but BA and Iberia together still grew by 9%. This was mainly thanks to resurgent growth by the group's Spanish legacy airline.

The Air France-KLM's group cut its ASK capacity in Europe by 0.3%, but this disguises a number of different trends in different market segments. The network airlines Air France and KLM cut European capacity by 1.7%, while Transavia grew by 5.1%. Within the group's medium-haul network business, there was a marked contrast between an 11.8% reduction in point to point capacity and an increase of 1.4% in its hub capacity.

The Lufthansa group's 4.1% ASK cut in Europe was the aggregate of all its passenger airlines. Lufthansa Passenger Airlines cut ASKs in Europe by 2.8%, but this includes LCC Germanwings (not separately reported). The mainline operation must have reduced its capacity much more heavily, given that Germanwings was continuing to grow by taking over point to point routes not involving the hubs at Frankfurt or Munich.

Among the major long-haul markets, the North Atlantic recorded the most cautious capacity growth. Air France-KLM added 1.9% more ASKs and IAG hardly grew at all (+0.5%). Lufthansa does not disclose separate figures for North and South America, but its ASK growth of 4.6% for the Americas is mainly driven by the North Atlantic, where its capacity is roughly four times its ASKs to Latin America (and also by increased frequencies by SWISS to Sao Paulo).

In Latin America, IAG's ASK growth of 9.0% was mainly the result of Iberia's resumption of growth after its restructuring, while Air France-KLM remained at last year's capacity level.

All three increased their capacity to Asia Pacific; IAG's 9.0% ASK growth led the way due to BA's increase in capacity to cities such as Tokyo (Haneda) and Seoul. Note that IAG's traffic data exclude South Asia from this region and so its growth does not include the impact of down-gauging aircraft size on BA's India network (IAG groups South Asia with Middle East and Africa). The Lufthansa group grew by 2.7% and Air France-KLM by 1.6% in Asia Pacific.

Both IAG and Air France-KLM cut capacity a little on routes to the Middle East/Africa (including South Asia for IAG), while Lufthansa group ASKs grew by 2.1%.

All three saw a decline in unit revenue (passenger revenue per ASK, RASK) in 1Q2015 compared with 1Q2014, measured at constant currency. In spite of its higher capacity growth, IAG experienced the smallest drop in RASK (-0.8%), while Air France-KLM's RASK fell 2.3% and Lufthansa's was down 2.5% (all references to RASK growth are at constant currency). However, in Europe, IAG's RASK decline of 4.1% compared unfavourably with an increase of 0.8% for each of the other two.

With the exception of North America, where they all enjoyed RASK growth (led by IAG's 5.0% increase), long-haul markets were weak for all of the Big Three. IAG's drop in RASK was the lowest of the three in Latin America, Asia Pacific and Middle East/Africa (which includes South Asia for IAG). Lufthansa had the heaviest fall in RASK in Asia Pacific and Middle East/Africa. 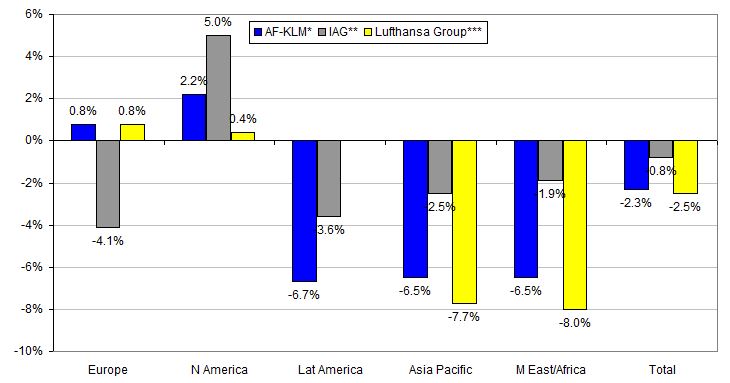 IAG gets better RASK growth from given level of ASK growth

The following chart is a scatter plot of 1Q2015 RASK growth (at constant currency) against ASK growth for the Big Three by region. The bold black line on the chart is the trend line for all the data points and demonstrates that, broadly speaking, the two variables were negatively correlated. In other words, RASK growth was strongest when ASK growth was at its lowest and vice versa.

This seems intuitive. Management can, and should, invest in and service product quality and ensure that its network is relevant to its passengers, but the simplest lever with which to manage RASK performance is capacity discipline.

The other three sloping lines on the scatter plot are the trend lines for the data points for each airline group. They also each demonstrate that the negative correlation between unit revenue growth and capacity growth held true at the level of the airline group in 1Q2015. The relative positioning of these three lines, with IAG's line (in grey) placed furthest up the chart, shows that IAG was able to generate a better RASK growth from a given level of ASK growth compared with the other two groups. 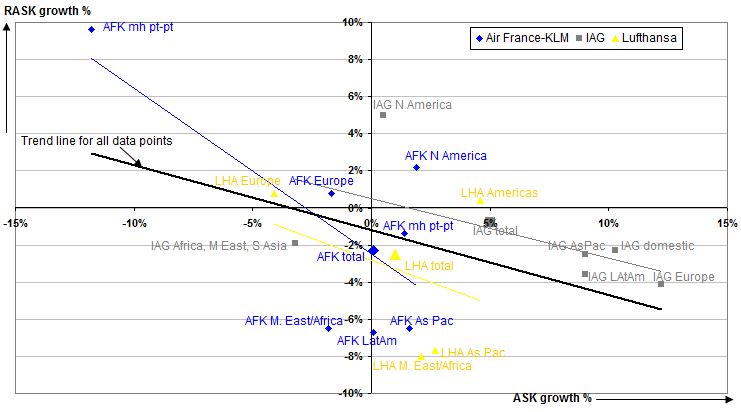 We could also have drawn trend lines for the data points pertaining to each of the regions. We have not done so, since the chart would become too busy, but looking at the chart with this in mind reveals some clear regional differences.

The Big Three were able to extract better RASK performance on the North Atlantic than in other regions, for a given level of ASK growth. Of course, the North Atlantic is tightly controlled by the three immunised joint ventures featuring each of the Big Three and this has certainly helped unit revenues for all. If a line were drawn through the three data points depicting the North Atlantic (treating Lufthansa's Americas as North America), it would have a steeper slope upwards from right to left than the overall trend line.

This suggests that slowing capacity growth on the North Atlantic has a greater positive impact on unit revenues than it does in other regions. This steep slope, with IAG at the top, may also reflect the strength of premium O&D demand for British Airways' transatlantic network from Heathrow and the relative weakness of demand for Lufthansa's network from Frankfurt, which is based more on lower yielding transfer traffic (with Air France-KLM sitting between the two).

IAG's Europe RASK is its weakest

IAG had the weakest RASK performance in Europe and this appears to be explained by its very high ASK growth within that continent. Vueling's still nascent Rome base, and a number of new routes, is a factor in both elements of this performance.

On routes to Asia Pacific and Latin America, IAG's strong growth was also accompanied by falling RASK. However, its RASK performance was considerably better than that of the other two, in spite of their much slower capacity growth in these two regions. This may reflect differences in market perception of the quality of the product and network of the different airline groups.

It also almost certainly reflects the relative impact on each of the Big Three of Gulf competition on Asia Pacific routes. In particular, IAG (BA) has a lesser dependence on the connecting traffic that has become more vulnerable to Gulf competition. This, together with its commercial relationship with Qatar Airways, appear to have given it a more robust position against these competitors than Air France-KLM and Lufthansa have in Asia Pacific markets.

The final regional difference to note concerns the Middle East and Africa networks of the Big Three (in IAG's case, this also includes South Asia). The data points representing these regions are, broadly speaking, at the bottom left frontier of our scatter plot. This means that RASK performed more weakly, for a given level of ASK growth, than it did in other regions. Again, it is likely that Gulf competition played a part in this.

Air France-KLM, Lufthansa's weak RASK highlights competitive challenge, but IAG should not rest on its laurels

Returning to the trend lines drawn on the chart for each of the airline groups, the line for Air France-KLM (in blue) is distorted by an outlier, the data point representing its medium-haul point to point network (excluding Transavia).

Here, it cut ASKs by 11.8% and enjoyed a RASK increase of 9.6%. The other two groups do not report an equivalent data point going into this level of detail within their European networks.

Without the subdivision of Air France-KLM's Europe network into medium-haul point to point and medium-haul hubs, the scatter plot for the group would take on a more random nature and its trend line would even slope very slightly upwards from left to right.

This suggests that Air France-KLM is struggling with pricing on its long-haul network (with the exception of North America), regardless of its stance on capacity growth. Even if it cut capacity across its entire long-haul network as it did on its Middle East/Africa network, it is possible that it may not improve unit revenues by very much.

It is undoubtedly prudent for Air France-KLM to be maintaining tight capacity discipline, but its RASK weakness appears to be rooted in a deeper malaise. Competitors are winning the game against Air France-KLM on routes to Asia Pacific, Latin America and Middle East/Africa. This suggests fundamental problems with its product and network may be preventing Air France-KLM from generating more healthy unit revenue.

The same appears to be true for the Lufthansa group. Lufthansa's 1Q2015 RASK performance (at constant currency) in Asia Pacific and Middle East/Africa was even worse than Air France-KLM's (as was Lufthansa's overall RASK performance). The one sense in which Lufthansa can feel slightly more hopeful is that it also grew capacity more rapidly than Air France-KLM and so the option of turning the capacity tap off more tightly remains available to it.

As for IAG, although it emerges from this analysis much more strongly than both Air France-KLM and Lufthansa, there is no room for complacency. The negative impact of high capacity growth on RASK was clear to IAG from its European data.

Moreover, although its overall RASK fell at a lesser rate than those of its competitors, falling unit revenue in what is a relatively healthy stage of the aviation cycle should sound alarm bells ahead of any downturn, when it can plummet dramatically.