IAG has its best ever profit in 2015, helped by fuel and strategic vision and pragmatism

In 2015 IAG achieved a return on invested capital of 12.7% against its estimated cost of capital of 10%, giving it the rare distinction among European legacy airline groups of creating economic value for investors. As with other airlines its 2015 results were helped by lower fuel prices, but IAG's strong improvement owes much to its determination to stick to its goals.

It was the first (arguably the only) airline among the larger European legacy groups to tackle labour cost restructuring. In addition, its 2013 acquisition of Vueling gave it an advantage over Air France-KLM and Lufthansa in dealing with the short/medium haul threat from LCCs. On long haul, it has avoided anti-Gulf airline rhetoric with its Qatar Airways partnership, including codeshare and an equity stake. On the North Atlantic, it is now benefitting from its acquisition of Aer Lingus.

There is more to do. Although Iberia's restructuring has been impressive, its returns still lag those of other IAG airlines. Labour unit costs increased at both British Airways and Vueling in 2015. Moreover, IAG's profitability falls short of its own targets for 2016-2020, and the profitability achieved by the leading European LCCs. Nevertheless, it can be substantially pleased with its progress.

IAG: capital efficiency can help a European legacy airline group to "show me the money"

IAG's 2015 financial results were its best ever. Net profit increased by 51% to EUR1,516 million, while the pre-exceptional operating result jumped by 68% to EUR2,335 million. Excluding the contribution of Aer Lingus to the group from 18-Aug-2015, the operating result was EUR2,300 million, in line with IAG's guidance range of EUR2.25 billion to EUR2.3 billion.

Revenue grew by 13% to EUR22,858 million, and the operating margin gained 3.3ppts to 10.2%, the first time it has reached double figures. After Icelandair's reported 11.9%, this makes IAG only the second European legacy airline so far to report a double-digit operating margin for 2015, although there are still a number yet to report.

Among the Big Three legacy airline groups in Europe, Air France-KLM achieved a margin of 3.1% and Lufthansa has not yet reported, but consensus forecasts suggest that it is unlikely to reach a double-digit margin (its 2015 annual report is due on 17-Mar-2016). IAG's margin compares favourably with CAPA's estimated average global airline operating margin of 7.2% in 2015 (new high for the world's airline industry).

Since posting losses in 2012 IAG has grown its net result and operating result every year, with an overall improvement in both of around EUR2.4 billion in three years. In 2011 IAG set a 2015 operating profit target of EUR1.5 billion.

Allowing for the addition to the group of Vueling in 2013, and Aer Lingus in 2015, the like-for-like improvement from 2012 was almost EUR2.2 billion. 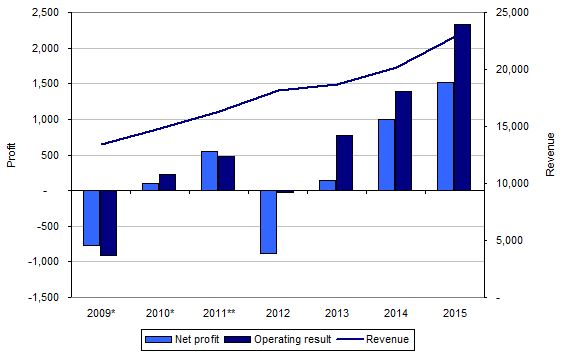 Aer Lingus made a first-time contribution to the group operating result of EUR35 million, for the period from its acquisition by IAG on 18-Aug-2015 to the end of the year. For the full year, Aer Lingus improved its operating profit by 72% to EUR124 million. 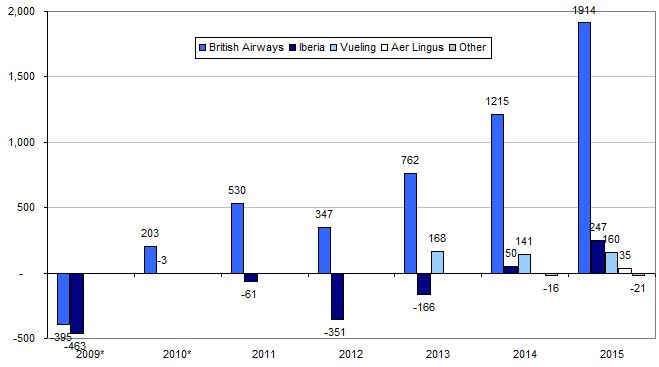 Aer Lingus' 7.2% margin (up 2.6ppts) was its best for at least a decade. Only Vueling suffered deterioration in its operating margin: a reduction of 0.2ppts to 8.1%. This was its second successive fall in operating margin, but it was still the second best in the group.

Iberia: the Futuro looks bright for IAG's star pupil as its confidence and growth are transformed 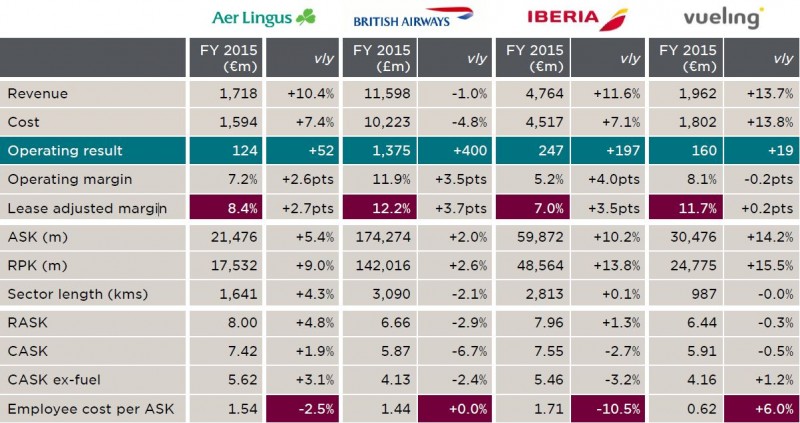 Net debt is growing but so is liquidity, and IAG is now paying dividends

IAG’s on-balance sheet net debt grew by EUR1.1 billion, or 66%, in 2015 to EUR2.8 billion at year end, largely reflecting the Aer Lingus acquisition and exchange rate movements. Adding capitalised operating leases to this, the adjusted net debt increased by EUR2.4 billion, or 40%, to EUR8.5 billion, due to the operating leases of Aer Lingus and an increase in leased aircraft for BA.

As a result of its improved profitability and healthy liquidity, IAG has proposed a final dividend to shareholders of EUR0.10 per share, to be paid in addition to an interim dividend of the same amount already paid. This will bring the total dividend to EUR0.20 per share for 2015, the first year in which IAG has paid dividends.

This puts it among a relatively small, but growing, group of airlines that pay dividends. 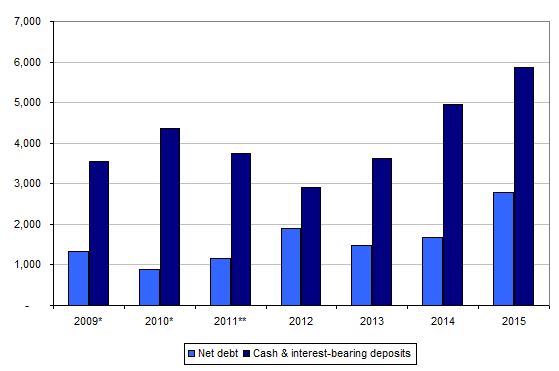 IAG increased total ASKs by 8.2% in 2015, with RPKs up 9.6% and passenger load factor up 1.0 ppt to 81.4%, the group's highest ever load factor. Passenger numbers were up 14.2% to 88.3 million. Passenger growth was faster than RPK growth, reflecting the disproportionate increase in short haul traffic, mainly driven by Vueling. 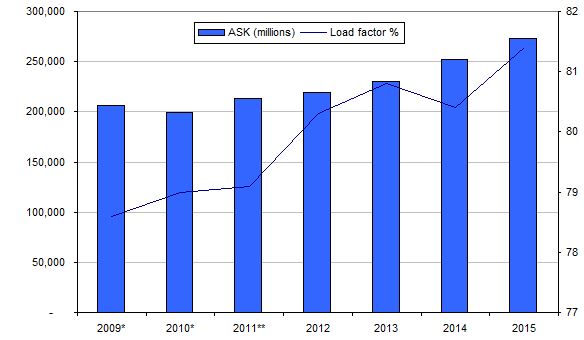 Total revenue growth of 13.3% was faster than the 8.2% ASK increase and was driven by a 14.2% rise in passenger revenue. The total impact of foreign exchange effects on revenue was a benefit of EUR1,917 million.

Total revenue per ASK grew by 4.6%, boosted by currency movements. At constant exchange rates and excluding Aer Lingus, the underlying RASK performance was reduced by 4.1%. Underlying passenger RASK fell by 3.7%.

All of IAG's airlines contributed to revenue growth, although BA's revenues in GBP actually declined by 1.0%. Due to the strength of GBP versus EUR, this BA revenue performance translated into a 9.7% increase in EUR terms.

IAG said that passenger unit revenue reduction (at constant currency) "follows a pattern of industry growth in a falling fuel cost environment, allowing the airlines to increase margins despite lowering fares". Underlying yields fell at BA and Iberia due to pressure from lower fuel prices, particularly on oil-related routes, and "economic uncertainty" and currency weakening in Latin America, Africa and the Middle East, although "revenue performance still remained strongest in our main key market, North Atlantic".

At Vueling yield pressure weighed less, a reduction of 1.5%, thanks to its relative strength in its domestic market. Aer Lingus yield was up since the acquisition, thanks to strength on the North Atlantic.

Total operating costs before exceptional items increased by 9.3%, faster than the increase in ASKs, but slower than growth in revenue. Fuel costs grew by only 1.6%, in spite of the increased capacity. According to CAPA calculations, IAG's fuel bill was almost EUR400 million lower than it would have been at the average fuel cost per ASK that the group paid in 2015.

Non-fuel costs outpaced ASK growth, with an increase of 12.9%. However, costs were adversely affected by foreign exchange effects to the extent of EUR1,828 million (EUR89 million less than the revenue boost from currency movements).

Labour unit cost increased in 2015, but the longer term trend is reduction

IAG's labour costs grew by 13.4% in 2015, faster than ASK growth and also faster than the 2.3% increase in headcount. The increase in average employee numbers mainly reflected the Aer Lingus acquisition, with headcount reduction at Iberia balancing growth at Vueling.

There was a 10.8% increase in labour cost per employee to EUR80,600. This more than offset the benefit of improved labour productivity, defined as ASK per employee, which rose by 5.8%. The result was that employee costs per ASK grew by 4.8%.

Moreover, since the creation of IAG in 2011 productivity measures have improved. From 2011 to 2015 employee cost per ASK fell by 0.9%, thanks to a 19.4% improvement in ASK per employee offsetting an 18.3% increase in average labour cost per employee. Furthermore, revenue per employee has jumped by 30.5% over this period.

RASK grew faster than CASK in 2015

For IAG, 2015 was the first year since 2012 that both total RASK and CASK increased. At that earlier time, CASK grew faster than RASK and the group recorded an operating loss (this was compounded by an increase in fuel CASK, but non-fuel CASK also grew).

In 2015, the improved operating result was achieved because RASK growth outpaced CASK growth, even after taking account of lower fuel prices. RASK was up 4.6%, while CASK was up just 1.1% and ex fuel CASK was up 4.3%. As noted above, both RASK and CASK were inflated by currency movements and so – the underlying trend in both was downwards. Nevertheless, the difference between the two was positive for profitability.

Much of IAG's profit improvement in recent years can be attributed to improved efficiency with labour costs. However, BA's employee unit costs rose in 2015 due to salary increases and pension costs, and Vueling's grew as a result of a new crew agreement and increased costs of new bases.

Both BA and Vueling will soon have new CEOs. Alex Cruz will move from Vueling to take over from the retiring Keith Williams as CEO at BA, and he will be replaced at Vueling by Javier Sánchez-Prieto. As CAPA has noted previously, both airlines will need to maintain a strong cost discipline. 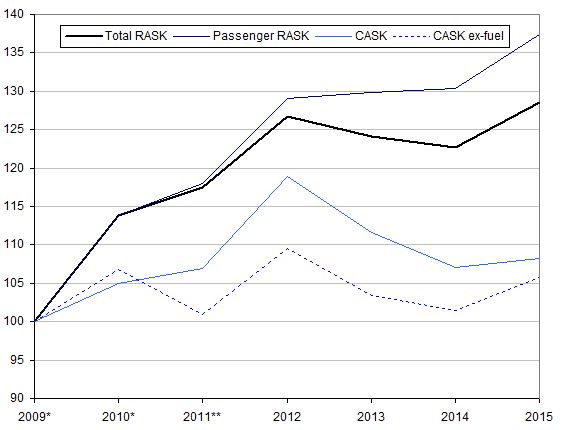 Medium term goals are in sight

For 2016 IAG expects to increase its operating profit by a similar absolute amount to the improvement achieved in 2015; in other words – an increase of around EUR945 million. This would take the operating profit to almost EUR3.3 billion in 2016.

It also expects its fuel bill to be EUR4.8 billion in 2016 – based on IAG's hedging programme, current fuel prices and exchange rates. According to CAPA calculations, this is around EUR1.7 billion lower than it would be if there was no further change in fuel cost per ASK from 2015 levels.

IAG's profit guidance implies that a significant proportion of expected fuel cost savings will be passed on to passengers as lower unit revenue.

With uncertainties surrounding the world economic outlook, IAG is right to be cautious about unit revenues. Nevertheless, in spite of this, and only partly thanks to lower fuel prices, it is an indication of its strong financial progress that it is now in line to achieve results consistent with its medium-term goals: an operating margin in the range of 12%-15% and a return on invested capital of 15%.