IAG delivers strongest result of the ‘big three’, as sales soar in 1H

International Consolidated Airlines Group (IAG) reported a pre-tax profit of EUR39 million in the six months to 30-Jun-2011, a sharp turnaround over 2010’s result when the group posted a EUR419 million loss. IAG’s result is the strongest of Europe’s “big three” network carriers, which also includes Air France-KLM and Lufthansa.

IAG reported an operating profit of EUR32 million (1HY2010: EUR-309 million) and profit after tax of EUR71 million. The net result compares with 1HY2010’s after tax loss of EUR352 million, which was affected by the ash cloud crisis of Apr-2010. Strong revenue gains, particularly in the long-haul premium segment, and prudent cost control measures, drove earnings in the period, and were strong enough to counter the spike in fuel costs. Within the group, however, clear differences have emerged between British Airways and Iberia, with the latter struggling to match the performance of its larger partner.

Relative to its counterparts Air France-KLM and Lufthansa, IAG delivered a strong set of results. Air France-KLM and Lufthansa were battered by either price of fuel and/or wrong-way bets on the commodity, ongoing market uncertainty and crises in North Africa and the Middle East. They both revised down growth targets for the winter schedule. IAG left its ASK growth plans “essentially unchanged” but added “we are currently evaluating some reduction in capacity growth for the winter”. "Looking at the financial reports of some of our competitors, at first glance it would appear that we are doing slightly better ... because we are working harder," Mr Walsh said.

CEO Willie Walsh stated the group expects “significant growth in operating profit this year, with improvements in both our unit revenue and unit cost performance versus 2010 and are on track to reach our synergy targets. Our long-haul business is stable, with strength in the premium sector, but the short-haul European market remains highly competitive". Events in Japan and North Africa and the Middle East are expected to have a negative affect on operating profit for the full year of EUR90 million to EUR100 million, according to Mr Walsh.

IAG recorded strong gains in revenue in 1HY2011. Total revenue increased 17.9% to EUR7.77 billion. Within that figure, passenger revenue grew 18.6% to EUR6.45 billion, and IAG’s cargo revenue defied the wider industry slowdown, increasing 16.3% to EUR592 million. Passenger revenue grew over three times faster than growth in passenger numbers, which increased 6.2% in the period to 24.8 million, reflecting the vast improvement in the pricing environment that returned in the period. Load factors increased slightly, with IAG closely matching demand and capacity. ASKs increased 10.4% and RPKs increased 10.7%, pushing up loads by 0.2ppt to 76.9%. Unit revenues (per ASK) increased 7.5% to EUR 8.02 cents and yield (per RPK) increased 7.2% to EUR 6.17 cents.

The strong revenue result was driven by the group’s continued strength in corporate travel markets, particularly in the internationally focussed and high-yielding London market, which remains very resilient “against a background of economic uncertainty”, according to Mr Walsh. British Airways has made significant investments in its long-haul premium cabins in recent years, an effort which was undertaken in the wake of the global financial crisis which hurt premium-reliant carriers such as BA and there were question marks over whether previously-seen levels of corporate travel would return. London is the world’s largest premium and corporate travel market and understandably holds particular significance for British Airways. The bet paid off, with premium traffic increasing “substantially” more than non-premium in the first half, which bolstered unit revenues and yields. 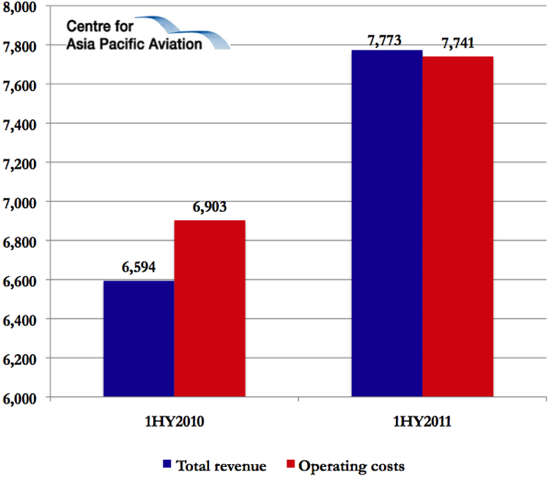 In its long-haul business, the North American market, where BA and Iberia now have a joint venture in place with oneworld partner American Airlines, was the strongest performing, with RPKs increased 16% year-on-year. IAG noted that the alliance allows routes to be operated at lower prices across the Atlantic than the airlines would be able to achieve independently. "Customers are also directly benefitting through airline website cross-selling, more fare and schedule choice on overlapping long-haul routes and easier access to more destinations via new codeshares,” Mr Walsh said. He said he had seen "no evidence" of any slowdown on North American routes, which contrasts with the SkyTeam trans-Atlantic joint venture complaining of overcapacity on North American routes. This is likely a reflection of the strength of the London-US corporate travel market, which remains far larger than US-Paris. “Our performance on the trans-Atlantic is clearly better than the competition," Mr Walsh noted.

British Airways continues to carry the group, delivering all earnings, as Iberia suffers from high levels of competition from LCCs and high-speed rail, high costs and subdued market conditions in Spain. British Airways reported an operating profit of EUR210 million in the period on revenues on EUR5.43 billion, a 3.9% operating margin. Iberia reported a EUR78 million loss on revenues of 2.13 billion, a -3.7% operating margin. 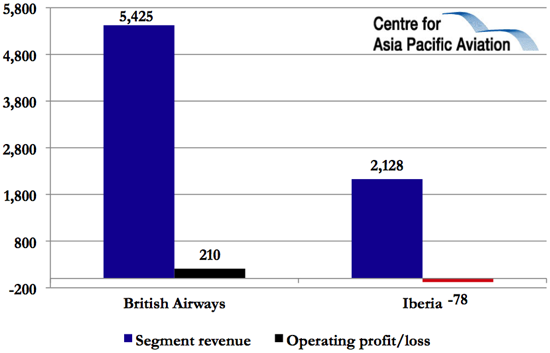 While conditions across the UK aren’t much better than those in Spain, the London market continues to be a shining light and British Airways’ dominance of this market is a major strength of IAG’s. It is something rivals Lufthansa and Air France are unable to leverage at Frankfurt and Paris, respectively. Few other airlines have such leverage to premium travel and BA has benefitted from a 30% increase in premium bookings and corporate balance sheets on both sides of the Atlantic look healthier as business confidence returns. This strength in long-haul and premium bookings helped compensate for difficult conditions in Europe.

A highlight of the result and a key reason for the group’s return to profitability is its prudent control over costs, something that is perhaps not surprising with Willie Walsh at the helm. Despite the marked and sudden spike in fuel prices, another, albeit more minor, ash cloud event and the group’s increasing capacity (ASKs) by 10.4%, total operating costs increased only 12.1% in the six-month period, to EUR7.74 billion.

Fuel was the largest contributor to IAG’s higher operating costs. Fuel and oil expenses increased 34.8% to EUR2.44 billion, accounting for 31.5% of IAG’s total operating costs, up from 26.5% a year ago. Fuel unit costs increased 18.8%, net of hedging benefits. IAG benefitted from the strengthening euro, which lowers its US-dollar denominated expenses such as fuel. Mr Walsh said that “over time we [IAG] are going to pass on the increase in the fuel price to our customers".

IAG is 50% hedged for the next 12 months at USD93 per barrel, which compares favourably against a current spot price of around USD117. The group managed to recover 50% of the first-half increase in fuel costs through "revenue initiatives", such as fuel surcharges. IAG said such recovery "becomes progressively harder through the year as we face tougher revenue comparables with last year.” The CEO warned that “the days of cheap air travel are over” as there has been a "structural shift in the price of oil". "The industry is going to have to price in USD120 oil. As a percentage of our cost base, it's 32%. For the low-cost guys it's more like 50%. It is such a big part of an airline's costs that fares will have to go up," Mr Walsh said.

Despite the higher costs across the board, growth in costs was offset by the airline’s growth, which drove down unit cost. Total unit costs increased 0.8% due to the higher cost of fuel. Ex-fuel costs fell sharply, down 5.6% to EUR5.08 cents. The ex-fuel unit cost decreased is a testament to IAG’s rigorous oversight of cost items. “There's very little we can do about fuel costs but what we can do is try and manage our controllable costs in the non-fuel areas and I think we've done that well,” Mr Walsh said. He stated IAG is “already making cost savings through joint procurement in areas such as insurance and airport handling. We have established a single cargo business and introduced integrated sales and airport teams in several key markets. Customers are also directly benefiting through airline website cross-selling, more fare and schedule choice on overlapping long-haul routes and easier access to more destinations via new codeshares.”

IAG stated it expects “significant growth in operating profit” in FY2012, “with improvements in both out unit revenue and unit cost performance versus 2010 and [we] are on track to reach out synergy targets”. The group said it “made significant progress in the delivery of both [its] first year synergies and the planning and commencement of the longer term changes required across the group”, which are expected to delivery its five year target of EUR400 million of revenue and cost synergy benefits.

Net debt was halved in the period, falling EUR415 million to EUR480 million. Cash and cash equivalents fell EUR161 million to EUR4.19 billion from 31-Dec-2010. Adjusted gearing has therefore fallen to 42%, from 47% in the prior year.

Unlike its rivals, IAG’s 2011 growth plans remain essentially unchanged, although the group is evaluating some capacity reduction for winter. ASKs are expected to increased 7-8%, or 4-5% on an underlying basis.

IAG’s result came in at the upper end of market expectations and follows disappointing performances by rivals Air France-KLM and Lufthansa. IAG shrugged off sharp fuel prices increases to end of the quarter firmly in the black on the back of strong revenue growth, driven by the premium segment. Despite various headwinds, most notably from the Spanish unit, IAG is well poised to deliver the strongest full-year result of Europe’s “big three” network carriers. Rigorous cost control, ongoing synergy realisation and a strengthening corporate travel market should lead to favourable year-on-year comparisons and drive earnings.