How foreign airlines have kept Australia open through the pandemic

The reopening of Australia’s international border on 01-Nov-2021 caps an unprecedented and tumultuous period in Australia’s aviation history.

The imposition of entry bans and mandatory hotel quarantine for arriving passengers came into effect in late Mar-2020, creating arguably the most challenging international operating environment, commercially and logistically, for airlines serving Australia.

Foreign airlines have shouldered the burden of returning Australians

Of the airlines that stayed in the market, foreign carriers transported by far the most passengers, according to data from the Australian Government’s Bureau of Infrastructure and Transport Research Economics (BITRE).

Between Apr-2020 and Aug-2021 (the latest month for which international arrivals data is available from BITRE), some 1.52 million passengers were transported in and out of Australia, including 618,401 inbound passengers and 902,345 outbound.

The tally was bolstered for Australia and New Zealand-based carriers by the (short-lived) open border arrangement between Australia and Zealand in 2021.

Thanks to the arcane international aviation system, the Australian airlines can't "hub" their services over a foreign point. They can only operate to and from individual destinations, making long haul operations more complex – one of the many reasons that this pandemic shock should lead to changes in the 75-year-old international rules.

Air New Zealand transported 406,812 passengers in the 17-month period between Apr-2020 and Aug-2021, including approximately 50,000 passengers who travelled under the capped flights programme.

Capped flights made the task even more burdensome financially

The challenge for carriers that remained in the market was made sterner when, based on the requirements of State governments, the Australian Government brought in tight arrival caps for international passenger flights from 04-Jul-2020. This triggered complex and onerous operational and commercial restrictions on airlines, prompting some to withdraw from the market.

But for those that remained, over the next 485 days to 31-Oct-2021, international airlines operated 10,000 capped commercial passenger flights into the major capital city airports, serving over 300,000 arriving passengers, most of whom were returning Australians, according to the Board of Airline Representatives of Australia (BARA) a membership body for airlines serving Australia. (International airlines operated 1,200 passenger flights for 57,000 arriving passengers from April-2020 to June 2020, prior to the capped flights regime).

The average number of passengers on a flight – mostly widebodies with over 300 seat capacity – was just 30, which over the last two months has been driven down to 10 or less per flight.

“Throughout the pandemic international airlines operated capped passenger flights into the major capital city airports under the most challenging commercial and operating conditions. The numerous cuts to the per flight caps made by government, unilaterally and often with little notice, caused considerable stress and problems for Australians overseas and for international airlines", said Barry Abrams, Executive Director of BARA.

“International aircrews also complied with extensive infection control procedures and strict quarantine arrangements on layover between flights. Differing requirements across state jurisdictions added to the difficulties and costs faced by international airlines. Operating 10,000 flights for 300,000 passengers under such challenging circumstances is a remarkable contribution by international airlines in supporting Australia and its people”, he added.

A total of 19 airlines transported passengers in each of the 17 months between Apr-2020 and Aug-2021, and a further seven airlines operated non-passenger services (often passenger-to-cargo aircraft flights) in the period.

A mix of freighter and cargo-only passenger services by airlines continued to ensure Australian trade channels remained open, supporting the movement of essential medical supplies and Australian producer and exporter deliveries around the globe. A number of these flights qualified for financial assistance through the Federal Government's International Freight Assistance Mechanism (IFAM), which helped cover airline operating costs.

Airlines maintained overall air freight tonnage to about 80% pre-pandemic levels at some 77,000 tonnes on average per month, according to BARA. This air freight facilitated vital supplies of medical and personal protective equipment, especially in the early days of the pandemic and the online purchasing boom as the pandemic continued. 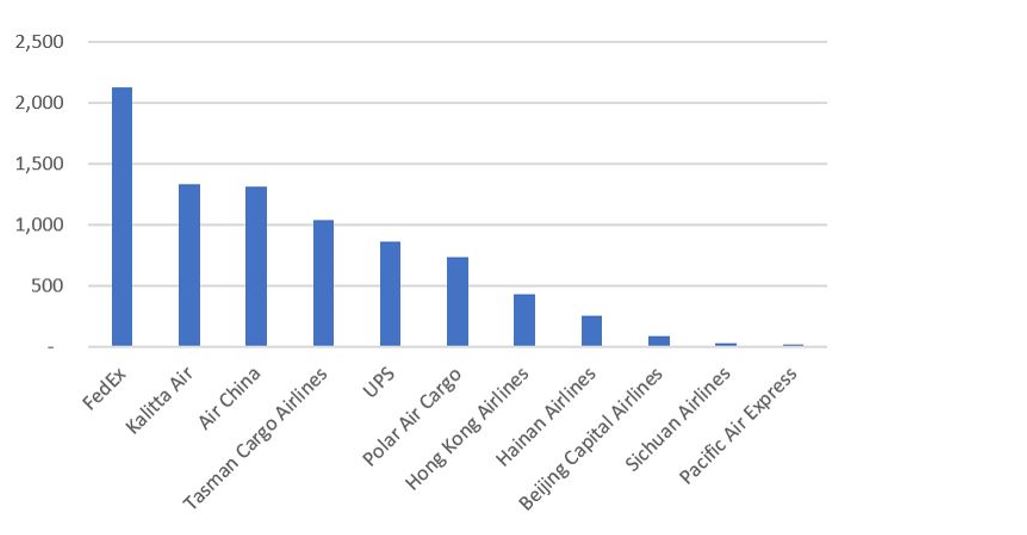 There are some 150,000 seats scheduled to/from Australia from early Nov-2021, marking the first step up in capacity since the short-lived Australia-New Zealand quarantine-free travel period in Apr-Jul-2021.

As shown in the green line in the chart below, this remains well below 2019 levels (yellow line) and it will take many months to recover to those quantities.

Almost 50,000 seats per week in total are currently scheduled into Sydney and Melbourne airports from early Nov-2021 – more than the reported 38-47,000 Australians overseas seeking to return home.

“The situation for Australians overseas to return home will become clearer over the coming days but the scheduled seat capacity is more than sufficient. Subject to approval by government, flights and seats are available to support the return of international students and economic visa holders, and then international tourists, as envisaged under the National Plan”, said BARA.

Australian outbound travellers from states that have reached the 80% vaccination double-dose threshold are also expected to take advantage of the easing of restrictions to travel abroad, filling some of the outbound seats on offer.

Three days prior to arriving into Australia, passengers require a negative COVID-19 test in their country of departure - a requirement that could dampen demand, especially discretionary travel. In countries in such as the UK, there is testing on arrival rather than pre-departure, which provides greater certainty for passengers to be able to return home.

Now to encourage airlines back

Throughout the pandemic, health concerns have – rightly – trumped the interests of airlines.

But now there is the prospect of further opening, much more attention will need to be paid to ensuring that doors are sufficiently and intelligently opened, so that airlines will be tempted to reintroduce capacity into the market.

As a remote island nation, Australia’s reliance on air transportation is much greater than it is for most. Getting back, even to 2019 levels, will not occur in 2022, and meanwhile the impact on the Australian economy will be keenly felt.

That will be the next major issue to face; but for now the direction is positive.