Hong Kong travel demand has experienced a seismic shock from the civil unrest that has swept the special administrative area. This has had major ramifications for airlines, particularly Hong Kong-based Cathay Pacific and Hong Kong Airlines. Both have experienced a plummet in demand, prompting major capacity cuts that have been extended into 2020.

It is not yet clear what the full financial impact will be for the airlines.

For the Cathay group airlines and Hong Kong Airlines the loss of traffic and revenue hit when they were already in fragile financial condition – particularly so, Hong Kong Airlines – and broader economic concerns are also growing for Asia’s airline industry.

The Hong Kong protests began in Jun-2019, sparked by opposition to controversial extradition legislation. Although this bill was eventually withdrawn, the protesters had moved beyond this issue to a list of five demands that are even less palatable to authorities. The protests and police response steadily escalated, with violence and even loss of life.

In terms of travel demand, the turmoil on Hong Kong’s streets has obviously dissuaded potential tourists. Business travel has also been affected, and some major conferences scheduled for Hong Kong have been cancelled –including a meeting of Asian airline CEOs that was to have been hosted by Cathay Pacific on 21/22-Nov-2019.

The civil unrest directly affected Hong Kong International Airport (HKIA) when protesters occupied the terminal for a few days in August, causing mass cancellations and operational disruptions. Since then, entry to the terminal has been restricted to ticketed passengers who are travelling within 24 hrs.

Statistics for HKIA from CAPA and OAG highlight how airlines are pulling out capacity in response to weaker demand. Capacity at the airport – measured by seats – was largely tracking at, or slightly above, 2018 levels through late Aug-2019. After that, weekly seat numbers plunged below 2018 and 2017 levels. 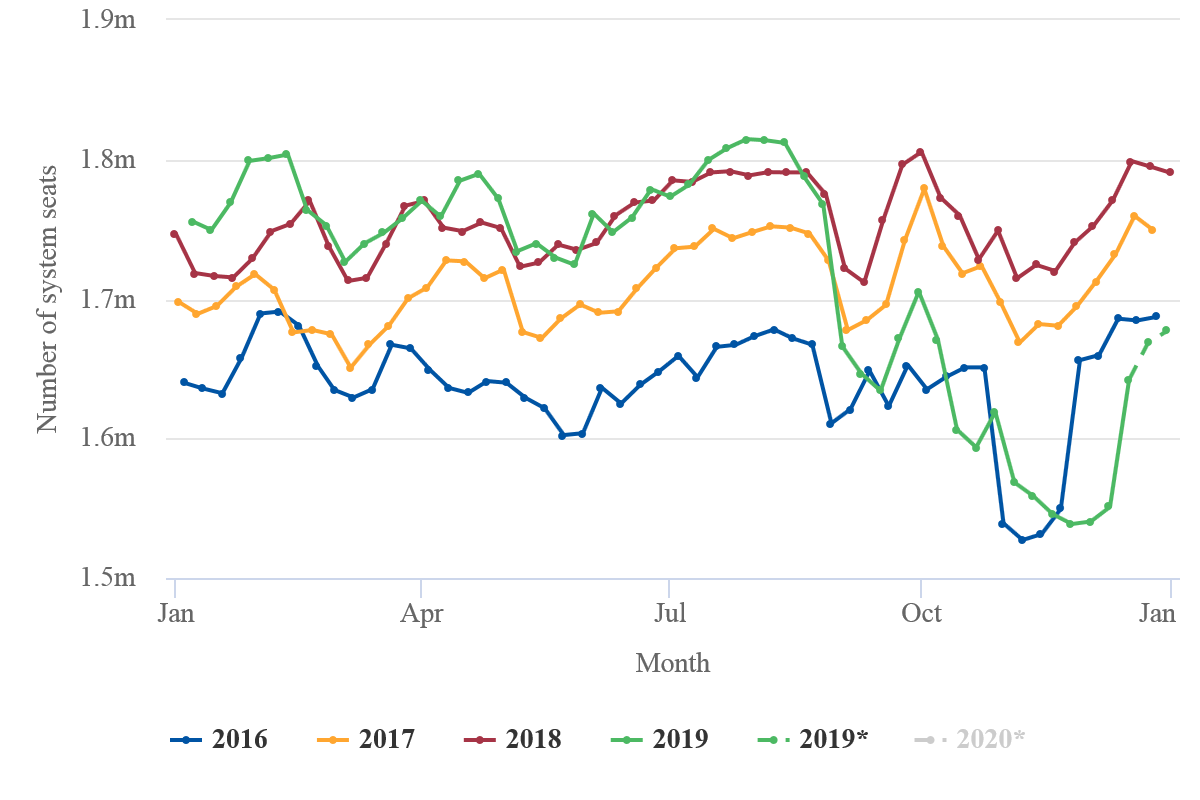 This drop marks a significant break in a long term growth trend at HKIA.

Total seats at the airport have increased every year since at least 2012, CAPA and OAG data show. 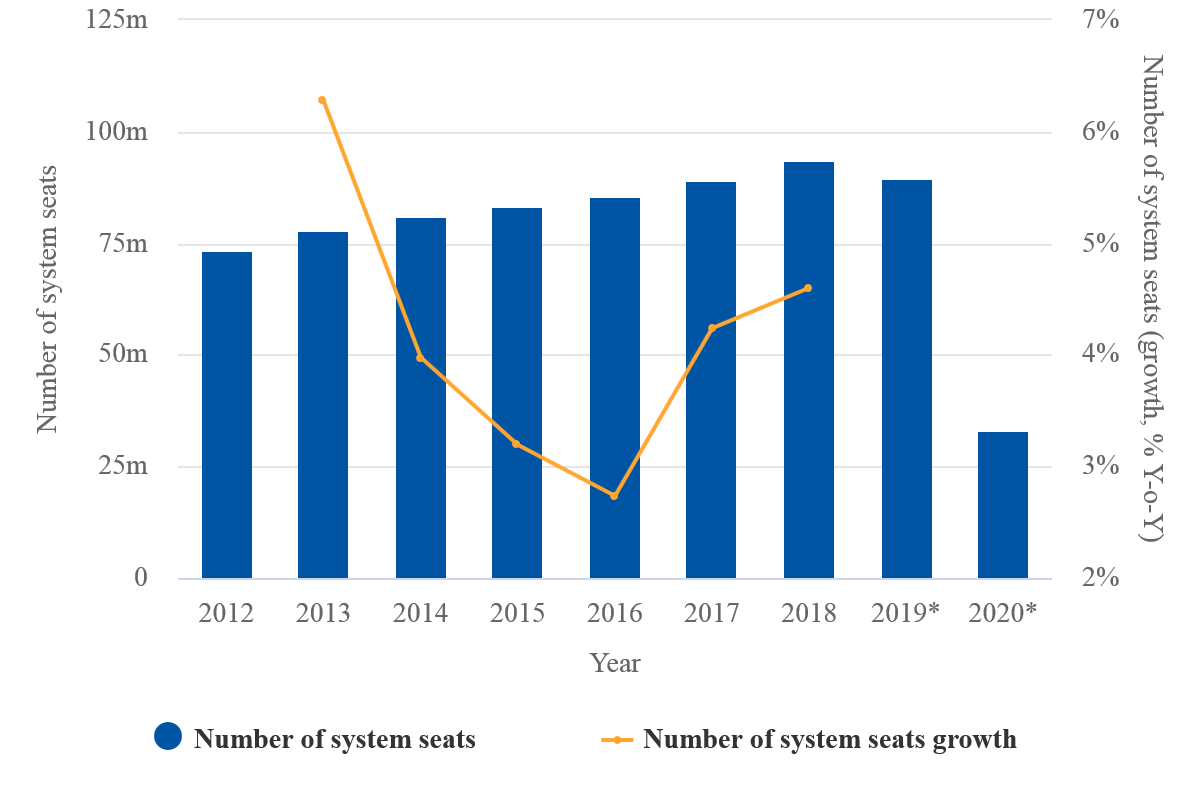 [Footnote: * values for these years are at least partly predictive up to 6 months from 09-Dec-2019 and may be subject to change.]

Unsurprisingly, the Hong Kong-Mainland China market is particularly hard hit by the demand and capacity declines. This is problematic, since China also accounts for the largest share of seats departing HKIA, with 17.7% of the total for the week of 2-Dec-2019.

For the same week, total seats between Mainland China and Hong Kong were reduced by 22.4% year-on-year, according to CAPA and OAG data. All 14 airlines on this route cut capacity, with the China-based airlines generally experiencing larger declines than those from Hong Kong.

For example, Air China and China Eastern both had 44-48% fewer seats to Hong Kong. The largest player in the Hong Kong-China market is Cathay’s subsidiary Cathay Dragon, whose share rose to 51.8% as its seat decline of 7.5% was exceeded by most other competitors.

Non-Hong Kong airlines are able to shift capacity to other markets.

Qantas, for example, decided to downgauge aircraft types used on its Hong Kong routes, shifting A330-300s to growing markets such as Singapore and Manila. Hong Kong authorities have reportedly offered to relax minimum usage requirements for the highly sought-after slots at HKIA, allowing airlines to reduce frequencies temporarily without losing their slots.

However, the situation is more dire for Hong Kong-based airlines. The fortunes of airlines such as Cathay Pacific and Hong Kong Airlines are inevitably tied to their HKIA hub, however much transfer traffic they might be able to carry.

For Cathay Pacific, the demand disruption came at a time when it was still vulnerable.

The airline had implemented a three-year recovery programme in 2017 due to weaker earnings. These efforts were yielding significant improvement when the latest troubles hit. Political fallout from the protests also caused the exit of CEO Rupert Hogg, who has been replaced by Augustus Tang. It will now be a major challenge for Cathay to avoid having its hard-won recovery derailed.

Cathay had a 34.2% share of seats at HKIA for the week of 2-Dec-2019, rising to more than 56%, including its subsidiaries Cathay Dragon and Hong Kong Express (see chart below).

The airline reports significant weakness in inbound demand. Its transit traffic connecting other international markets via HKIA has held up more strongly, although this tends to be lower yielding. 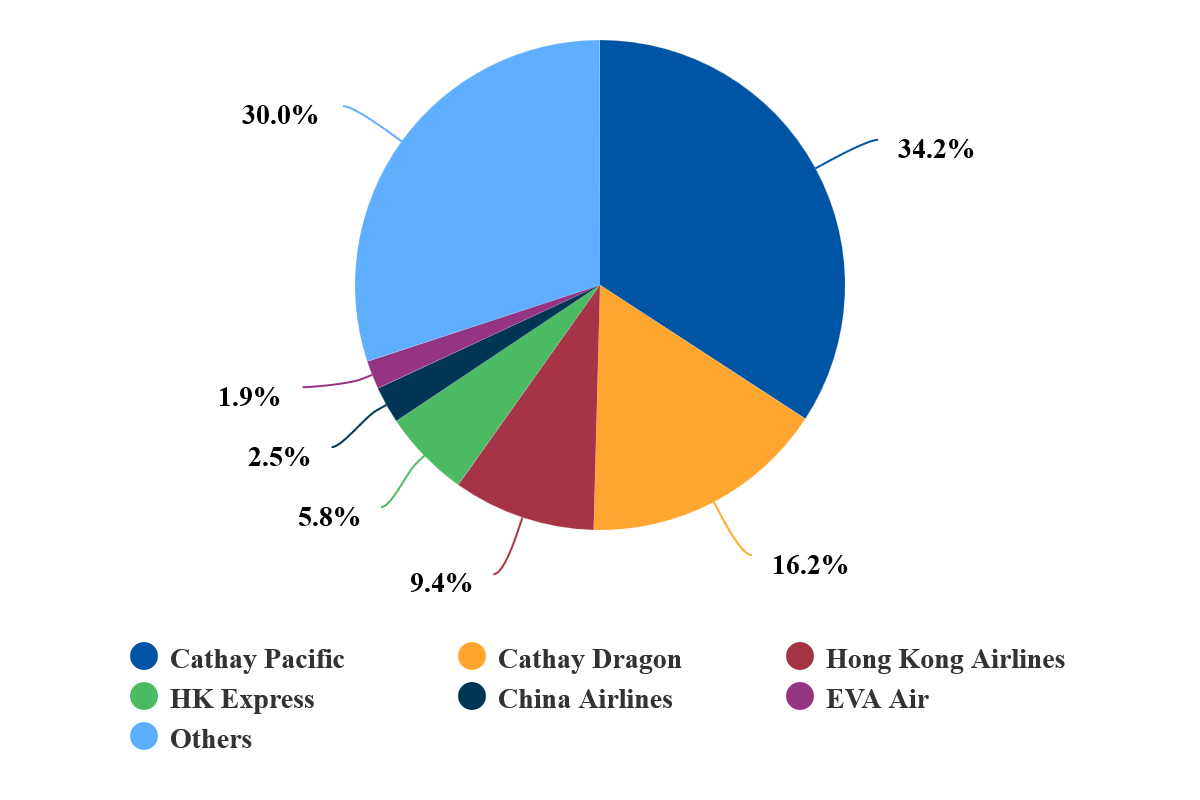 Cathay has cut its capacity in response to weakness in inbound demand. The airline has already reduced capacity for its winter season, which extends from the beginning of October to the end of March.

The chart below shows that total seats for the Cathay Group were tracking above 2018 levels through about September, but have been reduced by 3.8% year-on-year as of the week of 2-Dec-2019. 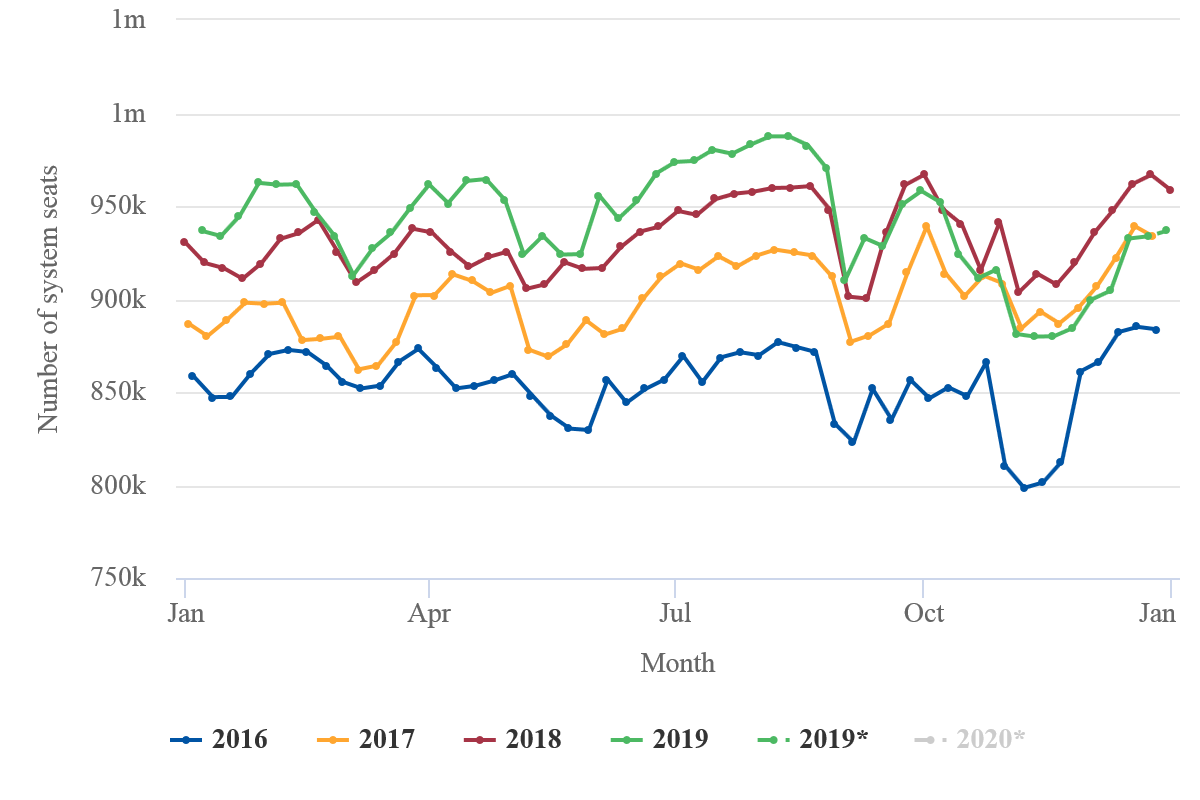 The Cathay Group is set for its first annual capacity decline in many years.

Cathay group seats and percentage growth year-on-year: seat capacity will have fallen by nearly 1% in 2019 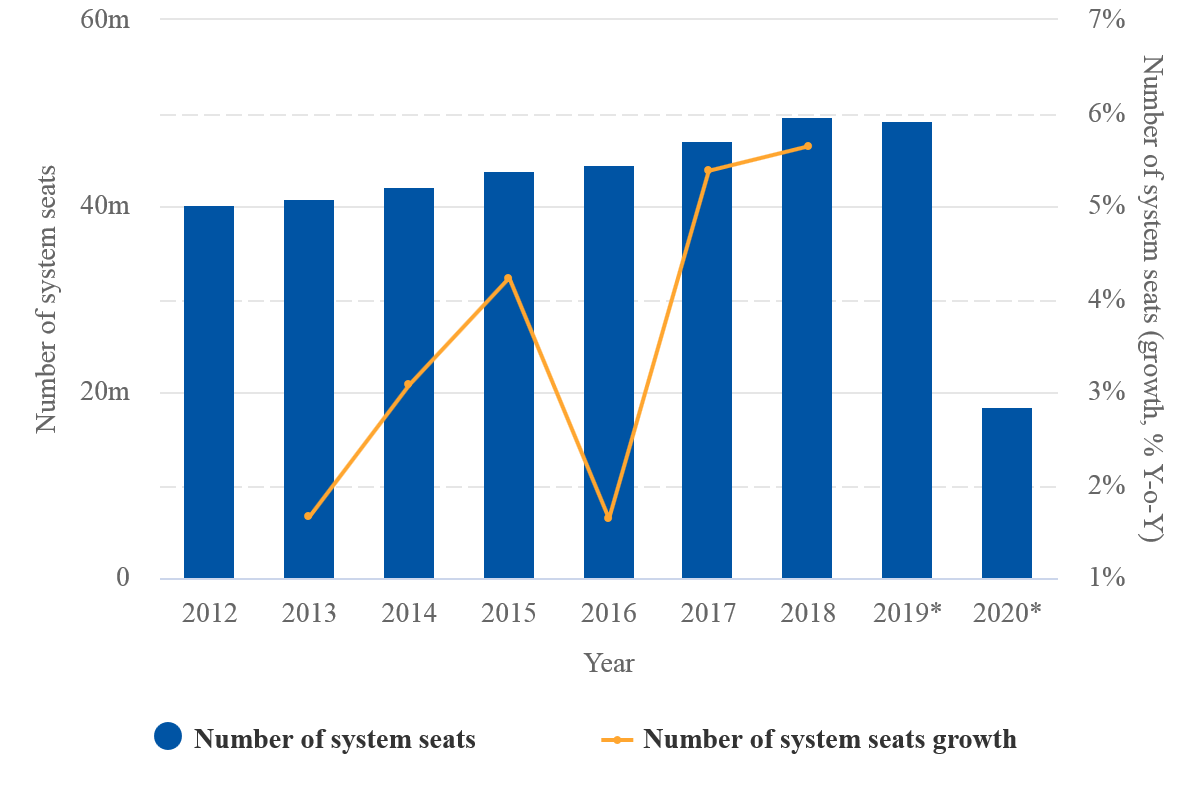 Capacity reductions are expected to continue into 2020. In a memo to staff sent in late Nov-2019, Cathay said that its position had “deteriorated” in recent weeks and forward bookings for next year [2020] are much lower than we would hope for.”

In response, the airline is planning more capacity cuts and is forecasting a reduction of 1.4% year-on-year for 2020. This is quite a departure from the airline’s original plan of 3.1% growth for that year. Cathay has stressed that it does not intend to axe any routes completely, although there will be frequency reductions across all regions.

In parallel with the capacity cuts, Cathay has also taken steps to slow down its fleet growth in 2020. The airline will reduce its planned expansion by six aircraft – comprising four delivery deferrals and two early retirements. The deferred aircraft were earmarked for Cathay Dragon and Hong Kong Express subsidiaries. Overall, the group will add 17 aircraft and retire 10 in 2020.

For Cathay Pacific some offset of its end-to-end traffic flows has been possible, as its transfer traffic has grown in high single digit levels – albeit with a pricing penalty.

For Hong Kong Airlines there is no such comfort – modest comfort though it may be. The protests have exacerbated what was already a very shaky outlook. The airline has stated that it has been under pressure from higher competition and excess supply in its markets for some time, and Hong Kong’s current troubles have hurt demand and revenue further.

Hong Kong Airlines had made significant reductions before the protests, and progressively deeper capacity cuts have been imposed by the airline in recent months. On 4-Nov-2019 it announced that it would slice its operations by 6%, including the suspension of its Los Angeles route and reducing frequencies on others.

Then, on 29-Nov-2019, further weakening demand caused the airline to review its business again and make more cuts. The airline said that it would terminate its Vancouver route from February, ending its North American service. Flights to Ho Chi Minh City and Tianjin will also be suspended in February.

Data from CAPA and OAG shows that Hong Kong Airlines’ seat capacity was lower by 18.4% year-on-year for the week of 2-Dec-2019. This more than offset the growth achieved over the past three years, with capacity dropping below where it was at the same point in 2016. 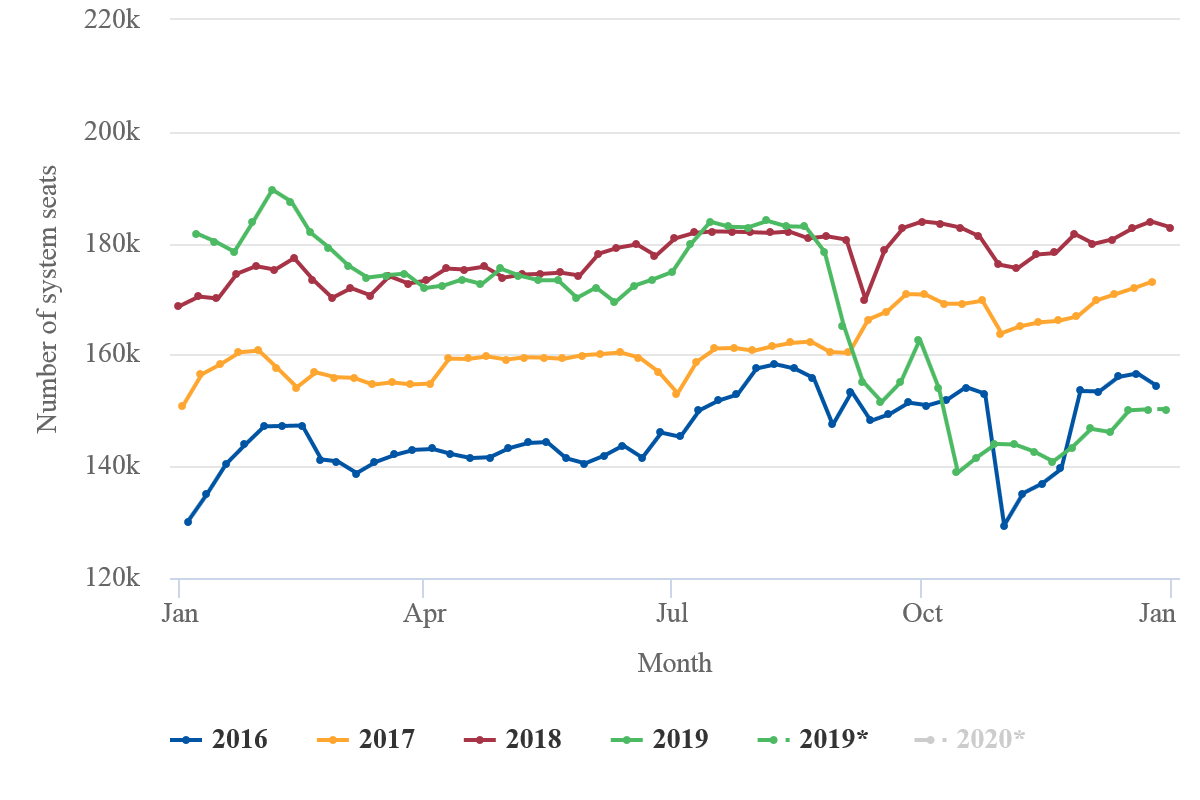 Hong Kong Airlines has been grappling with a liquidity crunch that has threatened its existence.

Hong Kong aviation regulators had repeatedly expressed concern about the airline’s viability and have been closely watching its financial condition. Senior government officials summoned Hong Kong Airlines executives on 27-Nov-2019 to stress that urgent action was required to improve the airline’s finances.

On 2-Dec-2019 the Air Transport Licensing Authority (ATLA) warned the airline that it must find new funds and maintain a designated cash level. The ATLA said it would take further action if these steps were not taken by 7-Dec-2019, with one option being the suspension of the airline’s licence.

The airline reports that it has now met the ATLA requirements through the introduction of “a cash injection plan following urgent consultation with our stakeholders”, and that funding was to be "introduced in phases". Hong Kong Airlines is controlled by China’s HNA Group. While it has staved off this deadline, the current environment will not make things any easier.

With Hong Kong's resilience, airlines will hope for healthy demand rebound in 2020

Although the timing is uncertain, it would not be unreasonable for airlines to assume that inbound demand will start to recover sometime in 2020.

The Hong Kong market has shown the ability to bounce back reasonably well from previous external shocks, such as the 2003 scare from SARS (when Cathay Pacific went to the brink of ceasing service completely) and the avian flu scare. Demand should begin to return to previous levels if the protests – or at least headline-grabbing violent incidents – subside. Traffic from mainland China could take longer to recover, however.

In a familiar refrain for this industry, the airlines can do little to influence the external events affecting their traffic. However, they can control their response.

Cathay is taking a sensible course by trimming capacity plans for 2020. If demand does come back, it can readjust; although it has scaled down its 2020 fleet growth, there are other ways it can ramp up capacity if necessary. Cathay’s new management will also be acutely aware of the need to keep the airline on track to profitability.

For Hong Kong Airlines the equation is a little different. Even if demand does recover, the airline will likely take a conservative approach to its capacity as it looks to rebuild confidence in its financial health among suppliers, regulators and passengers.