Its initial network will comprise mainland Chinese as well as Northeast and Southeast Asian destinations, a medley of new cities, previously served ones and actively served ones. Competition will range from light to heavy as it faces formidable full-service and low-cost carriers. Hong Kong Express plans to fly 1.5 million passengers in its first year and have a fleet of 30 A320s by 2018.

Hong Kong Express is clearly not an AirAsia or Jetstar. Its ancillary offering is light and other structural differences, like IT, will make it less robust. This is partially to be expected as it does not have an experienced LCC group to piggyback on, but its launch has hints of being under-whelming compared to what Peach or Scoot achieved.

Osaka Kansai launches 21-Nov-2013 and Tokyo Haneda on 07-Nov-2013. Hong Kong Express has loaded a Penang service in the GDS but has not yet publicly announced this destination.

Source: CAPA - Centre for Aviation, airlines and Innovata
Note: Hong Kong Express' website has not formally set a launch date for Penang. Osaka and Tokyo do not launch until Nov-2013.

All routes will see competition with the Cathay Pacific Group, including Cathay and wholly-owned regional subsidiary Dragonair. Only three routes (Kota Kinabalu, Osaka Kansai and Phuket) have an existing LCC operator. In all markets Hong Kong Express will, initially at least, have a minority of capacity. Cathay has already responded to Hong Kong Express by boosting capacity to Chiang Mai. 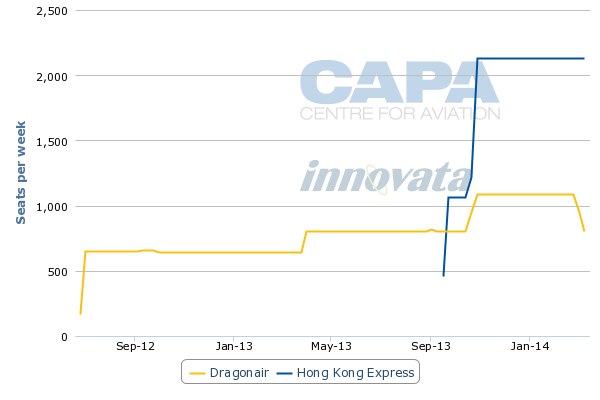 As part of the change to being a LCC, Hong Kong Express will transfer some current routes to Hong Kong Airlines to be served under the full-service banner.

Osaka and Tokyo added back to the group but mainland China de-emphasised, for now at least

This network slightly differs from that stated by Hong Kong Express in Jun-2013 when announcing it was adopting the LCC model. At the time it emphasised mainland China destinations, including Chongqing, but has removed that to focus on Northeast and Southeast Asian destinations. Chongqing also sees very limited leisure traffic from Hong Kong. Hong Kong Express' initial focus remains on point-to-point routes.

Peach is ramping up Osaka-Hong Kong to a double daily service while Tokyo-Hong Kong is likely a contender once Jetstar Japan commences international operations in mid/late 2014. Or Jetstar Hong Kong could serve the route in lieu of Jetstar Japan. A few of the Hong Kong Express management consultants worked on the Peach launch and so would be familiar with the un-tapped potential of the Japan-Hong Kong market, where yields run high.

Hong Kong Express in Sep-2013 announced its first sale as a LCC. There were no USD0 fares or other almost-zero fares as might be found at other LCCs. But this is partially the result of Hong Kong being captive to high fares, so only a smaller discount is needed to generate buzz and bookings. The fares offered were still low by any standards. Fares, as to be expected, were partially based on distance (Japan was more expensive than Thailand) but also demand as competitive Kota Kinabalu was priced lower than Chiang Mai (with only one other operator) despite Chiang Mai being closer to Hong Kong than Kota Kinabalu.

Hong Kong Express maintains a lead over publicly available fares. Even when Dragonair released very limited super "fanfare" tickets to Chiang Mai, they were USD153, USD15 more than Hong Kong Express, albeit with catering and luggage but on limited dates and in limited quantity. This indicates Hong Kong Express will be able to retain pricing traction on public fares, but in Hong Kong most fares are sold through consolidators, with whom Cathay has a strong relationship. This can either see Cathay release cheap fares to Hong Kong Express destinations or pressure partners not to sell Hong Kong Express tickets. Web distribution in Hong Kong is low despite the prevalence of mobile devices and some of the world's fastest internet speeds.

Hong Kong Express is being brave, entering the big boy territory filled with the likes of Cathay Pacific and AirAsia despite Hong Kong Express having a weak offering initially. While Hong Kong Express' A320 aircraft will be more dense with 174 seats (albeit more than Dragonair), this is less than the 180 maximum used by AirAsia and Peach, amongst others. Hong Kong Express' website in Sep-2013 sells checked luggage as its sole ancillary revenue stream. There is not yet an option to pre-purchase meals, seat assignments, in-flight entertainment, miscellaneous goods or even partner plug-ins to purchase activities, hotels and car rentals. And so far checked luggage seems to be a flat rate rather than dynamically priced based on distance and other factors, although this is still somewhat new to some airlines.

Weakness is partially to be expected as Hong Kong Express is a new LCC encumbered by having to switch over systems rather than start from scratch. But looking at some of the recently launched LCCs unaffiliated with a LCC parent offers a contrast. Peach and Scoot offered greater services from their first day of sales than Hong Kong Express. A new AirAsia or Jetstar subsidiary from day one could tap into the parent's experience, product and infrastructure to offer a much more robust proposition from the start.

And as an AirAsia or Jetstar-affiliated LCC grew, it would likely have the entrepreneurial mindset to come up with new ancillary streams and other tactics to boost the business. Both Peach and Scoot have also demonstrated this. Scoot as well as AirAsia and Jetstar affiliates are helped by their selection of Navitaire, used by many of the world's LCCs. While Hong Kong Express could look to have a better IT infrastructure, this would require a cutover and additional time.

Hong Kong Express has some measure to go to prove it has shaken its legacy HNA Group heritage and can be a robust player. There is much potential for Hong Kong Express and it is early days, but so far the result is underwhelming.

Hong Kong Express does plan to eventually offer a transfer service with Hong Kong Airlines, other HNA Group carriers and non-HNA airlines (no timeframe is given). But HK Airlines-HK Express transfers will likely represent significant amounts of traffic and be confusing to passengers as one flight will be full-service and another low-cost despite the flight times being similar and airline names almost identical. (Hong Kong Express has mooted it could re-brand later.)

Without higher-yielding traffic, Hong Kong Airlines will depend on the leisure, very price-sensitive segment that Hong Kong Express will better capture. That will result in Hong Kong Express succeeding partially at the expense of Hong Kong Airlines rather than the two having their main target segment albeit with some overlap. History has not been kind to LCC off-shoots that have cannibalised the full-service parent's traffic: Delta folded Delta Express and Song; British Airways broke off from Go; and United folded Shuttle by United as well as Ted, to name a few examples. The risk is Hong Kong Express becoming divisive within the group rather than as an effective tool to make the group more competitive.

Hong Kong Airlines would still need to move its brand up-market, raising the question if it is more pragmatic to take costs out of the business or invest heavily to move up-market in a competitive space. The real question, however, may be if Hong Kong Airlines and its owners are willing to shed their ambition to be full-service and instead follow what will make them sustainable and allow for growth. Hong Kong Airlines is not alone in Asia in facing this question. Indeed, heavyweights in Europe with fleets much larger and histories much longer are still coming to terms with this. Low-cost may not be sexy, but there is no pride in losing money. And Hong Kong Airlines is not known for posting profits.

In the short term, a dual brand strategy will likely be very complex for Hong Kong Airlines to manage and succeed at. Any success will come with notable confusion from passengers. In the long-term, a dual-brand strategy will still have to prove itself, especially as the full-service short-haul concept loses favour. Asia's growth is young and there are opportunities for an airline to find a new permutation that works, but the bet is not on Hong Kong Airlines being the one to pull the rabbit out of the magician's hat. There is no need to impress when there are already suitable examples out there and aviation is complex enough.

An intriguing scenario is converting the entire group to a highly hybrid carrier that can carry the group's limited premium passengers as well as economy passengers. AirAsia X, Cebu Pacific and Scoot are showing success with regional operations on highly dense widebodies (parts of Scoot's network are profitable). Aircraft re-configurations do cost considerable sums, and the challenge is as much the money as the fact that the outcome – low-cost service – may not be liked even if it is backed by business analysis. But again, human capital will be wanting. Few have succeeded with a hybrid operation.