Administration has been in the wind for China’s HNA Group for a long time, and especially so since 2017, which coincidentally was the peak of its interest in airport deals.

On 29-Jan-2021 China’s HNA Group – a huge multi-industry enterprise covering air transportation, airport management, hotels, logistics, real estate, retail, tourism and other related industries – applied for bankruptcy and reorganisation, after a long period of financial struggle and amid allegations of embezzlement. Creditors applied to the courts for bankruptcy proceedings because the group could not pay off due debts.

HNA is better known for its airline portfolio than for its airports, which in China are mainly smaller regional ones, and which outside China amount to just one.

Things could have been a lot different though as the Group tries to tap into China's Belt and Road initiative.

HNA’s bankruptcy was coming for 10 years

On 29-Jan-2021 China’s HNA Group – a huge multi-industry enterprise covering air transportation, airport management, hotels, logistics, real estate, retail, tourism and other related industries – applied for bankruptcy and reorganisation, after a long period of financial struggle and amid allegations of embezzlement. Creditors applied to the courts for bankruptcy proceedings because the group could not pay off due debts.

It was hardly unexpected. As long ago as 2011 the group was denying reports that it was operating at significant losses due to its recent mergers and acquisitions.

In Feb-2020 Chinese authorities had already stepped in to run one of the largest conglomerates in China, as it struggled to overcome a debt crisis made worse by the emergence of COVID-19. The latest financial report that the company had published, covering 1H2019, showed that it had RNB706.7 billion (USD109 billion) of debt.

HNA once attracted global attention for its aggressive spending, including a stake in Hilton Worldwide Holding and Deutsche Bank. It was noted for its highly complex ownership and risk-sharing structures.

The group became indebted after liquidity issues emerged in 2017.

HNA Group is the second largest shareholder in Hainan Airlines, one of close to 20 airlines it holds a stake in within China and abroad, and it retained a fleet of 900 aircraft.

It is the airline part of the business that is attracting most attention.

There is speculation that Hainan Airlines, China’s fourth largest, could attract new investors, as its operations are stable at this time. All HNA Group subsidiaries will spend this year negotiating to bring in strategic investors, according to media reports.

…and domestically the airport portfolio is impressive, but not internationally

But where does this leave HNA’s airport portfolio, almost all of it within China itself, and what impact will it have on its foreign airport ownership ambitions?

It would be fair to say that the company’s ambitions in the foreign airport sector were once very high, but also that they were scaled back dramatically from 2017, when its financial situation began to deteriorate.

Having once chased around the world looking for deals, it now has only one investment: namely part-ownership of Frankfurt Hahn, the secondary level LCC and cargo-oriented German airport.

That is enough to register HNA as a ‘Major Global Investor’ in the CAPA Global Airport Investors Directory.

Haikou Hainan Meilan and Sanya Phoenix are its domestic jewels

In China, the two most significant airports are Haikou Hainan Meilan, the gateway to Hainan Island, and Sanya Phoenix, both in the south of the country and both serving tourist areas.

Haikou Meilan is one of few airports in China to have been the subject of foreign investment.

Copenhagen Airports held 20% of the equity before selling it to Oriental Patron (Hong Kong). Copenhagen Airports is one of several early investors into China that found a minority holding to be valueless in terms of strategic direction. They included Aéroports de Paris and VINCI Airports, which also exited China, although Fraport remains a minority shareholder at Xi’An Airport.

As for the likelihood of foreign investors returning to China to invest in either of the Haikou and Sanya airports (HNA’s other 14 in China are regional ones), the potential for that remains very slight.

In the preface to the Airport Privatisation and Finance Review (Sep-2018) it was stated “while China is home to several global-scale external investors (of which HNA was singled out)[,] it remains largely unwelcoming to inward foreign investment into its own airports.”

There has been no change since then and there is not likely to be, following political unrest in Hong Kong, international condemnation of treatment of the 11 million Uighurs who live in Xinjiang, COVID-19, and now the military coup in Myanmar, which has ramifications for the whole of Asia.

If foreign airport investors are actually on the hunt for bargains just now, there are safer places in the world to put their own and their clients’ money.

HNA’s only foreign airport investment – for Hahn Airport there have been big passenger losses, but cargo gains

As for what will become of the foreign investments, there is only the one – Frankfurt Hahn, where HNA Group, along with Germany’s ADC GmbH, purchased the Rhineland-Palatinate state's 82.5% stake in Frankfurt Hahn Airport for USD15.8 million in Aug-2017, although the Hesse state opted to retain its 17.5% holding.

HNA Group indicated that in the first few years of taking over operations it would invest EUR50 million at Hahn Airport, which has been losing both passenger traffic and cargo volume.  HNA viewed the airport as one that could become a leading hub of commerce between China and Europe, in support of China's 'One Belt One Road' initiative.

It is possible that what emerges of HNA out of the administration could relieve itself of its share in an airport that can still play a part in that initiative; but passenger traffic there has been falling consistently year-on-year since 2016, reducing from a 10-year high of 3.5 million (2010) to just 1.5 million in 2019.

And that was before COVID took its toll. 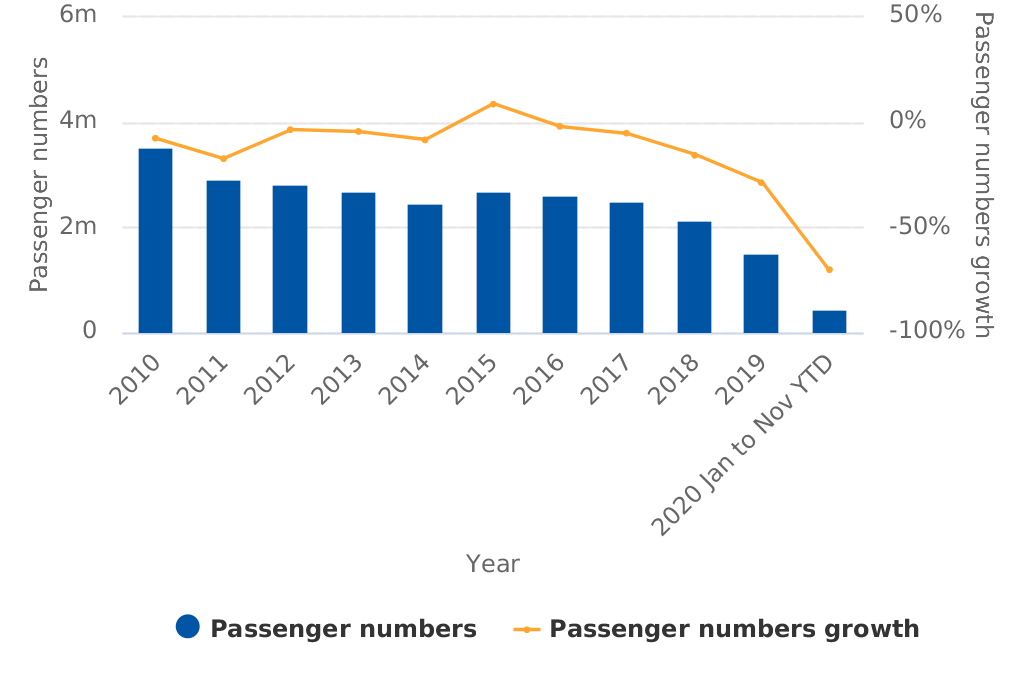 On the other hand, cargo capacity has grown consistently since 2017, even in 2020 in common with many other airports as e-commerce and the carriage of medical supplies increased dramatically. That is more in keeping with the Belt and Road initiative than is passenger numbers. 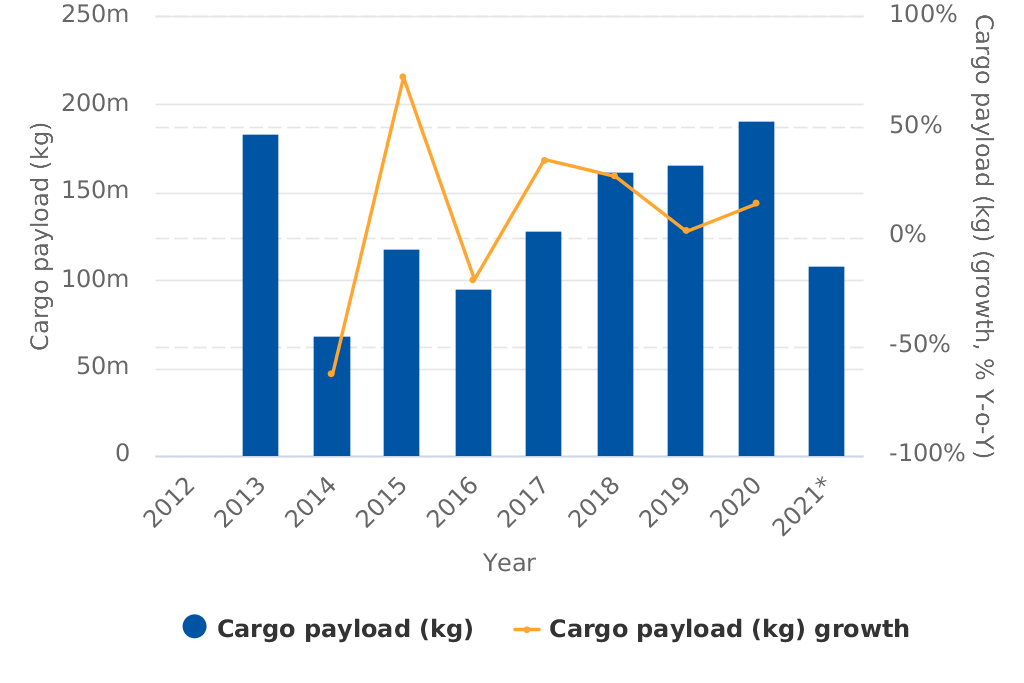 The other airport in Europe in which HNA almost became an investor and operator is Plovdiv Airport, which serves Bulgaria’s second city. Once again, cargo potential and relationship to the Belt and Road initiative was the driving force.

In Mar-2018 Bulgaria awarded HNA Airport Group a 35-year concession to operate Plovdiv Krumovo International Airport, during which HNA was obliged to make investments amounting to EUR79 million, including a new cargo and passenger terminal and an MRO facility.

But by October of 2018 the concession was cancelled after HNA, which by then was becoming increasingly embroiled in its own financial crisis, lost interest and withdrew its offer. The concessionaire would have made a fixed fee of BGN600,000 (then EUR306,775) per annum, and a variable fee of 6% of total net income from all concession activities. That would have bought it an enviable location for cargo activities in Central and Eastern Europe.

With regard to other potential investments in Europe, they began as long ago as more than a decade, when HNA bid unsuccessfully for 27.6% of Brussels South Charleroi Airport in Belgium (eventually won [20.68%] by Italy’s S.A.V.E.).

Around that time HNA Group was rumoured to be scouring Europe for airport assets as part of its ambition of building a world-class enterprise and being a world-famous brand. HNA’s website stated that it would “cooperate with all the outstanding enterprises and people of insights all around the world for a bright future”.

The successful bidder on that occasion was VINCI Airports and passenger traffic continued to increase strongly through to 2019, although cargo volume (at least as desirable for HNA) did not, actually decreasing by 6% in 2019.

Looking at maps of Europe and comparing them to the Belt and Road Initiative – it is plain to see how these airports (Frankfurt Hahn, Plovdiv and Belgrade) would fit into the jigsaw.