Hawaiian Airlines' shares plummeted in trading yesterday, due to its exposure to the Japanese market. The carrier's CEO and President Mark Dunkerley noted cancellations have been “pretty modest” and the carrier has declared its intention to continue its Japan schedule and expansion plans.

Hawaiian Governor Neil Abercrombie has predicted the economic consequences will be severe for Hawaii. “It’s going to be terrible. It’s going to be rough. It’s something that we have to come to grips with," he said. Hawaii is the top US destination for Japanese travellers, with more than 1.2 million visitors from Japan in 2010 contributing USD1.9 billion or 17% of the economy;

FedEx shares gained 3% as it unveiled its financial highlights for the three months ended 28-Feb-2011. FedEx stated, "Earnings could be affected by the impact of the ongoing political turmoil in the Middle East and North Africa on fuel prices and the economy. Also, the near-term impact of the earthquake and tsunami in Japan on operational costs, shipping patterns and the global economy is currently uncertain". 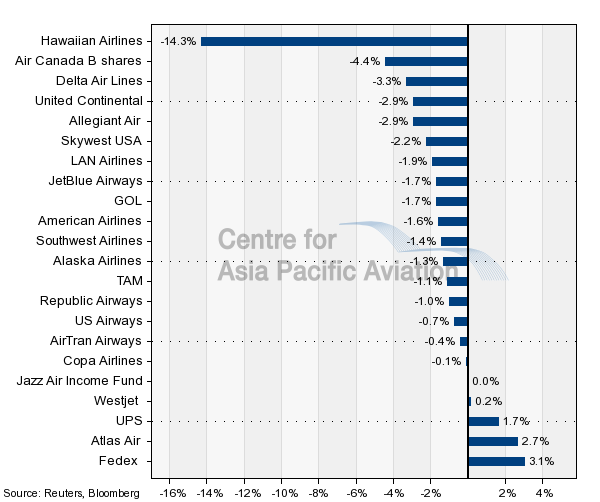