The majority of North and South American carriers made gains despite a very modest rise in the wider US market on Friday (05-Feb-2010), with the Dow ending trading up 0.1%, following mixed US jobs data. It was announced during trading that the US unemployment rate unexpectedly fell to 9.7% for Dec-2009. However, job losses for the month also increased.

Airline stocks were boosted by strong traffic and financial results from Hawaiian the day prior, as well as a 2.7% drop in oil prices, to USD71.19. The AMEX Airline Index ended trading up 2.1%.

Hawaiian Airlines (+15.5%) soared as investors digested its net profit of USD35.0 million for 4Q2010, compared to a loss of USD11.9 million in the previous corresponding period. Jesup & Lamont stated they are maintaining a ‘Buy’ rating for the carrier’s shares.

Japanese newspaper, Asahi Shimbun, reported Japan Airlines will maintain its partnership with American Airlines (+5.5%) and the oneworld alliance and end talks with Delta Air Lines (-1.4%) and the SkyTeam alliance. The carrier reportedly believes an alliance switch is too risky, and could hinder its ability to turn around the airline quickly.

An official announcement is reportedly expected this week or next. Delta, meanwhile told Bloomberg it "continues to be in discussion" with JAL and that it "is confident" a partnership "would provide the greatest opportunity for JAL to increase annual revenues over the long-term". Meanwhile, American Airlines stated it is "inappropriate'' to comment on any alliance plans by JAL prior to an official announcement.

President elect sells some of stake in LAN

Chile’s Axxion de Pinera, the holding company that controls most of President-elect Sebastian Pinera’s stake in LAN (+2.4%) has reportedly sold a 19.3% stake in the carrier. Mr Pinera still has a 7% stake in the airline.

To continue monitoring the latest on LAN, and other carriers, please see America Airline Daily, your one-stop shop for news, data and analysis from the dynamic North American, Caribbean and Latin American aviation markets. 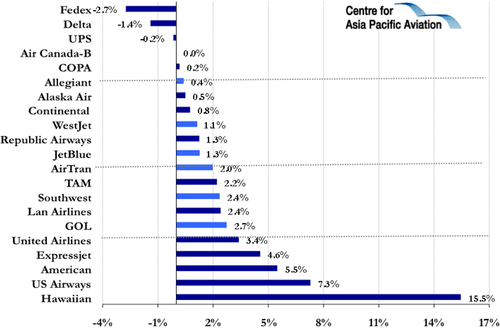