Hawaiian Airlines reported a 4Q2010 profit of USD11.3 million, although the carrier suffered a USD60 million write-off to its bottom line thanks to a one-time tax adjustments. The positive financial result missed analysts expectations, with the carrier’s shares finishing trading on Wednesday 5.4% lower.

Revenue grew 16% in the quarter, to USD344 million, while costs rose 14%, driven by a 27% increase in fuel costs. Hawaiian reported net income of USD45 million, although net income would have been USD110 if non-recurring tax adjustments are excluded.

Most other North American carriers traded down, as more concerns about the negative affects of rising fuel prices play on the market. IATA cautioned that increasing jet fuel prices could eat away its forecast of USD9.1 billion in industry profits for 2011.

IATA’s forecast is based at an average cost of oil at USD84 per barrel for 2010. However, Brent crude topped USD100 per barrel this week – for the first time in two years – while West Texas Intermediate crude has traded above USD90 per barrel. 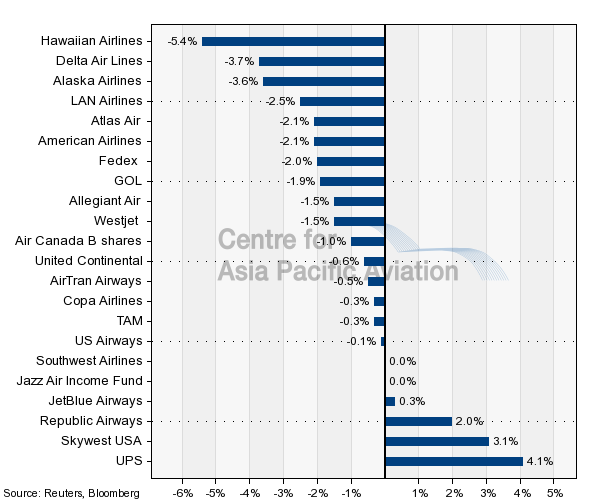