North and South American carriers rose with the wider market on Friday (05-Mar-2010), with the Dow (+1.2%) rising on news US job losses were smaller than expected in Feb-2010, withthe unemployment rate remaining at 9.7%. Furthermore, job losses totalled 36,000 for the month, much lower than the 67,000 expected by analysts.

The airline additionally faces increasing competition from Allegiant, which is acquiring B757 equipment for the purposes of serving Hawaii from late 2010.

Southwest (+0.6%) was also up marginally, after estimating RASM for Feb-2010 rose 16-17%. However, the rise in share price was weakened by news passenger revenue for the month declined by approximately USD15 million as a result of weather-related cancellations and delays. According to MarketWatch, analysts expect the Feb-2010 storms to have affected US carriers’ revenues by over USD100 million.

In other LCC news, JetBlue (-0.2%) slipped after Fitch Ratings affirmed the Issuer Default Rating (IDR) for JetBlue Airways at 'B-' and the senior unsecured rating, which applies to approximately USD470 million of convertible notes, at 'CC' with a Recovery Rating of 'RR6'. The airline's rating outlook has been revised from 'Negative' to 'Stable'.

Copa Airlines (+1.7%) stated during trading that it plans to increase capacity by approximately 10% this year, a sign demand for the carrier is on the mend. During the year, Copa plans to take delivery of eight new B737-800s.

For the lasted on what’s happening in the North and South American airline industry, why not subscribe to America Airline Daily? Other stories featured in today’s issue include: 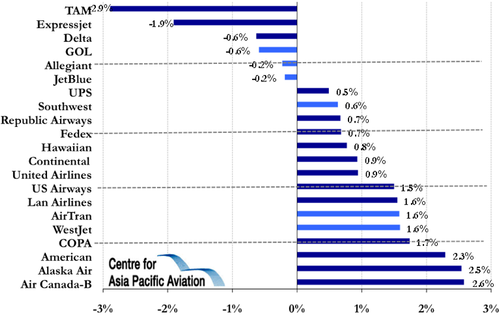