North and South American airline stocks soared again on Wednesday (15-Sep-2010), as US carriers continued to release improved guidance for 3Q2010 during the session. A gain in the Dow (+0.4%) also sent airline shares higher, despite data showing industrial output grew at a slower rate in Aug-2010.

Hawaiian Airlines (+7.9%) soared after holding company, Hawaiian Holdings, released revised guidance for 3Q2010. The carrier expects passenger revenue per ASM (PRASM) to rise 5.5-7.5% year-on-year for the quarter, to approximately USD 10.74 cents. This is up from its previous forecast of a 4.5-7.5% gain.

Traffic wise passenger traffic is expected to increase 3.2-4.2% on a 2.5% rise in capacity.

Continental Airlines (-0.1%) and United Airlines (-0.3%) also slipped ahead of its shareholder vote on Friday 17-Sep-2010 on the USD3.2 billion merger between the airlines. Stockholder meetings will be held in Continental’s Houston headquarters and United’s Chicago headquarters, with votes to be release shortly after the meetings on Friday. Meetings have been held in Denver between the airlines’ managements and Air Line Pilots Association. Union representatives from both airlines have previously stated that they consider the merger to be in the best interests of the two airlines. 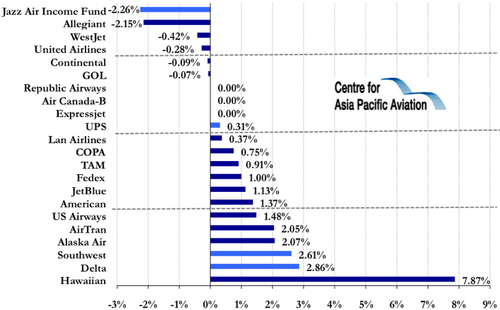