Hawaiian Airlines’ unique geography continues to benefit the company in 2016 as favourable capacity trends are one factor in its industry outperformance in unit revenue metrics. Hawaiian’s outlook for the remainder of 2016 remains positive as industry capacity on its routes to North America and long haul destinations remains relatively benign.

The airline is acknowledging slight pressure in its inter-island operations due to heightened competition with the smaller operator Island Air. Hawaiian plans to adjust its inter-island schedule later in 2016 to maximise peak flying and cut some off-peak flights.

Hawaiian is expanding service to the Tokyo market in 2016 after being awarded new slots at Haneda airport. But the expansion is not affecting Hawaiian’s overall growth targets of a 2.5% to 5.5% increase in capacity, which is significantly lower than the double-digit expansion it recorded from 2011 to 2013.

As most US airlines have struggled with unit revenue declines that (in some cases) reached the high single digits in 1H2016, Hawaiian has been the industry outperformer. On a system basis its revenue per available seat mile (RASM) grew 1.6% year-on-year in 2Q2016 and 0.2% in 1H2016.

The lack of pricing traction on the US mainland has not affected Hawaiian so adversely, given that industry capacity actions on the airline’s mainline routes have been rational. With the exception of JFK, Hawaiian’s largest routes to the mainland measured by ASMs are centred in the western part of the US, or on the US west coast. 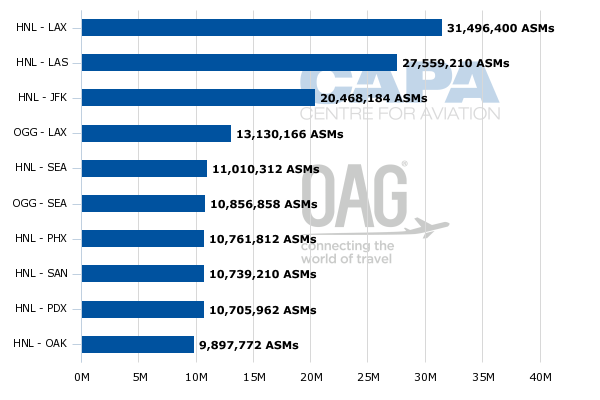 Company executives recently explained that industry capacity on its mainland routes was flat year-on-year in 2Q2016 compared with a 10% increase the year prior, which pressured Hawaiian’s unit revenues. The company’s unit revenues in 2Q2015 fell 4.8% year-on-year.

Hawaiian projects that industry capacity on its US mainland routes should grow 2% in 3Q2016, which includes the high summer demand period, and remain flat during 4Q2016. Noting stable levels of demand, Hawaiian has concluded that its PRASM performance on mainland routes should continue to improve, albeit at a moderate pace now that the airline has lapped the most challenging quarters of the year-earlier period.

The airline has calculated that F/X and fuel surcharge headwinds represented approximately 2ppt of the 2Q2016 PRASM decline in international markets.

Hawaiian believes that industry seats on its long haul routes will rise 1% for 2H2016. The airline did not include capacity from the US mainland to Australia and New Zealand. Both American and United have launched service in those markets during the last year. American added service from Los Angeles to Sydney in late 2015, and in 2016 has introduced flights from Los Angeles to Auckland. United has also added new flights from its San Francisco hub to Auckland in 2016.

Data from CAPA and OAG for the week of 1-Aug-2017 show that seats from the US to New Zealand are up 32% year-on-year.

Seats between the US and Australia have grown 8% year-on-year.

Even though Hawaiian does not operate services from the mainland to Australia and New Zealand, it does carry some connecting traffic between the US and Oceania, the company has explained. The promotional fares associated with the new capacity from the mainland to the region “provide a degree of destination competition for leisure travel from the region”, Hawaiian has said.

Hawaiian’s new long haul destinations in 2016 include new daily flights from Kona to Haneda and Haneda to Honolulu, after the airline was granted a night-time slot at Haneda airport. More recently, Hawaiian tentatively won the right to shift its Honolulu-Haneda service to a coveted daytime slot.

In 2016 the airline is taking delivery of a single Airbus A330 widebody and one A320, according to the CAPA Fleet database. Previously Hawaiian has stated that it would fund the growth for the night-time Haneda slot from elsewhere in its network. 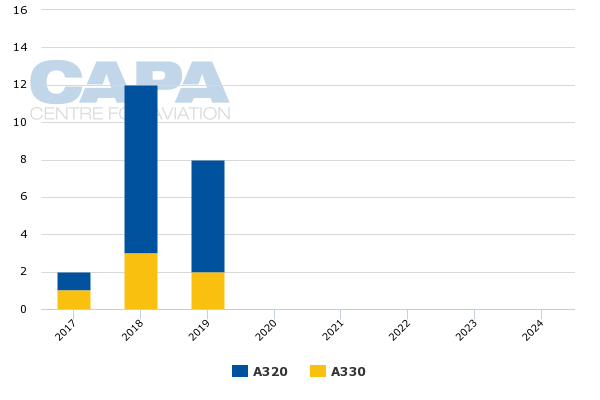 Aircraft operated by subsidiaries/associates of the main airline may be listed separately.
Firm orders include those placed directly by the operator and by lessors assigned to the operator, from 1-Aug-2016 onwards.
Excludes aircraft for which the delivery date has not been announced, cannot be reasonably projected or is unlikely to be delivered.

Hawaiian has explained that year-on-year PRASM in its neighbouring island network had been slightly lower year-on-year since its competitor Island Air added capacity on service from Honolulu to Lihue and Kona. The Honolulu-Lihue route is a resumption of service for Island Air after it exited the pairing in Jun-2015.

Data from CAPA and OAG for the week of 1-Aug-2016 show that both Hawaiian and Island Air have increased their flights between Honolulu and Lihue year-on-year. Total seats have grown 27%. 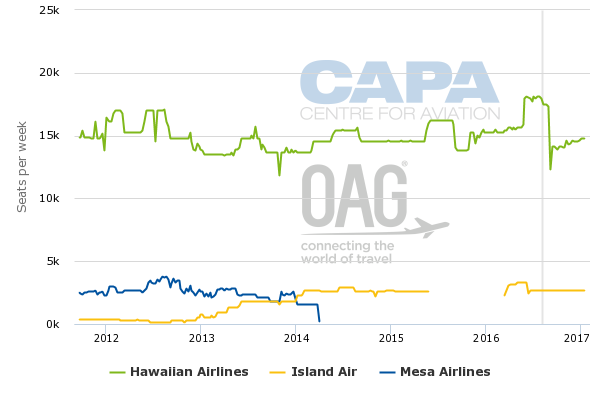 Hawaiian’s seats from Honolulu to Kona have fallen about 4% year-on-year as Island Air has entered the market. 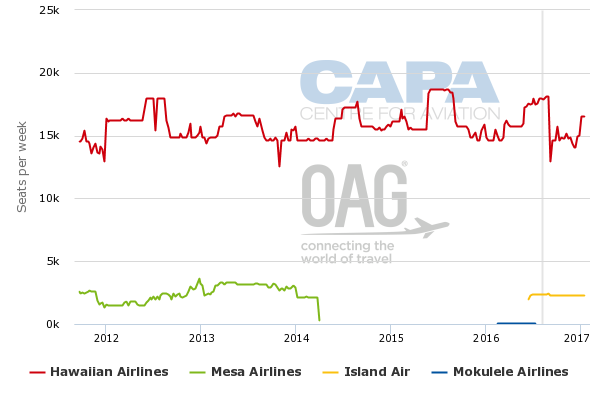 Despite the increased competitive pressure, Hawaiian has touted its 90% seat share in the inter-island markets, and the breadth of its schedule. Island Air is a small operator with a fleet of five ATR 72 turboprops, but its expansion into key inter-island routes has created some headwinds for Hawaiian.

Next year Hawaiian plans to add two additional Boeing 717s previously operated by Volotea to its inter-island operation for a total of 20 aircraft. Hawaiian has assured that the additional 717s are not proportionally increasing capacity on those routes; rather, their function is to allow Hawaiian to flex its schedule up on peak midday connections and higher-demand days, while offsetting reductions outside the peak.

Source: CAPA Fleet Database
Orders include those placed directly by the operator and by lessors assigned to the operator, from 4-Aug-2016 onwards.

Hawaiian’s 717s have an average age of 15 years, and the two additional jets coming online in early 2017 also give Hawaiian flexibility in its 717 maintenance programme. 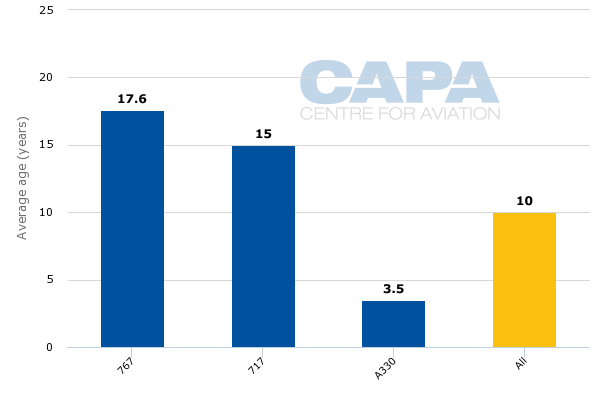 Hawaiian Airlines should enjoy its insulation from negative US marketplace dynamics

The outlook offered by Hawaiian for the remainder of 2016 is by far among the best among North American airlines. Its rational capacity behaviour, coupled with favourable industry capacity actions in some of its most important markets, mean Hawaiian should become a unit revenue star in 2016. Although its unit revenue is forecast to dip 1% to 2% in 3Q2016, it stands a chance of attaining a positive performance in that metric for the year.

Hawaiian’s insulation from negative competitive dynamics on the US mainland will not last indefinitely. But for now the airline has earned the right to boast about its favourable revenue performance vis-à-vis its North American airline peers.