With the Bahrain Government clearing the way for a major bail out for Gulf Air earlier this year, the carrier has made another major strategic move, with a long-overdue adjustment to its fleet orders. After extensive discussions with both Airbus and Boeing, Gulf Air is shelving the majority of its orders for widebody aircraft, in favour of larger numbers of current and future generation narrowbodies.

The widebody orders were a legacy of Gulf Air’s ambition to re-establish itself as a major player in the Middle East long-haul market. As part of this goal, it ordered 20 A330s and 24 Boeing 787s in a series of agreements made over 2008 and 2009. The objective was to develop the carrier into an entity that could compete in a market that was rapidly being dominated by the expansion of the ‘Big Three’ in the Gulf: Etihad Airways, Qatar Airways and Emirates.

However, things have not turned out as envisioned. After a succession of turn around programmes and three different CEOs in less than five years, a combination of continued heavy losses, the high cost of oil and the broader Middle East socio-political environment has forced a major re-think at the airline. In the face of the new commercial and competitive reality in Gulf aviation, as well as the carrier’s dire financial status, Gulf Air has been forced to turn away from its bid to take a place among the major long-haul carriers of the region.

The carrier’s order with Airbus for 20 A330s has now been replaced by an order for eight A320ceo (current engine option) aircraft, as Airbus refers to the in-production A320, and up to 16 A320neo aircraft. According to Gulf Air, all eight A320ceo aircraft will be delivered before the end of the year. The move will provide a major injection of capacity for the carrier’s short/medium-haul operations. The carrier also has two A320s and three A321s from an existing order that are still to be delivered.

The A320neo aircraft will be used for aircraft replacement and/or growth. Reportedly, only 10 of the aircraft are on firm order. The A320neo is promised to be up to 15% more efficient than the in-service fleet. The aircraft is projected to enter service in Oct-2015 and Airbus already has more than 1,450 firm orders. Given this extensive backlog, it could be several years beyond this before production slots are available to Gulf Air. The carrier said the aircraft will be delivered “towards the end of the decade”.

The 787 order with Boeing has been cut to between 12 and 16 aircraft, with the final number depending on the carrier’s “strategic requirements”. Reports that the carrier had cancelled eight of its 787s emerged in early 2011, but at the time neither Gulf Air nor Boeing would comment on the speculation.

Delivery of the 787s will also be “towards the end of the decade”. The aircraft will likely be used to replace the in-service fleet of A330s. Boeing has been working steadily to increase the production of 787s to 10 aircraft per month by the end of 2013. The US aircraft manufacturer increased output to five aircraft per month in early Nov-2012. It is also working to clear a backlog of fixes to the rear fuselages of around 30 787s that have already been produced.

The discussions with Airbus and Boeing have allowed the carrier to “realign its original orders to meet its long-term strategic needs” according to CEO Samer Majali. He also stated that the revised orders reduce Gulf Air’s long-term financial liability of approximately USD5 billion by over 50%. The remaining orders “more effectively meets Gulf Air’s future fleet replacement and/or growth requirement.”

Getting rid of the widebody order signals a major readjustment to the carrier’s medium-term development strategy. Such a change has been alluded to earlier in the year, when it was revealed that the carrier would likely be shelving most of its long-haul services and much of its fleet and workforce, in exchange for a bail-out by the Bahrain Government.

A BDH185 million (USD491 million) financial aid package cleared the Bahraini Parliament earlier this year, less than a third of the size of the bail-out the carrier had been seeking to carry out its long-term plans. When the reduced bail-out was announced, the Bahraini parliamentarians announced that money would be accompanied by a series of moves designed to stop the heavy losses at the airline. According to the parliament financial and economic affairs committee vice-chairman Abdulhakeem Al Shemri, Gulf Air has cost Bahrain BHD1 billion (USD2.65 billion) over the past four years.

See related article: Bahrain to continue to back Gulf Air but carrier may emerge radically changed

Gulf Air announced that it would take the funds and use them to “implement an accelerated strategy and aggressive restructuring program to achieve more dramatic cost and liability reductions.” According to reports in the Bahraini press, the carrier is looking at phasing out most of the widebody fleet and its older narrowbody aircraft. The airline could possibly cut its fleet to as few as 20 aircraft, although how the new orders figure into this strategy has yet to be made clear.

With the fleet reduction, there would also come major cuts to the workforce, with as many as 1,800 of the 3,900 staff at the carrier expected to be let go. Given the ‘Bahrainisation’ objective at the airline – mandating that 76% of the carrier’s workforce are Bahrain nationals – the majority of the cuts are likely to come from the expatriate workforce.

A major pruning of the carrier’s route network has also been proposed, with up to 18 of its 49 destinations reportedly up for elimination. European routes would be the main casualties, in favour of the Middle Eastern and South Asian marketplaces. The key destinations of Paris, Istanbul and London services will reportedly be retained, but Copenhagen, Frankfurt, Rome and Larnaca all face suspension. Gulf Air has already cut Geneva, Athens and Milan routes in favour of deploying more capacity in the Middle East and Africa. 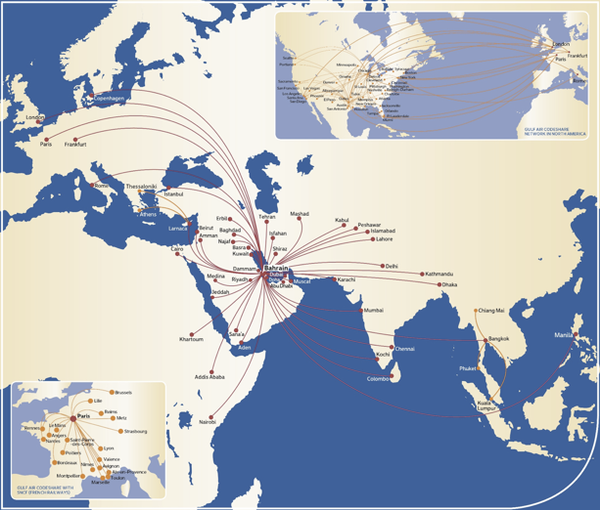 In Southeast Asia, the carrier is reportedly looking at eliminating its Bangkok service and the Manila route may go as well. The carrier’s East African expansion may also be under threat. Gulf Air suspended service to Entebbe earlier in the year after a little over two months of operation and its three other routes in the region – Khartoum, Addis Ababa and Nairobi – could also face cancellation.

The aircraft order cuts and readjustments are a solid sign that Samer Majali is having some impact in his position at the head of Gulf Air. One of the most experienced heads in the airline business, Mr Majali has always recognised he had a major challenge in turning around Gulf Air. Much of that challenge relates to achieving government support for what will now be largely unpopular moves - but ones which are vital if the carrier is to have a future.

The Bahrain flag carrier is now playing to its strengths, hopefully beneath the competitive radar of its competitors

A radical reshuffle of this sort has been long overdue at the airline. Gulf Air needs to play to its strengths, rather than fight a battle against larger and better-funded competition. The ‘Big Three’ of Gulf aviation are sitting on top of an avalanche of growth, most of it suited to long-haul services, and have vastly more extensive international networks than Gulf Air.

The network is a legacy of the time when it was the national carrier for Oman, Abu Dhabi and Qatar as well as Bahrain. In part, the network is also a result of strategic decisions in 2009 and 2010 to reinforce regional operations with smaller aircraft, such as A319 and even short-term leased Embraer e-jets, operating higher frequencies.

Despite the increasing competition from LCCs and other developing smaller carriers, the Middle East regional market is where Gulf Air remains competitive. It offers high frequency operations with convenient connections through the region and its short-haul product is at least comparable to most of its regional peers. Even after being locked out of the lucrative Iranian market, Gulf Air serves 17 regional destinations, including three Iraqi destinations – Al Najaf, Erbil and Baghdad – that it was able to relaunch in the second half of the year.

The order readjustment is just one of a host of changes Gulf Air will need to make if it hopes to emerge from this latest restructure as a sustainable entity. The carrier must conduct a broad cull of its loss making routes, rationalise its operations to cut costs and ensure that it has a product that at least comes close to the regional competition if it hopes to restore profitability.