US airline stocks were up Wednesday in light trading prior to the Thanksgiving holiday. JetBlue’s shares were up 2.5%, with Southwest and AirTran up by 1.8% and 1.0%, respectively.

In the Brazilian market, GOL’s shares gained 0.3%, as Fitch Ratings affirmed GOL's ratings on Foreign and Local Currency long-term Issuer Default Ratings (IDRs) at 'B+' and the Long-term National Rating at 'BBB(bra)'. The rating outlooks have both been revised from ‘Negative’ to ‘Positive’. Fitch also has upgraded the ratings of GOL's perpetual notes (USD200 million) and senior notes (USD200 million) to 'B+/RR4' from 'B/RR5'.

The Brazilian Senate, meanwhile, approved a Bill raising the limit for foreign ownership in Brazilian airlines from 20% to 49%. The bill must still be approved by the Chamber of Deputies, but has the support of the Administration of Brazilian President Luiz Inacio Lula da Silva. 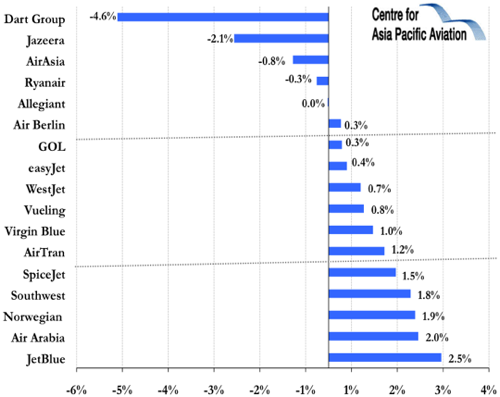 In the Asia Pacific, Qantas (shares down 0.4%) confirmed 25 of its 50 B787s on order would be transferred to Jetstar. Qantas plans to deploy the first delivery of B787-800s on domestic services, replacing its B767 fleet from 2014, while Jetstar plans to utilise its B787-900s to expand into Europe, North America and new North Asian destinations from 2013. The LCC reportedly plans to launch operations to Europe from 2010, after it takes delivery of five A330s, potentially with services to Munich, Milan and possibly Paris.

See related article: Profits at Jet2.com parent company fall, but full year results to be in line with expectations