Shares in European airlines generally gained on Friday (16-Jul-2010), with LCC gains led by easyJet (shares up 1.7%) and Air Berlin (+1.7%). Shares moved higher after Goldman Sachs raised its estimates for the sector in a bullish review and upgraded its rating on easyJet.

Goldman Sachs commented: "We raise our estimates for the airlines as current trading conditions are proving very fertile with business traffic and cargo demand remaining vigorously strong set against easy comps”. The broker added that, on its base case estimates, airline stocks look discounted as a group, trading below mid-cycle valuations such as price-to-book and price-to-peak-earnings against a backdrop of an improving consolidating industry structure.

Goldman Sachs raised its rating for easyJet from "neutral" to "buy”, stating it believes its returns profile warrants a share price around 24% above the current level. The broker added that easyJet's network is the airline's competitive strength, with this expected to strengthen as network carriers reduce their short-haul operations.

Meanwhile, shares in Ryanair gained 0.5% on Friday, the same day the carrier reported it set a new monthly record in Jul-2010, with more than 7 million bookings for Jul-2010 so far.  The carrier added that the bookings represent the “first time any European airline will carry over 7 million passengers in a single month”. 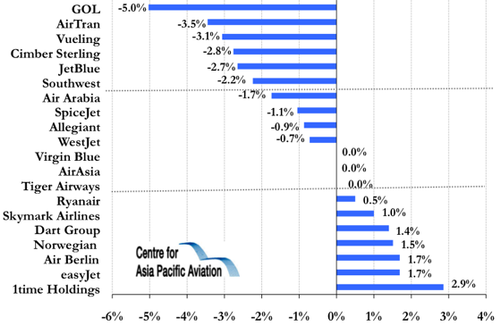