GOL stock downgraded, but anticipates yield improvements in 2010; Spirit Airlines to grow in 2010

GOL’s Chief Executive, Constantino de Oliveira, last week, stated that he does not expect a domestic fare war in 2010, stating airlines are "looking to expand, but they also have responsibilities to their shareholders". He added, "we don't see a repeat of the irrational scenario in the third quarter of last year”.

In other GOL news, Boeing announced that it had prepared a new GOL B737-800 for the manufactuer's first-ever application of a chrome-free primer to a narrowbody aircraft for revenue service.  The carrier, earlier this week, took delivery of its 94th B737NG aircraft.

Spirit Airlines grows with delivery of new A320

In the US market, shares in JetBlue and Allegiant gained 0.7% and 0.4%, respectively, while Southwest’s share price remained unchanged. AirTran’s shares, however, slipped 2.2%.

Among the non-listed US LCCs, Spirit Airlines, which brands itself as an “ultra low cost carrier”, took delivery of the first of four new A320s scheduled for delivery in 2010 this week, with the aircraft commencing regular service on 14-Mar-2010.

The aircraft joins Spirit's existing fleet of 29 aircraft (26 A319s, two A321s and one A320), with an average age of less than four years. The additional A320s mark a more than 11% year-on-year increase in capacity for the upcoming Summer season, enabling the carrier to introduce services to new markets and increase frequency on existing routes. 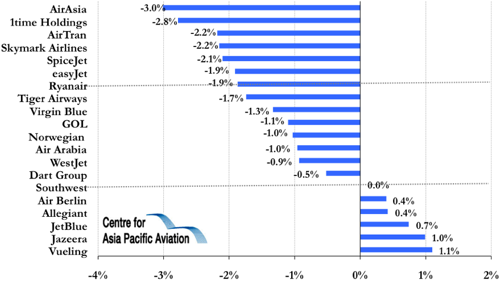