Allegiant shares meanwhile slumped 7.5% on Friday as investors reacted to more analyst downgrades. Jesup & Lamont Inc cut the stock from "buy" to "hold'' last week, saying the stock was over-valued, while Raymond James cut Allegiant from "outperform" to "market perform", citing rising competition to its business strategy of transporting leisure passengers to resort destinations such as Las Vegas and Florida. The carrier reported an 18.5% increase in passenger numbers in March and an overall load factor of 88.9%, up 2.1 percentage points year-on-year.

American Airlines was the biggest mover, rising 6.8% on Friday. The carrier stated passenger numbers fell 10.9% in March. Load factor fell from 83.9% in Mar-2008 to 79.2% last month, as the airline reduced capacity by 5.6%. The airline added capacity across the Pacific but contracted elsewhere. 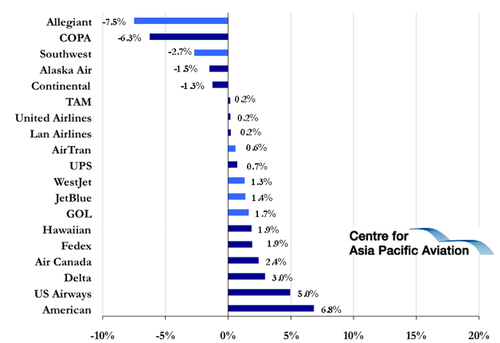