GOL’s shares gained 3.5% on Friday, as the carrier stated its average net yield was maintained at close to BRL17.00 cents, with sales for Nov-2009 and Dec-2009 “already showing clear signs of a recovery”.

The LCC added that the “highly competitive price scenario” began to ease off in the first week of October, although this was the period in which the majority of tickets were sold in the month.

AirTran to generate USD340 million in ancillary revenues in 2009

Also in the Americas, AirTran Airways (+11.8%) stated it expects to generate USD340 million in ancillary revenue in 2009, a 45% year-on-year increase, with CFO, Arne Haak, adding that ancillaries are “very good for AirTran and LCCs” and “are really here to stay”.

The LCC reported a net profit of USD10.4 million in the seasonally weaker 3Q2009 (reversing a net loss of USD94.6 million in the previous corresponding period), marking AirTran’s third consecutive quarter of profitability. Revenues were down 11.3% to USD597 million.

In Europe, the European Low Fares Airline Association (ELFAA) stated seat capacity remained above 2008 and 2007 levels for the fourth consecutive month in Oct-2009. 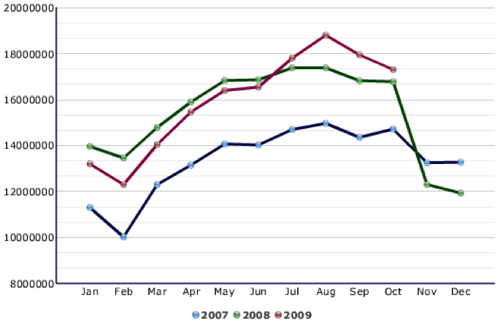 Also in Europe, Norwegian Air Shuttle’s shares slumped 7.1% on Friday, with Ryanair and easyJet both up marginally, by 0.7%. 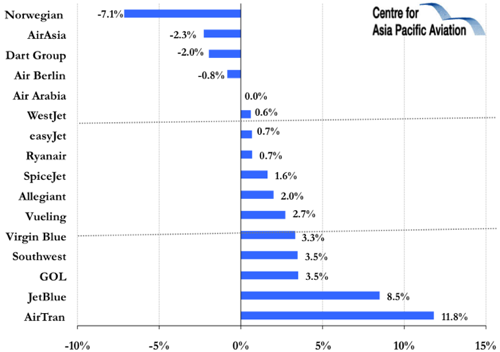