The initiative is a response to the company's rapid growth in recent years and is aligned with its strategic objectives.

Also in the Americas, Allegiant’s shares gained 1.5%, while AirTran’s shares slipped 0.7%, upon the release of the carriers’ Sep-2009 traffic results.

Meanwhile, the fastest growing US carrier, Allegiant, reported a 29% jump in passenger numbers in the month, as capacity (ASMs) increased by 34.2%. Load factors accordingly slipped again in the month, down 2.0 ppts to a still solid 85.3%.

Southwest’s shares slipped 0.1% on volume of 2.7 million shares. The carrier’s stock has traded within a 52-week range of USD4.95 and USD12.19. Southwest is currently below its 50-day moving average of USD9.10.

In Europe, Ryanair’s shares gained 0.8%, upon the release of the carrier’s Oct-2009 traffic results. During the month, passenger numbers were up 15% to 6.2 million, with a stable load factor of 85%,

Also in Europe, Fidelity increased its stake in Vueling to above 4%, according to a filing with stock market regulator, CNMV. The US investment fund reportedly acquired approximately 3% of the 14.3% shareholding that was placed in the market by Inversores Hemisferio last week at EUR11/per share 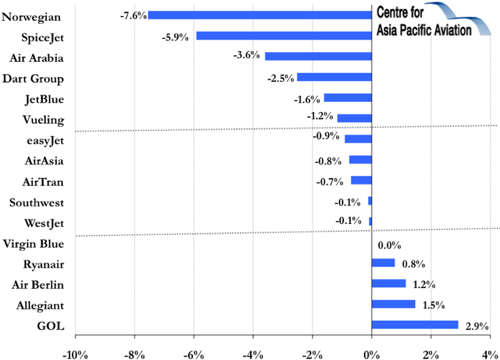