GOL’s CEO, Constantino de Oliveira Jr, meanwhile, stated GOL is raising fares for the first time in a year as the national economy shows signs of recovery.  The carrier is charging passengers an average 12% more in 4Q3009 (compared to 3Q2009 levels), although fares are still “well below” 2008 levels.

Also in the America’s, AirTran’s shares were down by 3.1% yesterday, as the carrier announced plans to introduce seat-back advertising across its 138 aircraft Boeing-fleet.

This new advertising forum will increase ancillary revenue for the company and joins existing onboard advertising, including the carrier’s in flight magazine, seat pocket advertising, advertising on catering items like napkins and flight attendant announcements.

In Europe, easyJet’s shares gained 2.4%, following the previous day’s 3.6% reduction, upon the release of the carrier’s FY2009 financial results.

The LCC has also confirmed plans to launch a six-month cargo operation trial, as part of efforts to enhance its ancillary revenue streams. The carrier will handle cargo on several routes from London for a third-party cargo company later this week. The agreement was signed two days ago. 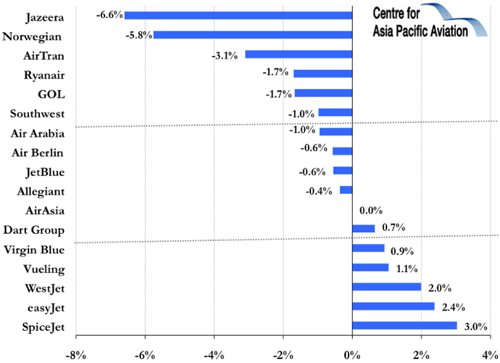