GOL, the Brazilian LCC, had appeared to be arresting the decline in its load factor in Jan-2009, but it slipped again for the second consecutive month in Mar-2009. GOL reported an average load factor of 54.9% last month, declining 2.2 ppts year-on-year, despite capacity cuts of 12.8%. 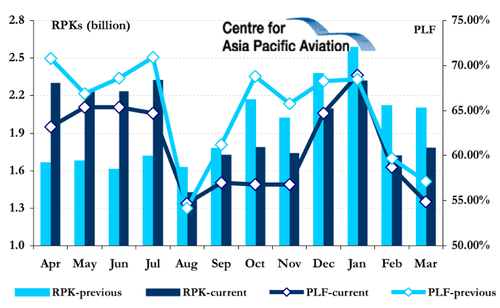 The carrier's international load factor continues to suffer the most, slipping 11.8 ppts, to 43.6%, despite a notable 49.6% capacity (ASKs) reduction, while the carrier's domestic load factor fared a little better, at 56.9%, although this still represented a year-on-year decline, of 0.8 ppts.

As previously reported, GOL has downgraded its passenger forecast for 2009, from 29 to 28 million passengers, and now expects domestic market growth (RPKs) of 2-4%, down from a previously expected 6.0%.

For the whole of 2009, reflecting the network integration, GOL expects consolidated load factors in the range of 61%. Capacity (ASKs) is projected to be 40.5 billion, of which 85.2% is expected to be deployed domestically (an increase from the previously forecast 84.0%).

Strengthens the relationship with Air France-KLM

Earlier this year, GOL stated it is considering wet-leasing some of its grounded B767 fleet and deferring some of the 15 new B737s scheduled for delivery in 2009.

The carrier previously stated it had signed LoIs to sublease three of its seven B767s, although these agreements have yet to be concluded. The carrier also stated it has the option to return some of its B737NG aircraft early to leasing companies this year, although the penalties associated with early returns make this alternative more costly than deferring new deliveries.

As part of this fleet renewal programme, and despite previously-announced fleet reductions, the airline still plans to add new aircraft at a rate of between four and nine aircraft p/a until 2014. GOL currently plans to end 2010 with 115 aircraft, increasing to 121 in 2011 and 127 aircraft by the end of 2012. However, this is subject to change as the carrier has several aircraft leases expiring during this period.

Gollog EXPRESS was approved following the launch of Gollog PRóximo Voo in 4Q08. The new product broadens GOL's cargo services offering, which was responsible for 3% of the company's revenue in 2008.

GOL is also scheduled to launch Gollog DEZ HORAS in Jun-2009. Gollog DEZ HOROS will further broaden the company's offering, focused on the next day delivery of packages and documents by 10:00 to GOL's major cities. 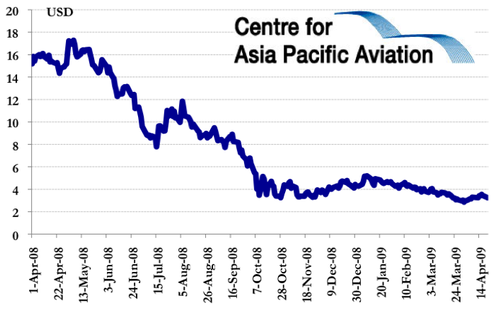