Shares in Brazilian LCC GOL led a stronger share performance for low-cost carriers in the Americas, Asia Pacific and the Middle East. The 4.5% increase in GOL shares brought the carrier's stock to a nine-week high, although its shares are down 13.6% for the year to date.

Shares in European LCCs were less buoyant, with Flybe down 2.3% and smaller falls for easyJet, airberlin, Dart Group and Ryanair. Spanish carrier Vueling was the major exception, up 1.9%.

Tiger Airways has been issued with a "show cause" notice by the Australian Civil Aviation Safety Authority (CASA), following reports of safety, training and maintenance breaches  CASA is requesting evidence to demonstrate that claims made against the airline are not true. Tiger has 21 days to respond to the notice; failure to do so may result in all Tiger aircraft being grounded. It is the first time CASA has taken such action against a main Australian airline since it threatened to stop Ansett operating in 2001. Tiger Airways Australia has denied any safety risk. 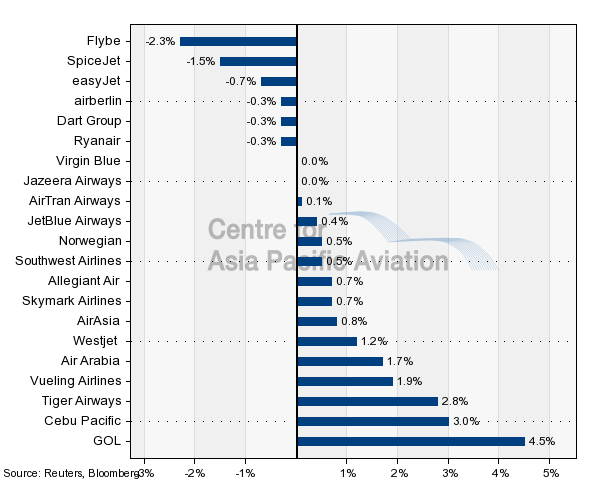