The airline estimates an average 2010 load factor of approximately 70% (well up from 65.3% in 2009), with yields “remaining flat over the 2009 average”. The yield band of between BRL19.50 and BRL21.00 “incorporates scenarios of higher or lower volatility in the capital market and/or changes in the economic scenario or consumer profile”.

GOL expects domestic air traffic demand to increase by between 2.5 and 3.0 times Brazilian GDP (ie between 12.5% and 18.0%), based on historical demand growth in recent years and on the financial market’s estimates of 2010 GDP growth of between 5-6%, “combined with the continuous expansion of Brazil’s potential market, led by the accelerated growth of the country’s middle class and tourism in South America and the Caribbean”.

The 5.5 ppt difference between maximum and minimum demand growth is “directly related to the volatility of the Real in relation to the US dollar, WTI oil prices and the maintenance of their historical correlation”. The LCC added, “the lower the volatility of these assets, the higher its ability to encourage demand and increase its penetration of the potential Brazilian market, one of the most underpenetrated worldwide”.

GOL plans to maintain the strict capacity management of 2009 this year, but growing capacity in line with demand growth. The main drivers of this expansion will be:

Gol’s full guidance for 2010 is as follows (to be revised in each subsequent quarter): 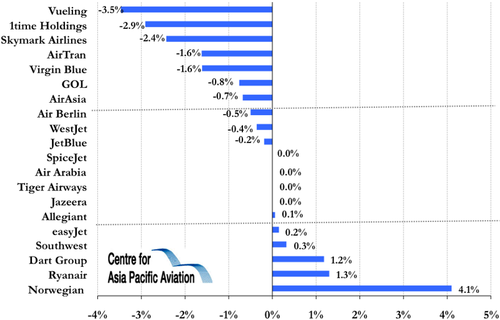