Shares in Latin American carriers were generally lower in trading yesterday, with Brazilian LCC GOL down 3.7%, TAM giving up 2.5% and Copa Airlines 1.3% lower. GOL and TAM have reported that their bonds are trailing gains in Brazilian corporate debt on concern rising oil and personnel costs will have a negative effect on their earnings this year.

Delta Air Lines, Air France-KLM and Alitalia are reportedly in talks with Jet Airways over plans for the carrier to join their trans-Atlantic JV. The carriers are reportedly in the JV negotiations with Jet Airways over its entry into the JV in 2012, ahead of its proposed integration into the broader SkyTeam alliance. The venture between the four airlines would include codesharing, cooperation on FFP programmes as well as cost and revenue sharing on the trans-Atlantic route. Delta Air Lines shares were 2.8% higher in trading yesterday. 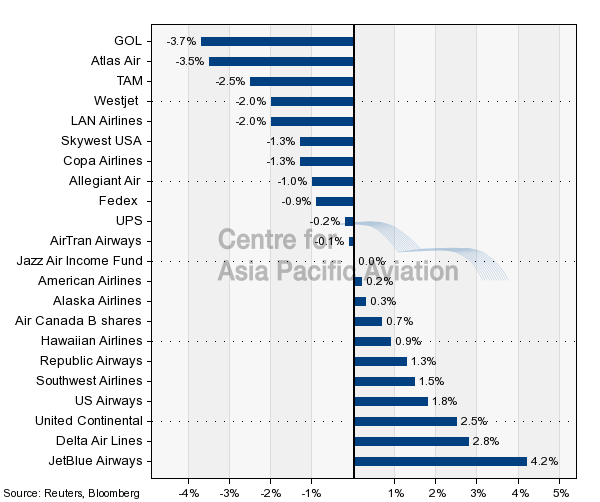