AirTran Airways CFO, Arne Haak, recently stated the LCC is remaining optimistic about its profit outlook for 2009 and is expecting to have “one of the best years in the company’s history” in 2009.

Similarly, Brazil's GOL was also stronger yesterday (+8.9%), after stating it expects to report profits in 2009 as a result of network reorganisation and the introduction of new ancillary services. The airline also recently agreed to postpone the delivery of “some” Boeing aircraft from 2010-2011 to 2011-14. The reorganisation is part of the carrier's attempt to get back on track, after reporting losses in every quarter of 2008, due predominantly to costs related to its Varig acquisition and increased oil prices. 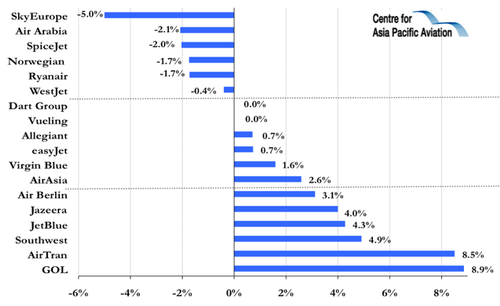