Mr Bisignani stated the “improvement that has started since passenger traffic hit bottom in March is similar to the pace of growth in 2006 and 2007”, adding that “without an exaggerated rebound from pent-up demand, there will be no rapid catch-up to the growth trend established in the 2005 to early-2008 period”.

This echoes similar comments made earlier this month by ACI Europe, in which the airport association stated 82% of European airports have reported reductions in traffic so far this year. ACI Europe now expects that more than 105 million passengers will be “lost” by the end of 2009, meaning that European airports have seen “three years of growth lost” (as passenger traffic has fallen below 2006 levels in 2009), due to the “sharp and entrenched” reductions in air traffic. See related article: Three or four years of growth “lost” by European Airports in 2009: ACI EUROPE

Upon the release of the latest IATA international air traffic statistics for Oct-2009, Mr Bisignani added that “Yields remain under severe pressure”, despite a “modest” increase in air fares since mid-2009. According to IATA, it remains “around 20% less expensive to fly in real terms today than it was a year ago”.

Worldwide IATA scheduled traffic (RPKs) was up by 0.5% in the month, an improvement from the year-to-date decline of 4.7% and significantly better than the 5.4% decline recorded in Sep-2009. Passenger demand is now 6% better than the low point reached in Mar-2009, but 5% below the peak recorded in early 2008, according to IATA. 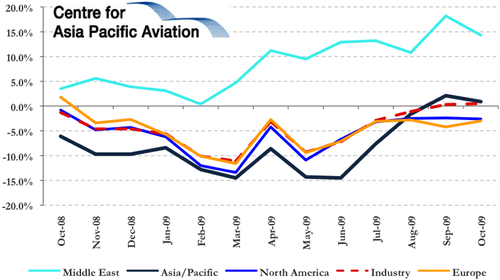 The Middle East – the bright spot

The one bright spot traffic wise remains the Middle East, with the region’s carriers being the only ones to grow by double-digits across the board in the month, with a 14.3% increase in demand (RPKs), on a 15.3% capacity (ASKs) growth. 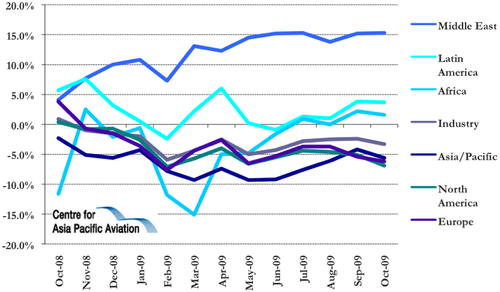 Asia-Pacific carriers saw traffic (RPKs) grow 0.9% in Oct-2009. Despite this being lower than the 2.1% recorded in Sep-2009, carriers in this region, together with the European carriers, have seen demand rise the most from their low points, according to IATA.

European carriers saw a demand decline of 3% in Oct-2009, an improvement from the -4.2% in Sep-2009.  However, demand still remains below 2008 levels due to weakness across the Atlantic and within Europe.

North American carriers, meanwhile, saw “significant” growth in international traffic through the middle of 2009. “Very significant capacity” cuts across both the Atlantic and Pacific have, however, reduced traffic carried in Oct-2009 to 2.6% below Oct-2008 levels.

Latin American carriers saw significant increases in the demand for air travel, growing 9% compared to 3.4% in Sep-2009, as the region’s carriers continue to add capacity (up 3.7% in the month).

IATA added that load factors have risen to pre-crisis levels, which should help alleviate some of the yield pressures. 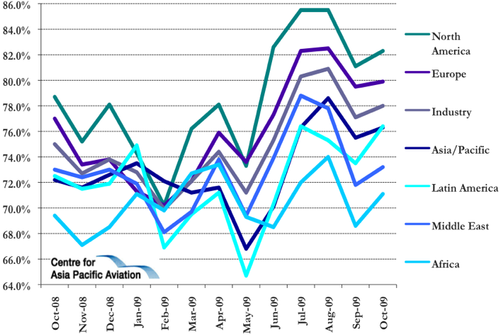 However, on a more positive note, airlines are continuing to carefully manage freight capacity, with many freighters being put into storage or retired, resulting in a fleet reduction of 4.9% (in contrast, the passenger fleet continues to expand by 1.8% as new deliveries more than offset those being stored or retired). However, aircraft utilisation for both wide and narrow-body aircraft is now 6% below early 2008 levels, with this low asset utilisation increasing operating costs.

During Oct-2009, European carriers saw the steepest weakness in demand (RPKs) with a fall of 11.3% year-on-year, but this was relatively unchanged from the 13% reduction in Sep-2009. The region’s carriers were also the most aggressive in adjusting capacity, with a 12.4% capacity reduction.

On the other end of the spectrum, Middle Eastern carriers enjoyed demand growth of 18.4%, a significantly improved result from the 3.6% growth witnessed in Sep-2009, and outpacing the month’s 11.2% capacity increase.

Asia Pacific carriers, meanwhile, saw demand growth of 1.9%, with the region’s carriers benefiting from the air freight generated by the earlier and stronger economic revival in the region, with “industrial production now rising strongly in a number of economies”, according to IATA. 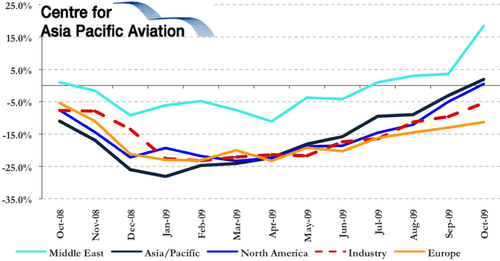 “Structural weakness” in the aviation industry; hyper-fragmented nature of the industry a concern

According to Mr Bisignani, “this recession is re-emphasizing a structural weakness in the industry”. He added that the “inability to merge across political borders has created a hyper-fragmented industry. The industry is financially sick, and the medicine of cross-border consolidation is off limits due to an archaic regulatory structure. Market forces should guide our commercial operations”.

In promoting increased liberalisation and a reduction in ownership restrictions, IATA stressed the positive economic impact of liberalisation and described the current system as archaic, based on a bilateral system established in the 1940s.

He concluded by stating that “managing through this crisis will require all commercial tools that every other industry takes for granted”.

While demand is showing signs of improvement, the precipitous fall in yields and rising costs remain a concern. IATA added that as airlines adjust capacity to better match demand, aircraft are flying fewer hours, increasing non-fuel unit costs. Unspoken is the fact that, notably in Europe, non-IATA airlines are steadily increasing their market shares, often profitably, as the network airlines cut back in order to stem losses.

Meanwhile, the remarkable rise and rise of the (smaller) Middle East markets appears to be defying most world regions.