Global commercial aircraft deliveries fell in 2016 as Boeing again outsold Airbus; 2017 to be a peak

The global commercial aircraft fleet grew by 4% in 2016 and the year ended with an order backlog of more than nine years of production. Among the regions, North America still has the biggest and oldest fleet, but the lowest ratio of orders to aircraft in service. By contrast, Middle East has the fewest in service, but the highest ratio of orders to current fleet numbers.

This report gives an overview of the number of commercial aircraft deliveries in 2016 and the outlook into 2017 and beyond. It also looks at numbers in service and on order by region. It is based on preliminary numbers from the CAPA Fleet Database and guidance on 2016 deliveries from Airbus and Boeing, who have yet to announce final numbers.

The data indicate that total worldwide deliveries fell in 2016, the first such decline for six years, as a result of delays to new aircraft programmes. Boeing delivered more aircraft than Airbus for the fifth straight year, but its deliveries fell short of its 2015 level, while Airbus increased its numbers year-on-year. Total deliveries will likely rise again in 2017, but this may prove to be a peak year.

Aircraft deliveries fell in 2016 for the first time since 2010

According to preliminary figures from the CAPA Fleet Database, the total number of commercial aircraft of all sizes (but not including business jets) delivered in 2016 fell slightly from its 2015 level.

Although the fall in numbers was very small, it was significant in being the first drop in deliveries since 2010, when they fell by 5% to 1,202. Deliveries then increased every year until 2015, growing overall by 39% over the five-year period (a compound average annual rate of 7% pa). 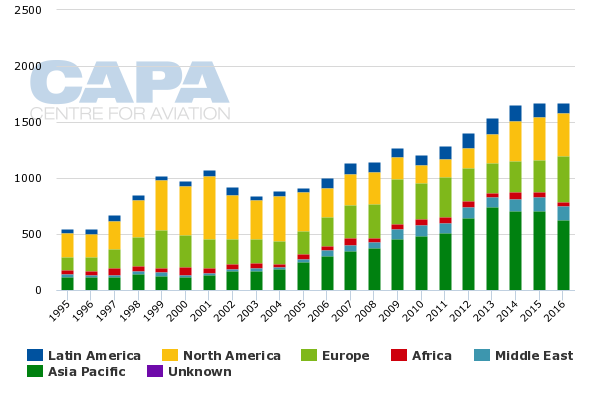 Focusing in on the battle for supremacy between Airbus and Boeing, 2016 was the fifth successive year in which the US manufacturer has delivered more aircraft than its European rival. Airbus has not achieved more deliveries than Boeing since 2011, which was the last year of a nine-year winning streak for Airbus.

Final delivery data for 2016 exceeded guidance for both manufacturers. Boeing delivered 748 aircraft, just above its target of 745-750 deliveries, while Airbus' 688 deliveries was comfortably above its aim for "more than 650".

Although Boeing outsold Airbus once again, the US airframer's 2016 deliveries figure was lower than its 2015 total of 762, whereas its European counterpart's 2016 level was up on its 2015 figure of 635.

The total global fleet grew by 4% in 2016; order backlog rose to 9.3 years of production 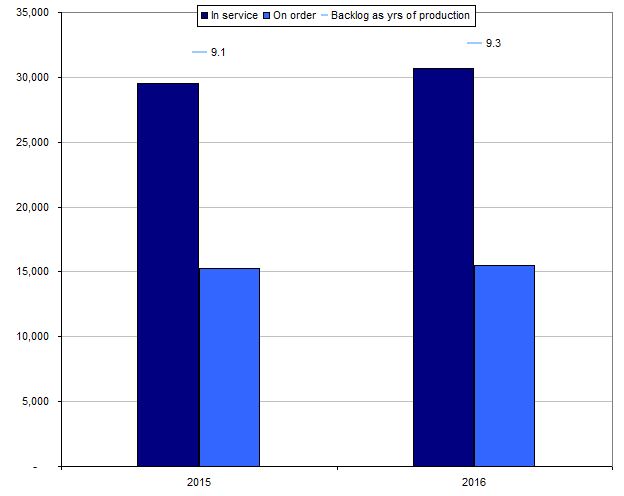 By total fleet numbers, North America continues to be the biggest global region, accounting for more than 9,300 aircraft (as at 3-Jan-2016). Asia Pacific is the second biggest region, with more than 8,400 aircraft, followed by Europe, with just over 7,300. 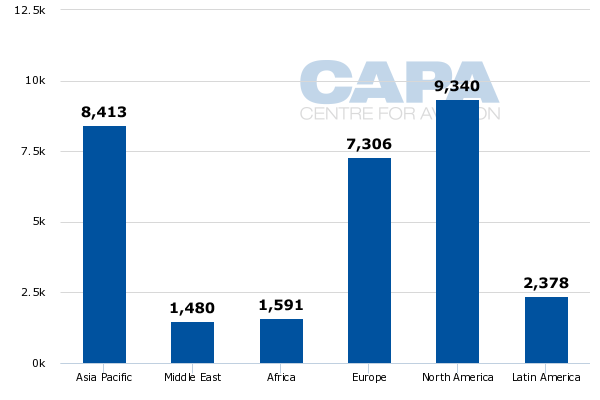 North America's fleet is the oldest; Latin America's the youngest

North America has the oldest aircraft, with an average age of 18.7 years at 3-Jan-2017, according to the CAPA Fleet Database. This is almost twice the average age of 9.5 years in Latin America, the region with the youngest fleet. 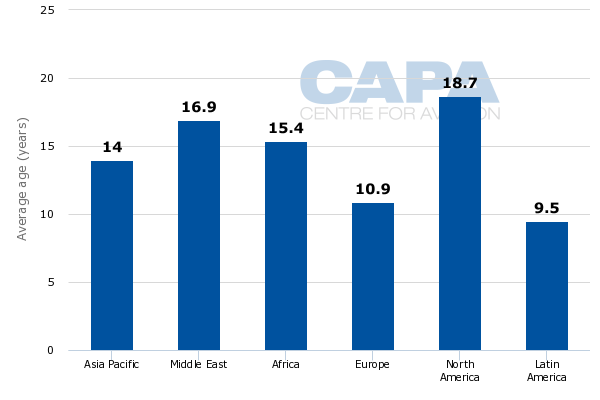 In spite of its having the biggest and oldest fleet, North America has only the third highest number of aircraft on order (2,194) among the global regions. Among the big three regions, North America has the lowest ratio of orders to aircraft in service, with a figure of 23%.

Asia Pacific has 4,589 orders, 55% of the number of aircraft in service and almost double the 2,263 on order in Europe – the region with the second highest number. Europe's orders represent 31% of its fleet in service.

Middle East, the smallest region among the six by aircraft numbers in service, rises to fourth place by aircraft on order. Its figure of 1,313 orders is 89% of the number of aircraft in service, which is an indication of significant future growth in the region.

Latin America has 795 orders, equivalent to 33% if its current fleet, while Africa has just 200 orders, which equates to only 14% of its fleet in service. 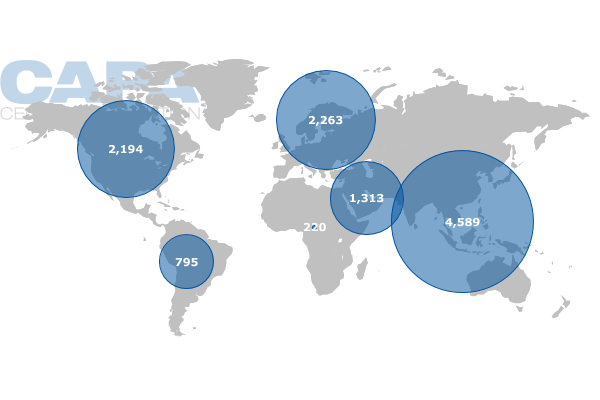 Widebody aircraft: Middle East has more on order than in service

The Middle East's future growth potential clarifies even more sharply when it comes to widebody aircraft, which are the main vehicle of global competition between the regions.

The Middle East has more widebody aircraft on order, 758, than the 718 that it has in service – a ratio of 106%. The 785 widebodies on order in the Middle East make almost the same number as the 775 in Asia Pacific, where the figure of 1,758 in service is more than twice the number of the Middle East's widebody fleet.

Asia Pacific's widebody ratio of orders to aircraft in service is 44%, the second highest among the global regions. Nevertheless, it is less than the 55% ratio that applies to its overall fleet, indicating that a disproportionate number of Asia Pacific orders are for intra-regional aircraft (narrowbodies and regional aircraft).

North America and Europe both have around 1,200 widebodies in service, but Europe's widebody order figure of 385 aircraft is 25% higher than North America's 309 orders.

Latin America has the equivalent of 33% of its widebody fleet numbers on order, the same ratio as for its overall fleet. In Africa, widebody orders represent 29% of its widebody fleet, more than double the 14% ratio for its total fleet. This suggests that African airlines (or at least some of them) are more focused on aircraft for long haul expansion (and/or replacement) than for intra-regional operations. 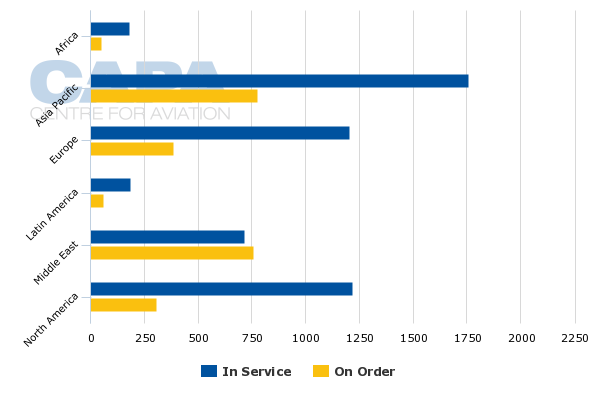 The very small year-on-year fall in delivery numbers in 2016 will not be repeated in 2017, based on current data recorded in the CAPA Fleet Database.

Although at this stage of the year the number of deliveries is subject to some uncertainty and change, the total for 2017 is currently projected to rise by 19% to 1,986.

Moreover, 2017's higher delivery expectations are also the result of the industry's need to catch up from delays to a number of new aircraft programmes that reduced numbers in 2016 (these included the Airbus A350 and A320neo and the Bombardier CSeries).

Without these delays the number of deliveries might have been expected to rise in 2016 and again in 2017, albeit at a slower rate than is now projected for 2017.

Boeing to deliver more than Airbus for sixth straight year

Current data in the CAPA Fleet Database indicate that both Airbus and Boeing will enjoy year-on-year growth of 12% or 13% in delivery numbers in 2017 (growth rates assume 2016 deliveries in accordance with the companies' published guidance).

The Database suggests 2017 delivery figures of 732 for Airbus and 840 for Boeing – giving the US manufacturer a sixth successive year of outselling its European rival. 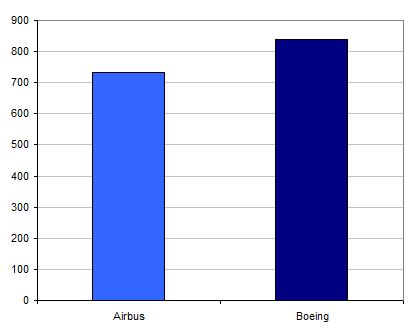 Airlines and aircraft orders are notoriously conspicuous when it comes to political confrontations, particularly where trade issues are at stake. Incoming President Trump has relatively indiscriminately attacked China on several fronts, both politically - challenging the One China policy - and in trade terms - threatening among other things to levy taxes on Chinese exports to the US.

What he will do once in office is still everybody's guess, but there is a real chance of a US-China arm wrestle over trade conditions in 2017.

According to CAPA's Fleet Database, Boeing has 180 aircraft scheduled for delivery to China in 2017. These will be nervous times for the manufacturer's executives at 100 North Riverside, Chicago.

Deliveries may fall again in 2018; another pointer that airline industry margins may have already peaked

Looking further ahead, into 2018, is subject to even more uncertainty, but the CAPA Fleet Database currently suggests that total delivery numbers will fall to levels similar to the numbers achieved in 2016.

This indicates that 2017 could be a cyclical peak for deliveries (the mini-peak of 2015 was illusory, created by the drop in deliveries in 2016 caused by delays to new aircraft programmes).

In previous cycles a delivery peak has typically arrived after a peak in the airline industry's operating profit margin, although this pattern has been less visible over the past decade than in previous decades.

However, this deliveries outlook adds to the view that the airline industry experienced a margin peak in 2016 and may now be entering the downswing in its profit cycle.