Germany’s two major carriers, Lufthansa and Berlin, both felt the effect of current market conditions in the European market in Oct-2009, with Air Berlin reporting its first year-on-year revenue reduction in 18 months, and Lufthansa stating the market environment is “still defined by price pressure”.

Air Berlin reported a 1% reduction in revenue per ASK to EUR 6.13 cents, for the first year-on-year reduction in 18 months. 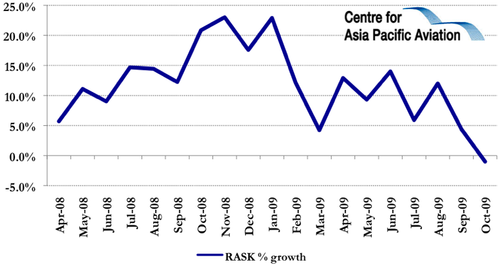 However, the actual RASK level remains above EUR 6.00 cents, as has been the case since Jun-2009, and the carrier’s two-year change in RASK level remained up by double-digits (+19.9%) in the month. 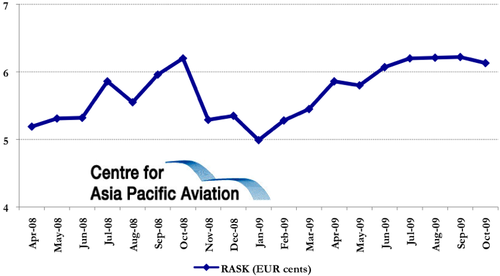 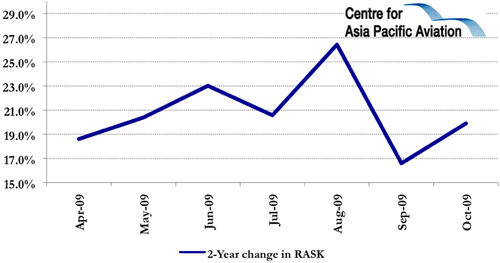 The German LCC transported 2.7 million passengers in the month ((including TUIfly's former city connections), a 0.9% reduction, as the carrier implemented a targeted 1.2% capacity (ASKs) reduction. 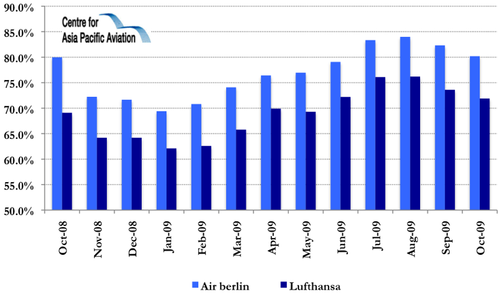 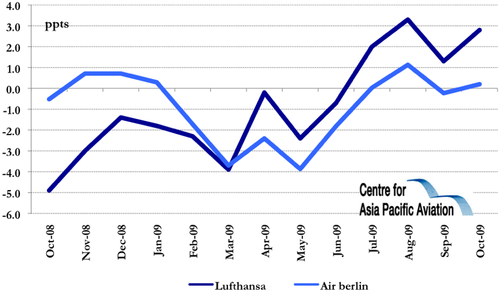 On the release of its carrier’s 3Q2009 financial results, Lufthansa stated the market environment for passenger transportation remains “still very difficult” and that the industry is “still a long way away from a recovery”. The airline added that “initial signs of a stabilisation in volumes are far away from making up for the enormous and unrelenting pressure stemming from the massive fall in price levels”.

Elaborating further on these pressures, Lufthansa added that, “for the remainder of the current year, the dominant factors are expected to remain weak demand and continuing heavy price pressure. These effects may be accentuated if the economic crisis blights consumer spending in the winter months, which are usually weaker anyway. Lufthansa Passenger Airlines and its partners are therefore preparing for a challenging fourth quarter”.

During the Oct-2009, Lufthansa Group’s traffic data was affected by the consolidation of both British Midland (bmi) and Austrian Airlines (AUA), which have been reported as part of Lufthansa Group traffic since Jul-2009 and Sep-2009 respectively. 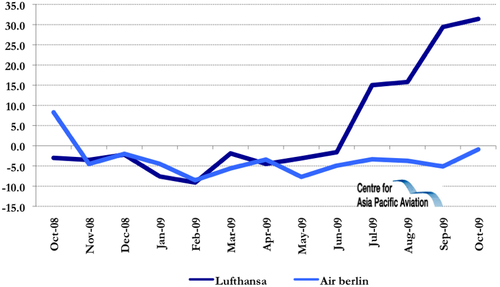 On a system-wide, Group-wide basis, Lufthansa’s passenger numbers, capacity (ASKs), traffic (RPKs) and load factors were all up, by 27%, 15%, 17% and 1.7 ppts, respectively. Without the effects of consolidation, and creating a more realistic picture, sales on a “like-for-like” basis were up slightly, by 0.5%, while the Group cut capacity by 2.5%.

Meanwhile, Lufthansa Passenger Airlines, which includes Lufthansa Regional and Lufthansa Italia, reported a 1.5% increase in European passengers in the month, to 4.0 million, despite a 1.3% capacity (ASKs) reduction in the month. Load factor improved 2.4 ppts to 70.5%.

According to IATA CEO, Giovanni Bisignani, "the situation you see with yields could be a long-term disaster because when yields fall they almost never recover. That could lead to long-lasting structural change”.

Separately, IATA upon the release of its Sep-2009 traffic results stated European carriers continue to see a deterioration in demand, adding, that this “partly reflects a loss of market share by network carriers on short-haul routes to low-cost carriers”.

This trend has been acknowledged by Air Berlin, who has acknowledged that it has benefited from trade downs by business travellers from full service carriers, with CEO, Joachim Hunold, previously stating that the slowing economic conditions in Europe “could be an opportunity for us, as it increases cost-consciousness”.

Lufthansa, meanwhile, stated that it “has to be assumed that a large part of the fall in revenue – particularly in European traffic – is structural in nature”, and thus a structural response is required.

Association for European Airlines (AEA) Chairman for 2009, Dr Ivan Misetic of Croatia Airlines, also sees these changes as long-term, stating,  “the dimensions of this downturn are unprecedented, said the AEA Chairman. “In the past 35 years we have not seen such devastation of value. And we will not return to ‘normal’ again; the consumers are changing their expectations, and this will continue.”