AerCap and Genesis Lease have continued their strong recent share price performances, reporting gains of 3.8% and 4.6%, respectively yesterday, as they draw ever closer to their merger, expected to be closed on 25-Mar-2010.

Since 23-Feb-2010, AerCap’s share price has shot up 26.1%, while Genesis Lease has gained 25.8%. The two companies both reported strong 2009 results, although AerCap’s revenue suffered in comparison to 2008 as the company had significantly reduced revenue from the sale of aircraft, engines and parts inventory.

Elsewhere in the aviation supply chain, B/E Aerospace also traded up strongly yesterday, gaining 4.4%, following an investor webcast. The stock hit a 19-month high of USD27.05 per share, and has gained 5.9% over the past three days. The company reported a 21.1% drop in 2009 revenue and a 24.8% in operating earnings, but forecast favourable quarterly earnings comparisons to 2009 beginning from 2Q2010.

The company’s outlook for 2010 is strong, with bookings and orders expected to exceed deliveries this year, building its order backlog and driving a “significant increase in revenues, earnings and cash flows beginning in 2011.” The company has been talking to major customers and sees stronger planned commercial aircraft spares purchases, along with a marked pick-up in request for quote activity, as well as the conversion of a portion of the supplier furnished equipment programme awards.

Meanwhile, Expedia also reported a notable gain yesterday, with its stock gaining 4%. The stock has suffered this year, despite forecasts of a recovery in airline and hotel traffic improving the long-term outlook for the online travel agency. Competitor, Travelocity, reported that US domestic and international fares during the Spring Break period rose 9%. However, Expedia’s Hotels.com brand released its Hotel Price Index yesterday, reporting a 14% decline in worldwide hotel room rates, with rates now below 2004 levels, when the index was launched. 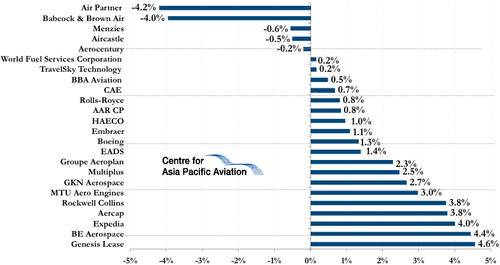