Continuing our examination of shifting travel patterns based on the rise of the Gulf carriers, we once again look at India, a nation whose carriers have yet to achieve their long-haul potential.

Turkish Airlines not part of the mix – yet

In the case of India, Turkish Airlines is not yet a major player in the market but its extensive European network offers more potential for Europe-India traffic than is presently offered by the Gulf airlines.

India has a long history of restrictive aviation policies that have, for decades, limited foreign carrier access primarily to the two major cities, Mumbai and Delhi. Over the past decade, with increasing liberalisation and given the increased economic importance of other points such as Bangalore and Chennai, some European carriers have begun flying directly to these cities from their hubs.

However, it remains a rather small club, with only the three biggest European hubs – London, Paris and Frankfurt – having additional flights. While a few new cities certainly constitute an improvement, the bulk of the Europe-India traffic, and by extension connections from the Americas, still flows over Mumbai and Delhi. 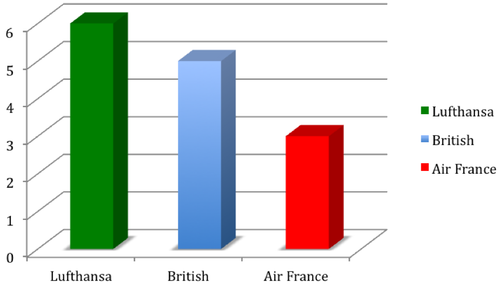 With six Indian destinations, the winner is Lufthansa. Since the airline operates flights to India from both Frankfurt and Munich, its advantage is even more obvious when looking at the number of seats that Lufthansa puts into the market – 22% more than runner-up British Airways. 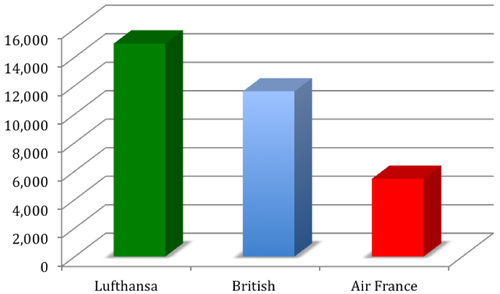 Unfortunately, the Indian carriers lag in competition with their European rivals. With the exception of a daily flight from Chennai to Brussels, the three Indian carriers fly only from/to Mumbai and Delhi. Even in those instances, their seat offer is also smaller. 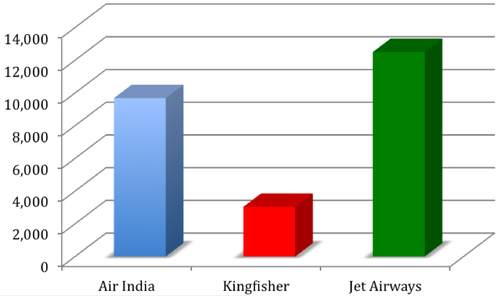 Unfortunately, the Indian airlines remain outgunned in their home market on European routes. But if that were the only challenge, the situation would be far less bleak.

Putting the Gulf airlines into the comparison completely alters the equation, with their combined seat totals exceeding the other two groups combined. While that would not be the case were all European operators (i.e. Swiss, Finnair…) to be tallied, the result would still be a poor comparison as almost all of the European capacity would be focused on but 2 Indian cities.

Seats per week for Gulf carriers, European carriers* and Indian carriers
between Europe and India: 24-Oct-2011 to 30-Oct-2011 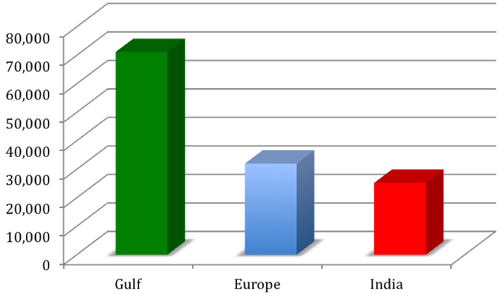 Additionally, the three Gulf carriers provide service to a great many more Indian points (Qatar: 12; Emirates: 10; Etihad: eight), offering a far larger selection of destinations as well as the ability to offer a single connection to a far more diverse set of travellers.

The potential of Turkish Airlines

But while the Gulf triumvirate receives a great deal of press for the way they swamp markets with capacity, Turkish Airlines might eventually pose a greater threat, as it puts more focus on the number of destinations as opposed to the number of seats. At present Turkish flies only the obligatory routes to Mumbai and Delhi, but CEO Temel Kotil makes no secret of his desire to add significantly to the carrier's Indian routes. If that comes to pass, a much larger and inclusive European network would provide Turkish with an advantage between Europe and India.

With 43 European routes – compared to 26 for the next in line, Emirates – and an expanded schedule to India, Turkish Airlines has the potential to link far more city pairs than any of its current competitors. 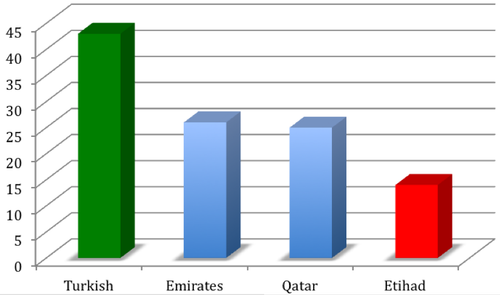 Different fleet structure and distance adds to the possible edge

Additionally, and despite the disparity of aircraft size, Turkish’s mostly narrowbody fleet still provides more seats than are available on Emirates, A380s notwithstanding. Although none of the players is finished adding European points, the fleet composition of Turkish, combined with shorter sector lengths, makes it far easier for the airline to add smaller cities than is the case for its Gulf contemporaries, with nearly 2000 additional miles to cover to get to much of Europe. Lisbon-Istanbul, at about 2000 miles, is a practical sector for a B737 or A320; but at more than 3800 miles, Dubai is not. While India’s international traffic may experience a great deal of expansion in its future, the die may be cast as to just how those travellers will get to the subcontinent. Further expansion by the Europeans is possible but not probable as alternative one-stop routings grow. The Indian network carriers financially stretched and are unlikely to meaningfully expand their long-haul networks in the near term.

The Gulf hubs will doubtless be the primary beneficiaries of traffic growth in the short term, and they have, from early on, seen India as a primary building block of their success. They are not likely to abandon that mindset, however at present they are facing a freeze on new bilaterals, with current entitlements exhausted in the case of Dubai and Qatar.

Finally, Turkish Airlines has a great deal of potential for growth in this sector if they are able to add destinations in India. However, the growth plan at Turkish envisions adding more traffic via Istanbul from/to a wide assortment of city pairs and with segments of various lengths. They are probably just as interested in connecting traffic to Baku as to Bangalore and may be content with a decent, but far from dominant share to the sub-continent.