The new consortium, which includes three Japanese companies and Singapore’s Changi Airport, expects international passenger traffic will increase to 16 million by 2048, compared to close to 7 million in 2018. Domestic passenger traffic, which has grown at a very slow pace this decade, is projected to increase to only 19 million by 2048, compared to approximately 18 million in 2018.

The Fukuoka HD consortium has a target of securing nearly 40 new international routes over the next 30 years, including new long haul routes to Europe and North America. Its plan is to expand the airport’s international terminal, as well as to develop a dedicated LCCT to accommodate the anticipated growth.

Top 10 airports in Japan ranked by passenger traffic for 7M2018

Fukuoka has been one of Japan’s fastest growing airports this decade. Traffic has increased by over 50% since 2011, when the airport handled 15.6 million passengers. Growth peaked in 2012 at 12% but has continued at a steady rate. Passenger traffic was up by 8% in 2017 and by 4% in the first seven months of 2018. 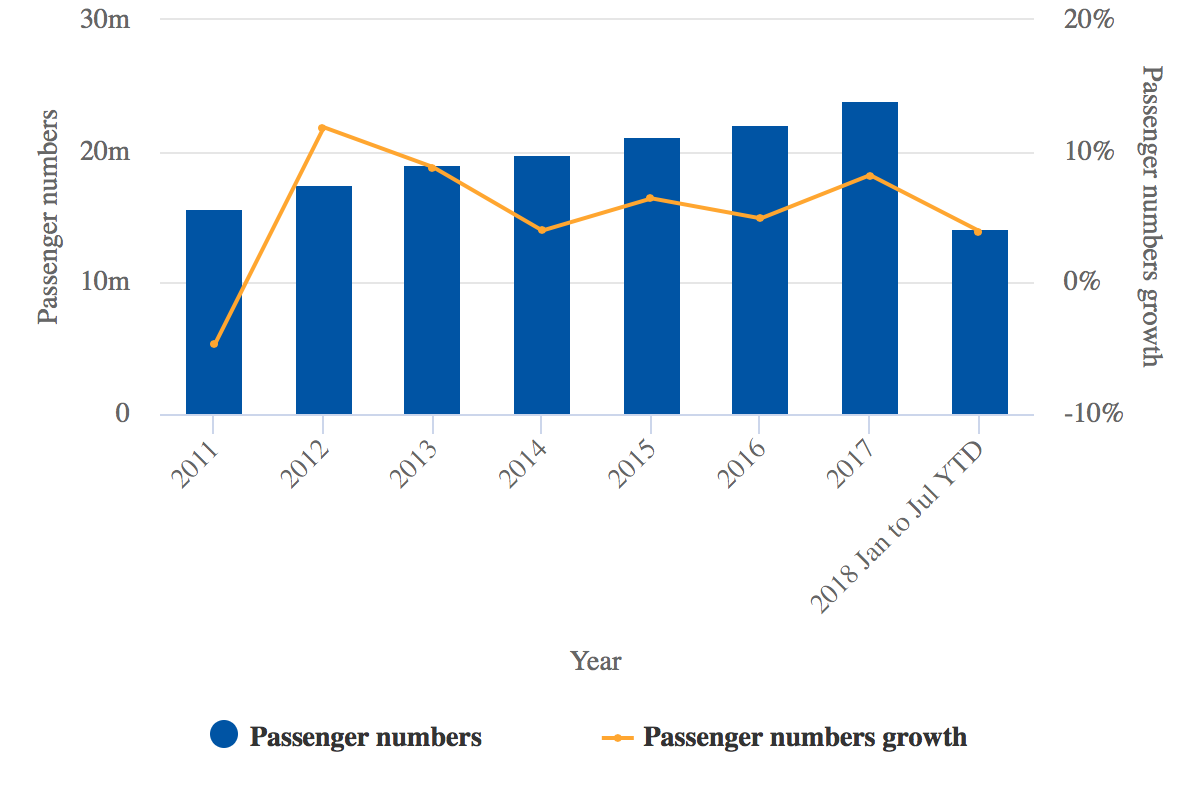 Fukuoka is still mainly a domestic airport. However, international now accounts for nearly 30% of total traffic, by contrast with 16% of traffic in 2011.

Domestic traffic has grown by less than 20% over the past 10 years, whereas international traffic has tripled. 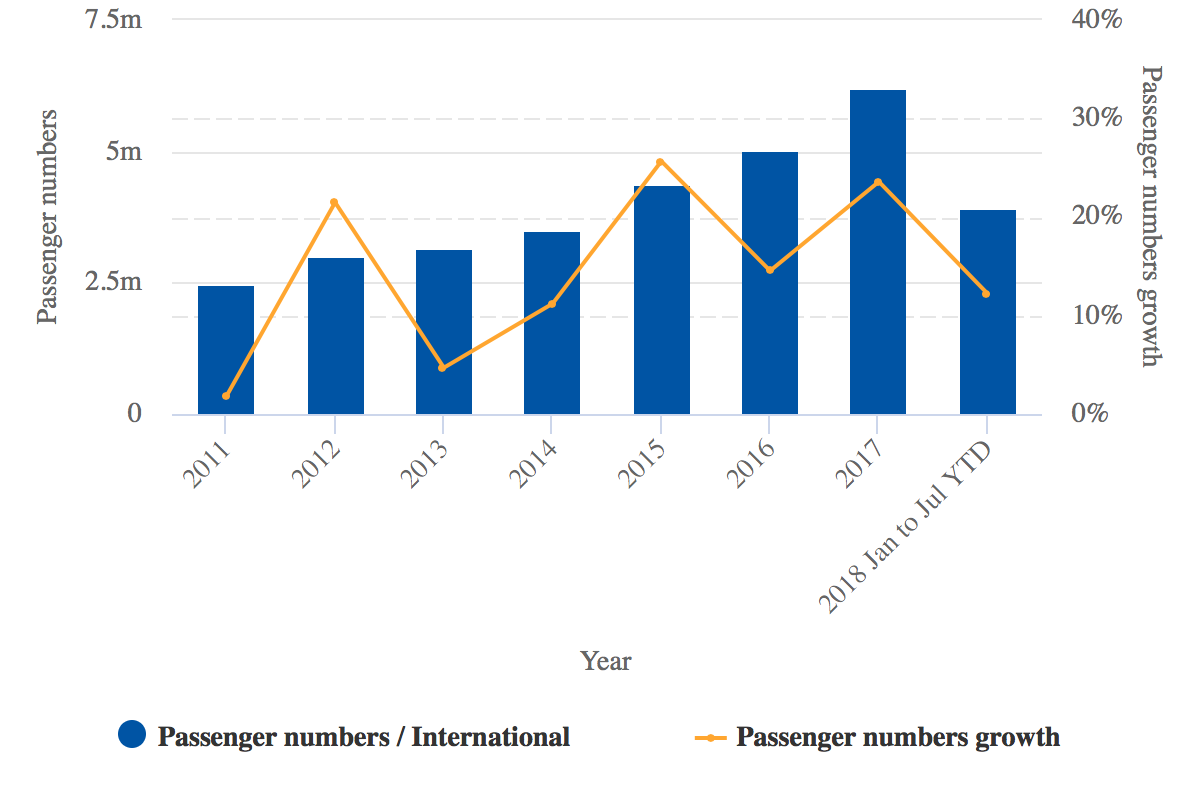 Fukuoka Airport has benefitted from the regions of southern Japan and Kyushu Island emerging as a popular tourist destination. Overseas visitors to Kyushu increased by nearly 30% in 2017, to 4.8 million, according to the Kyushu District Transport Bureau. Kyushu overseas visitor numbers have increased rapidly since 2014, when there were less than 1.7 million overseas visitors.

Korean LCCs account for most of the recent international growth

Korea is the biggest source market for Fukuoka and Kyushu tourism. The Korean market has grown rapidly in recent years, driven by rapid expansion from LCCs.

All six of South Korea’s LCCs now serve Fukuoka. By capacity, Air Busan and Jeju Air are the largest airlines in Fukuoka’s international market. Air Busan operates 42 weekly services to Fukuoka and Jeju Air operates 40 weekly services. Both have more than 8,000 weekly one-way seats to Fukuoka, and each has approximately a 20% share of total Fukuoka-South Korea seat capacity.

Air Seoul has a small presence as it is the newest Korean LCC and only began serving Fukuoka in late Aug-2018. The five other Korean LCCs have been in the Fukuoka market for at least two years, and have consistently added capacity.

Although Air Busan and Jeju Air have more services, Korean Air has about the same amount of seat capacity, since some of its Fukuoka services are operated with widebody aircraft. Asiana also uses a mix of narrowbody and widebody aircraft in the Fukuoka market.

Korean Air has nearly a 20% share of Fukuoka-South Korea capacity, matching Air Busan and Jeju Air, while Asiana has approximately an 11% share. (Asiana and Korean actually have larger shares as airline groups because Jin Air is under Korean and Air Seoul and Air Busan are under Asiana.)

By capacity, Korean and Asiana are both among the five largest airlines serving Fukuoka’s international market (along with Air Busan, Jeju Air and Jin Air). However, Korean has about the same amount of capacity in Fukuoka as it did seven years ago, whereas Asiana has less capacity.

Taiwan and China have grown, but not as fast

Taiwan and China are the next largest international markets from Fukuoka and are growing source markets for the local tourism industry.

However, Taiwan and China are relatively small markets compared to Korea, accounting for 14% and 10% of current international seat capacity respectively. They also have not grown nearly as fast as South Korea in recent years. Over the past four years Fukuoka-Taiwan seat capacity has increased by close to 50%, whereas Fukuoka-China capacity has grown by only 30%.

Taipei is the second largest international route from Fukuoka and is served by four airlines – China Airlines (CAL), EVA Air, Tigerair Taiwan and the Japanese LCC Vanilla Air. CAL currently has 17 weekly services on the route and the other three competitors have one daily service. EVA and Tigerair Taiwan also each operate five weekly services between Fukuoka and the second largest Taiwanese city of Kaohsiung.

Manila is the only other international route that is served by more than one airline or with more than seven weekly frequencies. Philippine Airlines serves Fukuoka-Manila daily and the Philippine LCC Cebu Pacific operates three weekly services.

The airport’s new consortium is keen to attract more services to Europe, supplementing Finnair – which has been in the market on a summer-only basis since 2016. Securing a service from a Gulf airline could also help Fukuoka’s ambitions to increase European visitor numbers.

Fukuoka is also keen to attract a service to the continental US, which would enable Kyushu to boost American visitor numbers. Honolulu caters almost entirely to outbound Japanese tourists.

While more long haul services are a possibility, clearly most of the growth opportunities are within Asia. North Asia demand continues to grow, and South Korea, Taiwan and China will remain the main source markets for Fukuoka’s tourism sector.

The Southeast Asia market should also experience rapid growth as Fukuoka is well positioned geographically for long haul narrowbody flights. Fukuoka is closer to Southeast Asia than Osaka, Tokyo or Sapporo, making it within range of several potential new Southeast Asian destinations through the use of A320neos or 737 MAX 8s.

Vanilla is in the process of merging with Peach, which has a domestic operation at Fukuoka and recently committed to acquiring A321neoLRs to support new long haul routes to Southeast Asia. Jetstar Japan is the largest domestic LCC in Fukuoka and could also operate international services from the city in the future.

LCCs already account for nearly 50% of international capacity at Fukuoka and should drive yet another phase of international growth for Japan’s fourth largest airport. The planned LCCT should help attract several new LCCs, as well as more capacity from existing LCCs.