As part of its restructuring plan, Frontier is cutting Milwaukee and Kansas City capacity effective 01-Nov-2011 resulting in 213 layoffs at the airport and eliminating six destinations out of Milwaukee.

Frontier has been clawing its way out of bankruptcy while combining operations with merger partner Midwest Airlines, and is now in the middle of a USD120 million cost-cutting restructure that includes capacity and employee cuts. The story is told with the impact on its Denver market where it is competing with Southwest/AirTran as well as United. 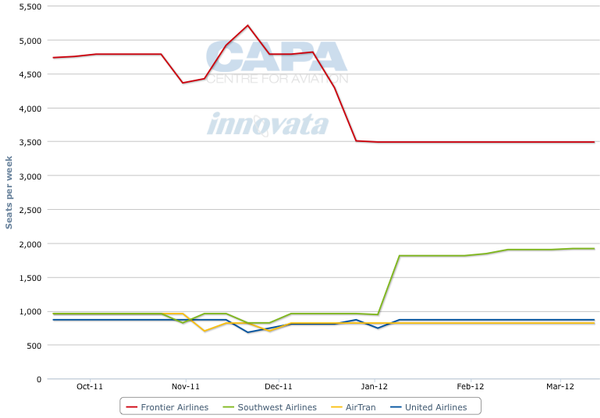 As seats go, so does market share. While Frontier will have the greater market share next spring, Southwest/AirTran will not be far behind. Meanwhile, traffic at Milwaukee was up in the first half although it declined in August on the back of depressing economic news. 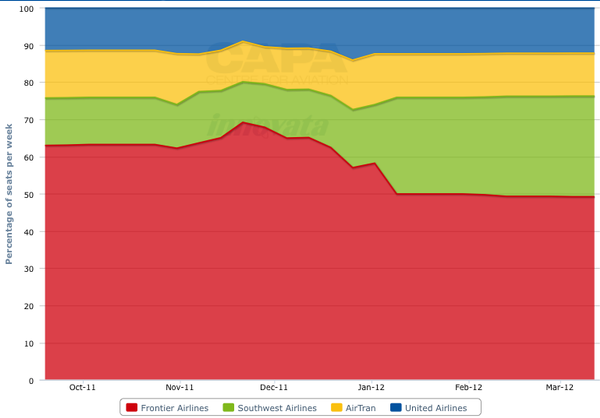 The same can be seen in the Las Vegas and Orlando markets where Southwest/AirTran overwhelm Frontier in terms of market share. This is likewise the case at St Louis. In the Kansas City market, which Frontier had been trying to build, the market is fairly evenly split between the two low-cost carriers.

Southwest serves only nine points out of Milwaukee compared to 29 for Frontier. However, many of Frontier’s routes are decidedly small including Flint, Rhinelander, Manistee, Madison and Branson and Southwest/AirTran competes on all four Florida points and has the largest market share on its Cancun route.

In its cutback announcement, Frontier included suspension of service toi Green Bay, also served by Allegiant, as well as Madison, Des Moines, Cleveland, Dayton and Minneapolis, reducing daily departures from 67 to 45 and grounding its six ERJ-145s.

Frontier route map out of Milwaukee 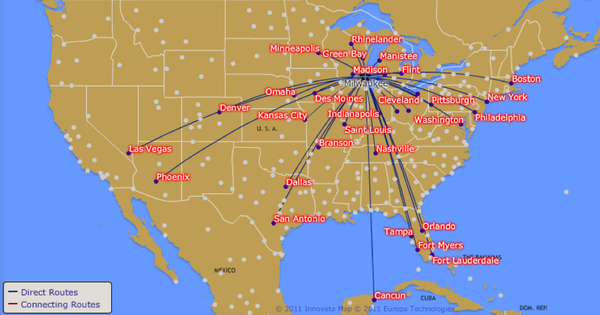 Southwest route map out of Milwaukee 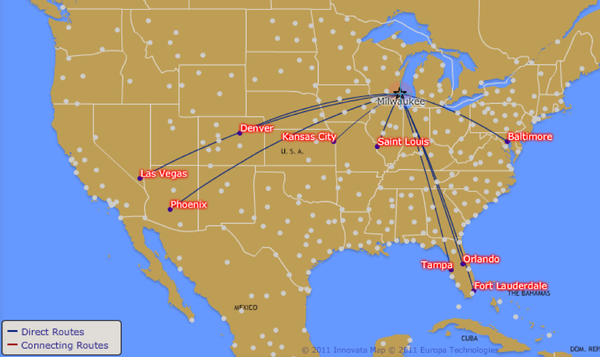 AirTran route map out of Milwaukee 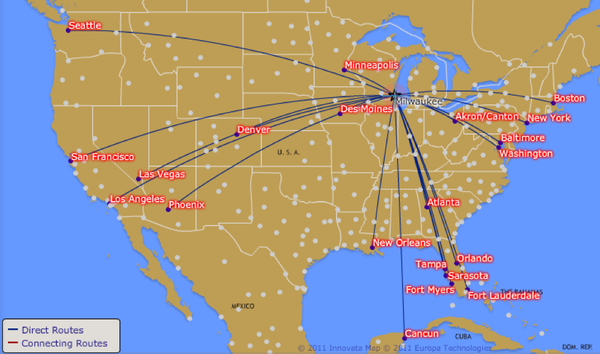 Frontier is clearly competing on fares given its new marketing campaign which replaces its popular “spokes animals” with the tag line “Fares so low everyone’s flying”, suggesting that even the spokes animals are making travel plans. The airline cited Department of Transportation (DoT) statistics for making the low-fare claim, which covers Denver, Milwaukee and Kansas City. Even so, competing on fares has been a recipe for disaster in the past, especially given the high fuel costs Frontier faced until very recently.

Cuts are also being made at its Kansas City hub where it fields regional jets, which are far from cost competitive in a high-fuel environment. According to Frontier spokesperson Peter Kowalchuk, the regional jets have incurred about USD25 million in losses on their respective routes during the first half of 2011. This will only worsen as it goes into its annual low season.

In an effort to expand its revenue by chartering its aircraft to Apple Vacations, Frontier will expand its destinations by five international routes. Flights will come out of the midwest and northeast, according to the multi-year agreement and will include such Central American and Caribbean destinations as Cancun, Mexico; Huatulco, Mexico; Liberia, Costa Rica; Montego Bay, Jamaica; and Punta Cana, Dominican Republic.

CEO Bryan Bedford cited the economic stability the deal gives Frontier, especially during its slow season. Mr Bedford also said he would like to try innovative ticket sales techniques such as Groupon and other social couponing venues as well as Google. While Groupon has been known to bring in more traffic, it has not resulted in increasing profits. This said, Mr Bedford stated any such innovative deals would have to be profitable for them to get off the ground. Frontier has already renegotiated ticket distribution fees as part of its USD120 million cost-savings efforts to save the airline. The idea would be to find a new, cheaper distribution channel effective in changing travel patterns.

With per-barrel and jet-fuel costs on the downward trend, Frontier will have a respite in trying to cover fuel costs but this is still no guarantee given the volatility of the markets.