Frontier Airlines: guessing the ultimate strategy for its new A321XLR

Frontier Airlines’ recent announcement that it was converting 18 Airbus A320neo orders to the A321XLR generated a fair amount of speculation over where those aircraft would ultimately be deployed, despite the fact that those aircraft are not scheduled for delivery until 2024.

The company’s comments about possible flights to Hawaii set the industry abuzz, that Frontier would become the latest airline to add flights to a market that has recently undergone significant capacity additions and pricing weakness. It is also a market that could undergo changes in the five-year period before Frontier begins operating its new long range aircraft.

There’s also the possibility of Frontier adding long haul service to Europe, which seems like a lesser possibility than service deeper into Latin America, where prospects are more promising.

In 2017 Frontier’s parent company Indigo Partners placed a massive Airbus order for 430 aircraft, of which 134 were allocated to Frontier. The other narrowbody orders were spread across Indigo’s other ULCC airlines – Chile’s JetSMART, Wizz Air and Volaris.

During the 2019 Pairs Air Show Indigo placed an order for 32 XLRs and opted to convert 18 of Frontier’s 18 A320neos on order to the XLR. Of the 32 new orders, twenty of the long range jets will be allocated to Wizz and 12 to JetSMART.

In North America, the conversion of 18 jets in Frontier’s order book to the A321XLR drove a fair amount of intrigue about the exact role those aircraft would play in Frontier’s fleet – especially after the airline declared that the jets could allow Frontier to serve Hawaii.

Data from CAPA and OAG show that as of late Jun-2019 United offers daily service from Denver (Frontier’s largest base) with Boeing 777 widebodies. According to Hawaii’s Pacific News Now, Frontier executives have determined that the Denver-Hawaii market is not as large as California or Phoenix to Hawaii.

It is hard to determine whether Frontier will actually serve Hawaii in five years, but a quick study of Frontier’s network could lend clues.

As of late Jun-2019, Frontier operated a total of 107 nonstop destinations, according to CAPA and OAG – 101 domestic and six in Latin America and North America.

Frontier also serves Los Cabos in Mexico from its largest base in Denver. Its other international service includes flights between Philadelphia and Montego Bay and between Punta Cana and Cincinnati, Orlando, St Louis and Cleveland.

The airline also operates service from Denver to Calgary and from Puerto Rico to Atlanta, Orlando, Philadelphia and Raleigh-Durham.

The majority of Frontier’s international routes are less than daily, with the majority, five, featuring three weekly frequencies. 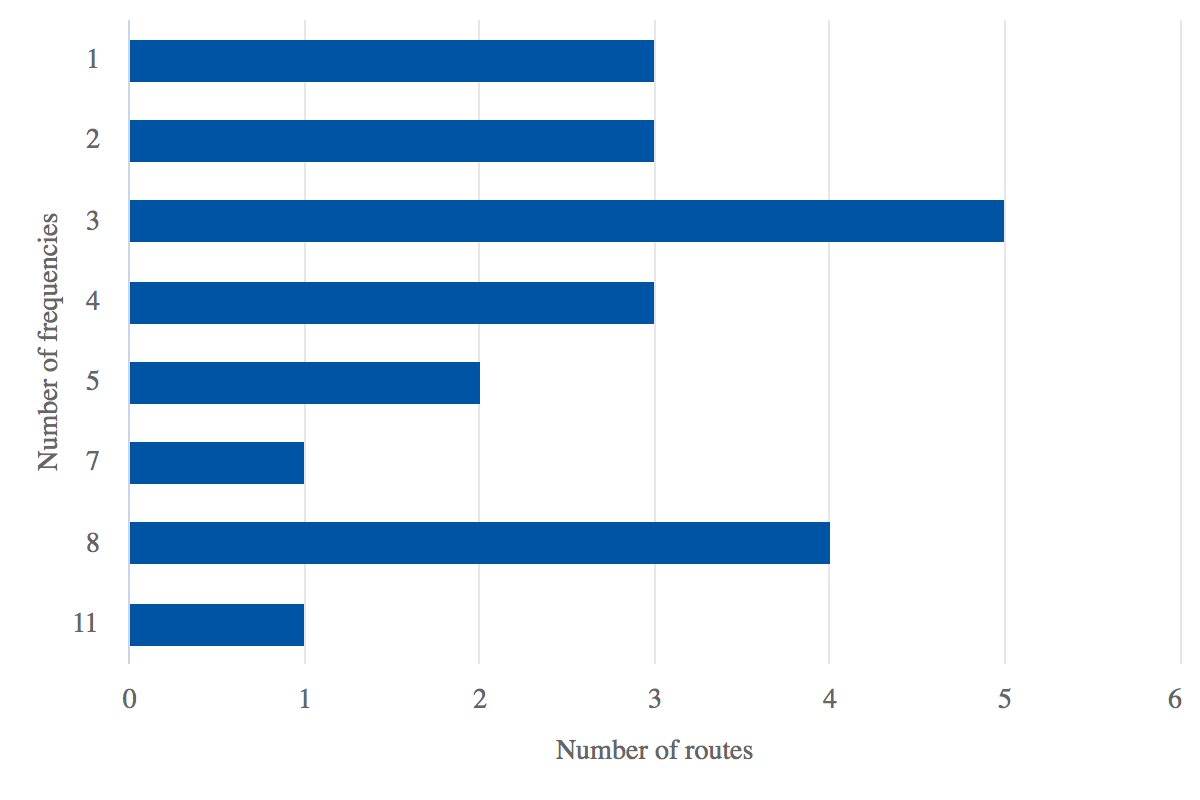 There is not a lot of history of ultra low cost service between the US mainland and Hawaii. Allegiant served the islands with Boeing 757s beginning in late 2012 from smaller markets that included Bellingham, Boise, Eugene, Fresno and Stockton, and from the larger markets of Phoenix, Los Angeles and Las Vegas.

But the airline slowly cut services, leaving just Los Angeles and Las Vegas before ending those flights in 2017.

More recently, Sun Country, which is in the midst of transitioning to an ultra low cost airline, has added flights to Hawaii. Schedules in CAPA and OAG show that as of late Jun-2019 Sun Country offers daily service from Los Angeles to Honolulu, two weekly flights from Portland International to Honolulu, and three fights per week to Honolulu from San Francisco.

At the recent CAPA Americas Summit in Denver, Colorado, Sun Country CEO Jude Bricker explained that the airline had identified opportunities to operate into markets that peak seasonally to tap into unmet demand for leisure travellers. The way that incumbent airlines meet that demand is “to jack up prices”, Mr Bricker said.

Using Sun Country’s service from Los Angeles to Honolulu, launched in the summer of 2018, as an example of a market where the airline can achieve success on a seasonal basis, Mr Bricker said that the airline had operated the route from the US Memorial Day holiday to Labour Day. He said that even as Sun Country became the sixth airline on the pairing, it secured enough demand to fill its aircraft and “significantly lower airfares for customers”.

There is no conclusion to be drawn from Sun Country’s service pattern to Hawaii and the strategy that Frontier will adopt, if it makes the decision to serve Hawaii eventually. But Sun Country could have hit on a niche that other airlines will at least take time to study.

With a range of approximately 4,700nm, Frontier’s new Airbus A321XLR aircraft have the range to reach Europe, but the aircraft also has the ability to penetrate deeper into South America; given the VFR (visiting friends and relatives) traffic patterns in the region, that option could present more opportunity for Frontier, which has a codeshare with the Mexican ULCC Volaris.

Frontier’s fellow ULCC Spirit has been making a push into Latin America and the Caribbean from its second largest base in Orlando, adding 13 new international routes from the airport – largely markets that it already serves from its largest base and headquarters in Fort Lauderdale.

Orlando is Frontier’s second largest base measured by origin, and the airline also serves both Fort Lauderdale and Miami in South Florida. Frontier could possibly benefit from opportunities in that region to add service deeper into South America, especially from Miami, given that it is a hub for American.

New services to Europe would arguably be higher stakes for Frontier. The success of long haul low cost operators is mixed, and most of those airlines have opted to add a premium economy or business class – an expense Frontier is unlikely to undertake.

Frontier is definitely planning to expand its ultra low cost brand coast-to-coast in the US and internationally.

With deliveries of its Airbus A321XLRs more than five years away, the airline has time to study potential markets for its model and its expansion, and it remains to be seen whether Hawaii and Europe will ultimately make the cut.