Oil prices continue to hover above USD75 per barrel as US crude oil stocks continue to decline, with better jobless and trade deficit figures in the US helping to raise crude prices this week. The US Energy Information Administration (EIA) reported a 1.9 million reduction in the crude oil stockpile last week, with distillate and gasoline stocks also declining.

The end of the northern summer marks the end of the "driving period" for the US, and a forecast reduction in gasoline use in the world’s largest energy-consuming nation.

According to EIA’s latest forecast, US GDP is forecast to grow at 2.8% this year, moderating to 2.3% in 2011, although there are still significant upside opportunities and downside risks in that outlook. This is down 0.3% and 0.1%, respectively, from earlier US outlook forecasts. World GDP is expected to increase 3.3%, again a reduction of 0.3% from earlier forecasts.

The "two speed" recovery is expected to continue, with large economies in Asia and the Middle East outstripping the growth of those in Europe and North America. China, nations in the Middle East and Brazil are expected to represent most of the expected growth in world oil consumption in 2011. This week the EIA lowered its estimate for China oil demand growth during 2011 by 30,000 barrels per day (bpd) to 530,000 bpd, with demand expected to average 9.5 million bpd.

The EIA has moderated its outlook for crude oil prices, which averaged just under US77 per barrel over Aug-2010. This is USD3 per barrel under earlier outlooks, mostly due to oil prices dropping by approximately USD9 per barrel in the second week of the month.

Over 4Q2010, West Texas Intermediate crude is expected to maintain that average, increasing to approximately USD83 per barrel over 2011, although there is a high degree of uncertainty in the outlook. EIA’s 95% confidence limit covers a USD33 per barrel spread (USD61-94 per barrel).

Non-OPEC oil supply is now expected to increase to cover some of this shortage, up by 700,000 bpd in 2010. Non-OPEC supplies are expected to tail off by approximately 160,000 bpd in 2011. Declines in North Sea production and lower supply from the CIS and Russia are the primary contributing factors. OPEC forecast that producers outside the organisation will increase supply in 2011 by 360,000 bpd to average 52.42 million per day. 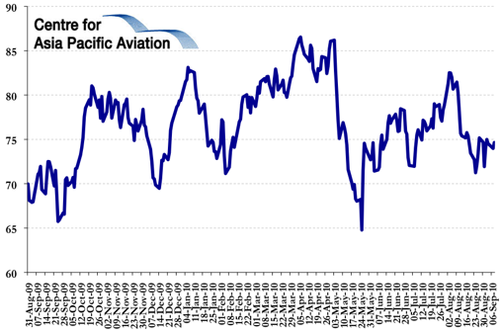 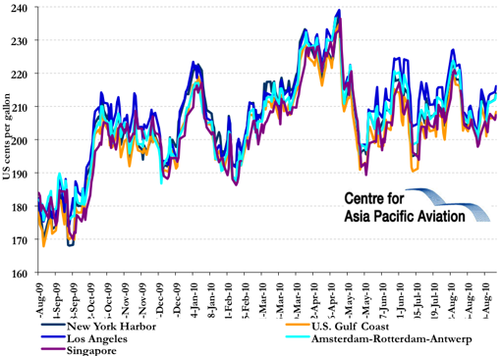