Fraport's shares gained 2.2% yesterday as the company's executive board stated it would recommend to the supervisory board that the 2010 dividend be raised from EUR1.15 to EUR1.25 for the annual general meeting (AGM) on 01-Jun-2011.

The company noted that after tax profit will improve for full year 2010, increasing to about EUR270 million from EUR152.0 million in 2009. The increase includes EUR80 million received from the release of provisions - in connection with an audit for 1999 to 2002.

The release of provisions adds to the "overall picture of strengthening profitability for the current business year", according to the company, citing a noticeable recovery in traffic volumes at Frankfurt Airport. At the same, the Group's external business is enjoying a steady upsurge. Fraport AG's international investments now account for 20% of total revenue but generate some 30% of the company's EBITDA.

The executive board expects ongoing air traffic growth at the company's Frankfurt Airport home base in the coming years. Construction of the new Runway Northwest is fully on schedule for inauguration in Oct-2011 at the beginning of the Winter Timetable 2011/2012.

"All of this is proof positive that Fraport AG is well on track and excellently positioned to master the challenges ahead," stated Fraport executive board chairman Dr Stefan Schulte. Preliminary figures for the 2010 financial year will be presented on 11-Mar-2011.

Elsewhere, Thai stocks continued to fall heavily yesterday, due to concerns over a resumption of political instability in the country. Airports of Thailand shed a further 5.6% to THB33.50 - the lowest level since Jun-2010. 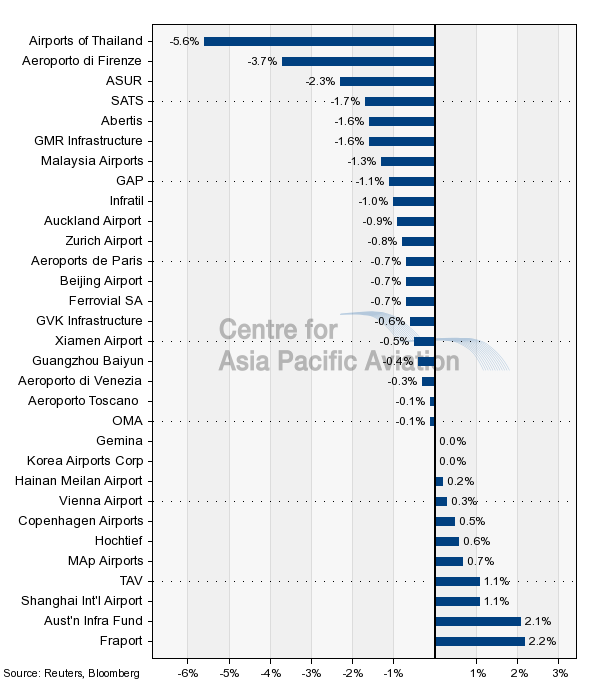