CAPA has posed a question in recent weeks: is it time that operators of and investors in airports re-evaluate those enterprises in the light of global events? Fraport certainly did that in the case of its investment in the operator of St Petersburg Pulkovo Airport in Russia.

Now Fraport has announced that it will quit an investment in Xi'an Airport in China too, one of very few foreign ventures by anyone into the Chinese air transport industry that remain, and it has already found a local buyer.

The reasons given on this occasion relate to a perceived lack of opportunities to make more investments in the country, which is certainly the case. CAPA’s analysis indicates that Xi'an is hardly a ‘Question Mark’ in Boston-Box terminology, let alone a ‘Dog’.

At the same time, it seems implausible that worsening political relations globally had no impact on the decision.

After leaving its Russian investment, Fraport moves on to end its Chinese one

In two recent CAPA articles the way global politics has increasingly had an impact on airport ownership and management has been examined.

In Ukraine invasion: Fraport exits St Petersburg Pulkovo Airport. Alarms sound for airport investors it was reported how Fraport, one of the world’s most significant investors in and managers of airports, had decided to call a “halt” to its business in Saint Petersburg, Russia.

The company has held a 25% share in Northern Capital Gateway, which operates the Pulkovo airport there, since 2009. While the precise meaning of ‘calling a halt’ could not be established, the strong words of Fraport's CEO suggested that the company is distancing itself from the consortium for the long term and that if it can find a buyer for its stake (assuming it is permitted to sell the stake; there is some doubt about that).

That article also mentioned that Fraport is also represented at Xian in China, where it is one of very few foreign, western, investors in airports and their supporting structure. Fraport has held a 24.5% stake in the Xian Xianyang International Airport since 2008 (a year before the St Petersburg deal). There it engages in the operation of dedicated landside infrastructure elements (terminals, parking facilities, administration buildings, fire service facilities, medical and other facilities) and the associated land properties, as well as the management of the terminals, including responsibility for the commercial areas.

In a separate article, Pandemic hurts Beijing Capital Airport finances, complicated by politics, (and also a subsequent one on Hong Kong), the continuing impact of the pandemic on China was brought into focus.

It is possible it could take another year again before anything like normality is restored there.

So where Fraport’s investments to the north and east of Germany are concerned (St Petersburg and Xian are the only ones, apart from Antalya and Delhi), the factors affecting those investments include the continuation of pandemic measures in China and the Russian invasion of Ukraine – both of which are known 'knowns’ – and two are 'unknowns'. 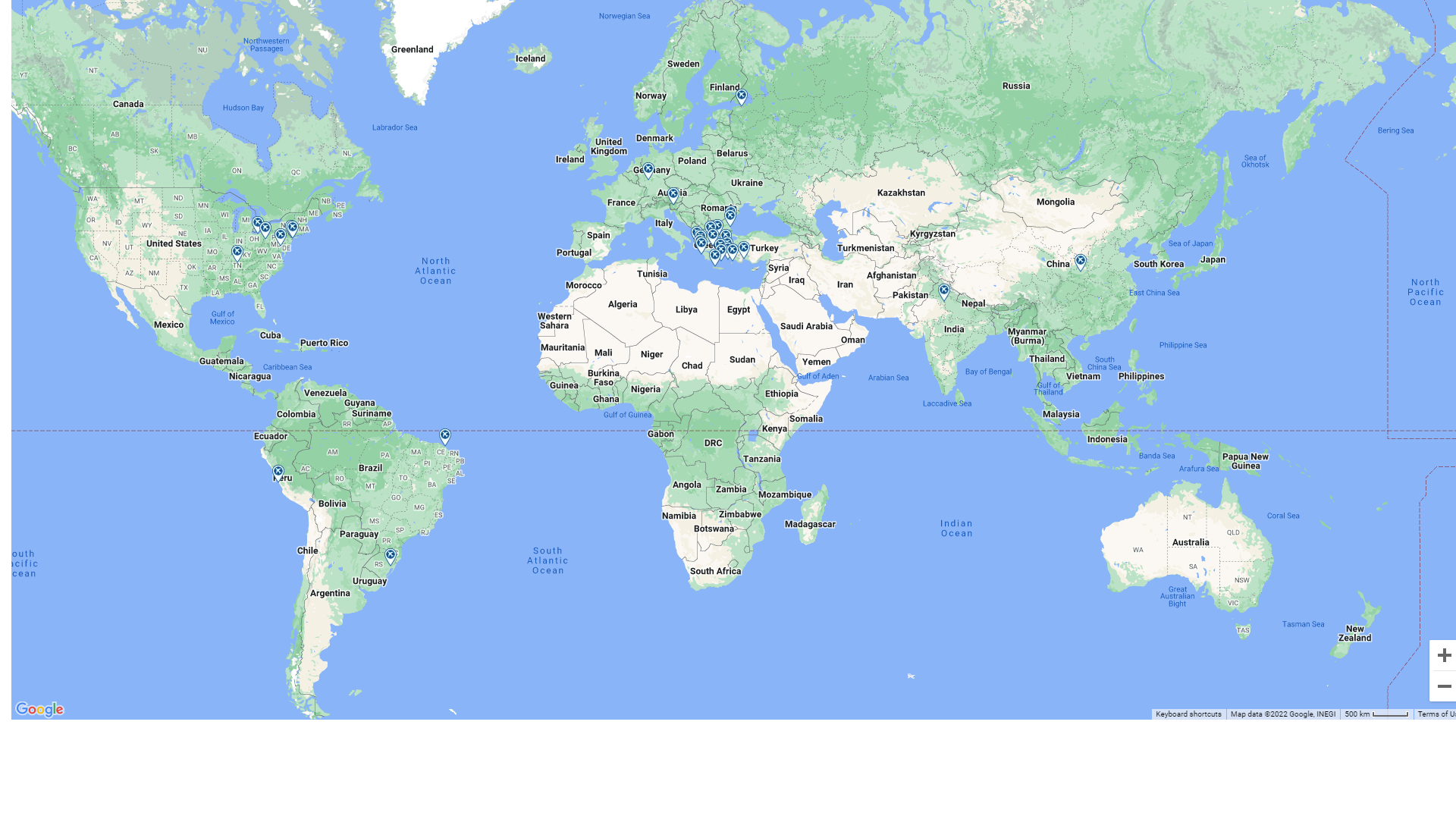 They are, firstly, the potential for China to opt to support Russia in its (increasingly indeterminate) aims concerning Ukraine.

The Chinese President Xi Jinping has a contracting window of opportunity to make a decision one way or another, and may have done so by the time this article is published.

If he did, that would likely entail the rapid imposition of sanctions on China by the United States and others and the beginning of a very clear east/west demarcation in the world.

The other unknown is whether or not China will invade Taiwan. In the light of Russia’s mauling at the hands of the supposedly inferior Ukrainian armed forces and civilians, President Xi is probably revisiting whatever determinations he might have previously made as a matter of urgency.

But if he did invade that country the economic outlook for everyone would worsen dramatically.

It is for those reasons that the article on St Petersburg concluded that “every airport investor must by now be putting every investment under the microscope”, adding “Could Fraport seek to offload its foreign investments and retrench to Frankfurt, or just cut its losses where it perceives there could be other problems in the future? Might others follow suit?”

So in some ways it is not a surprise that on the last day of Mar-2022 Fraport announced plans to sell its 24.5% stake in Xi'an Xianyang International Airport to Chang'An Huitong Corporation Ltd for CNY1.11 billion (USD175.1 million). However, the reasons given in this instance are more concrete.

Fraport CEO Stefan Schulte stated: "We reflect on our activity in Xi'an with great satisfaction, but also some disappointment", adding, "Over the past 14 years, Fraport successfully developed Xi'an from a medium-sized regional airport with about 10 million passengers annually to one of China's largest aviation gateways, serving more than 40 million passengers per year".

Dr Schulte further noted: "On the other hand, we always regarded our minority stake in Xi'an as a starting point for expanding our business in China... However, this never materialised in Xian or at any other Chinese airport. Consequently, we have now decided to cease our activities in the Chinese market."

Fraport expects to finalise and conclude the stake sale transaction in 2Q2022.

Not the first to pull out, but will be the last, for now

Several companies have had their eyes on the bigger prize in China having started small, including Groupe ADP (when it was Aéroports de Paris), VINCI Airports, and Copenhagen Airports; but all of them pulled out. BAA plc never showed more than a passing interest, even though Hong Kong was still a British colony when it was at the height of its foreign investment period.

Even Singapore’s Changi Airports International, which is dedicated mainly to the Asia Pacific region in its activities, has not been hammering on China’s door for investment opportunities.

And the Chinese government has not been conducive to foreign investment in this sector during the past decade either.

Xi'an had been a solid performer for Fraport…

Regarding the airport’s growth, Dr Schulte is accurate in saying that Xi'an has become a major gateway during Fraport’s tenure. In 2019 it was the seventh busiest airport in Chine with 47.2 million passengers.

The chart below chronicles the airport’s growth in terms of passenger numbers from 2008, when Fraport made its investment, until 2022. From 2008 until 2017 there was double-digit growth in every year, at an average of 15.1%.

That is a superior rate of growth to what was recorded at China’s airports aggregated, which was +12.5%.

Riding the pandemic better than most airports until recently

The chart also reveals the remarkable way in which Xi'an has been able to ride the worst shocks of the pandemic, losing only 34% of its passengers in 2020 and experiencing a revival in 2021, to just -2.9%.

In the first two months of 2022, though, passenger numbers have fallen by 63.1% as Xi'an falls victim to another assault from COVID-19. The city was under a strict lockdown from 22-Dec-2021 to 24-Jan-2022, with some of the sternest measures introduced anywhere.

Accordingly, the airport has experienced the lowest levels of seat capacity in the first two months of 2022 for the entire duration of the pandemic, reducing to 251,000 seats in the week commencing 10-Jan-2022. The relaxation of restrictions, though, means that those levels have climbed dramatically to almost the highest level seen during the past four years, at 1.05 million, a figure that is even higher than 2019’s. 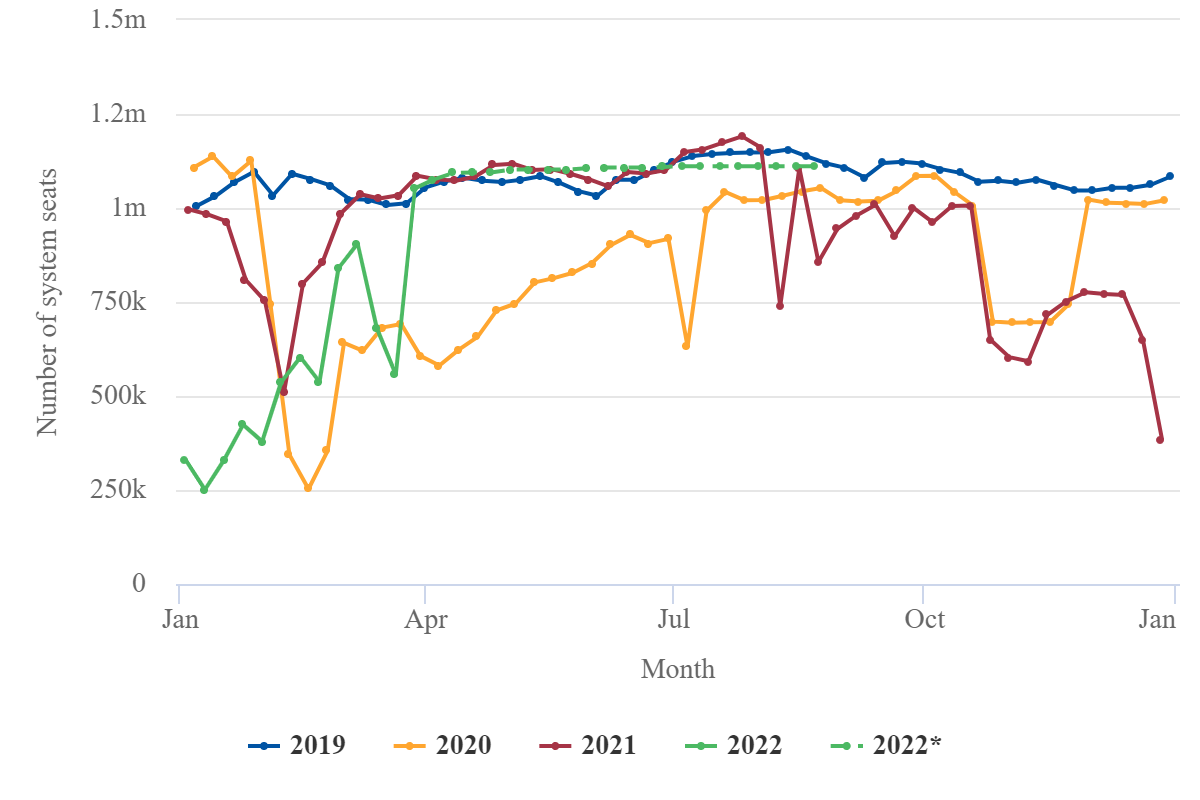 The airport is yet to recoup its international services; they account for only 0.2% of capacity presently and only 0.1% of capacity is on foreign airlines.

China Eastern Airlines is the leading airline, with 34.1% of seat capacity and 37.6% of movements. China Eastern is currently in a difficult position following the recent unexplained fatal crash of one of its 737-800s, but it is highly unlikely that is a contributing factor to Fraport’s decision.

Xi'an lacks low cost traffic. Capacity on LCCs is only 7.4% compared to 14.6% in China as a whole. Capacity at XIAN is 51% ‘unaligned’, which is a little less than for the whole country.

On most days the airport is consistent in its utilisation, with arriving and departing activity in each of the hours it is open (all except 0200:0600).

Xi'an worth holding onto, in many ways

So there is a mixed bag of economic indicators.

The most significant one is the steady growth over years that Xi'an had experienced in the passenger segment, and that was augmented by similarly strong growth in the cargo segment, notably in 2018 and 2019 (+20.3% and +22.1% volume respectively). There was even growth in 2021 (+5.1% volume).

Most analysts would conclude that on those figures it is worth Fraport’s while to hold on to Xi'an, but if that airport was intended to be a launch pad to bigger things, perhaps in Beijing, Shanghai or Guangzhou for example, then that has not happened – nor is it likely to happen now.

When that realisation is added to the prospect that China could join Russia as an investment pariah on the world stage, then Fraport’s call on this matter looks to be the right one.

The purchasing company, Chang'An Huitong Co., Ltd., is located in Xi'an and is part of the 'Other Investment Pools and Funds' industry – a group comprising legal entities (i.e. investment pools and/or funds) organised to pool securities or other assets (except insurance and employee benefit funds) on behalf of shareholders, unit holders, or beneficiaries. There are four companies in the Chang'An Huitong Co., Ltd. corporate family.

As such, it should be seen as an investor rather than as an operator, and it has no direct prior experience of the airport sector that is known to CAPA.