Traffic results last month at Fraport and BAA show signs of a gradual stabilisation in traffic at the key European airports of London Heathrow and Frankfurt, both in terms of passenger and cargo segments. However, a sustainable recovery is not yet guaranteed.

Fraport optimistic that the decline has bottomed out, upwardly revised full year forecast

Frankfurt Airport's traffic results continued to head back towards positive territory in Aug-2009, with the airport experiencing a just 0.4% contraction to 4.9 million passengers, although traffic was down around 4% last August.

Fraport Executive Board Chairman, Dr Stefan Schulte, stated he is optimistic that the decline has bottomed out, stating, “from month to month, the traffic decline is lessening". He added, "in the passenger segment, we have almost reached the previous year's level during August 2009 – especially because of the base-year effect from the weakening economy in the second half of 2008”.

Dr Schulte declared, "we have a good chance of ending the year with a passenger decline of only 5-6%. Up to now, we had been expecting 6-9% fewer passengers than in the previous year."

Frankfurt Airport experienced a 5.0% reduction in cargo volume in Aug-2009, an improvement from a cumulative reduction of 18.0% in 2009. 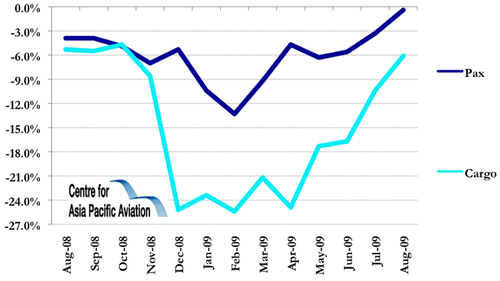 By contrast, Heathrow Airport handled 6.4 million passengers in Aug-2009, a 0.3% year-on-year increase, and the busiest August ever for the airport, fuelled by a “strong leisure market and Heathrow’s powerful network of international routes”.

According to BAA, the airport’s Aug-2009 figures, which follows on from “good” performance in Jul-2009, “suggest that people are cutting back on leisure travel less than Business travel”.

However, BAA cautioned that a continuation of the improving trend at Heathrow “depends on Business travellers re-establishing face-to-face contact with global markets." 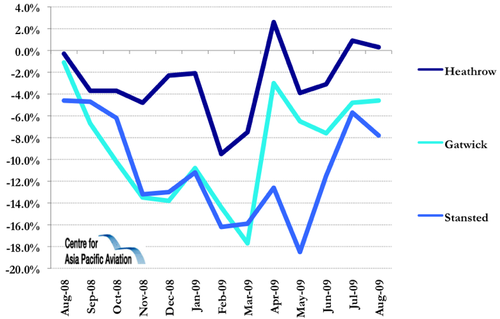 However, it was not all positive news for BAA, with the Group’s results remaining “mixed”. Combined traffic among BAA’s seven UK airports saw a 3.1% reduction in total passengers to 14.4 million in the month, with BAA CEO, Colin Matthews, warning that “industry conditions remain difficult”.

Specifically, London Stansted experienced a 7.8% passenger reduction, largely due to airline capacity reductions. London Gatwick’s performance however showed signs of improvement, being the only airport to grow its domestic market (+1.2%), with scheduled traffic also up by 5.6%, although overall traffic was down 4.6%.

In Scotland, Edinburgh Airport experienced a fifth consecutive month of passenger number growth (+4.8% year-on-year in Aug-2009), fuelled by new low-cost scheduled services to Europe, and to become the only Scottish Airport to experienced passenger growth.

“Signs of a revival” in European scheduled traffic

By region, BAA stated that there were "again signs of a revival in European Scheduled traffic,” which increased 0.4% in the period, with long haul traffic, excluding North Atlantic, up by 4.0%. North Atlantic traffic remained weak with a 7.7% reduction, with domestic traffic also weaker, down 5.9%.

BAA’s Aug-2009 reduction in cargo volume (-7.5%) marked the first time since Nov-2008 that the decrease has been in single figures.

This figure was boosted by strong cargo growth in Scotland (+89.9%), driven by a 228.9% increase at Edinburgh. London area cargo, however, remained weak, particularly at London Gatwick (-19.1%). Heathrow volumes were down 8.4%. 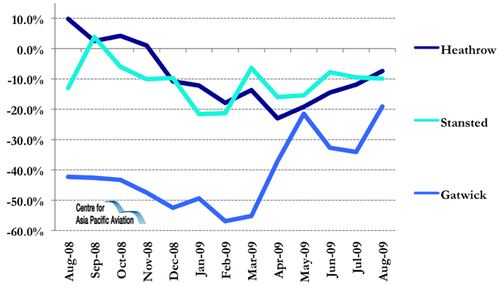