Shares in airports worldwide ended the week on a high last Friday, with Zurich Airport leading the way, rising 7.5%.

Shares in German airport operator, Fraport, gained 3.1% on Friday, following approval from the Hesse Adminstrative High Court for Fraport to proceed with a EUR4 billion expansion at Frankfurt International Airport (see below). The expansion plan, which includes a fourth runway, a third terminal and a cargo and maintenance base, is expected to increase Frankfurt International Airport’s capacity to 88.6 million passengers p/a by 2020. 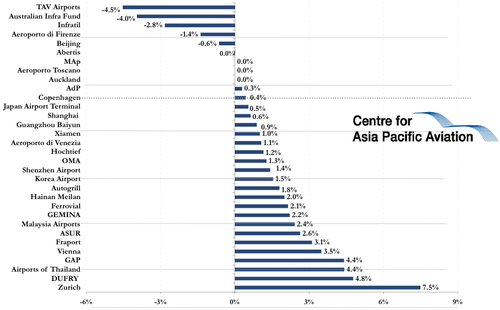 Fraport AG described the decision from the Hesse Adminstrative High Court (VGH) in Kassel "a great day for the German air transportation industry and the future of the Frankfurt/Rhine-Main region".

In an initial statement, Fraport Executive Board Chairman, Dr. Wilhelm Bender, stated the VGH decision stressed the overwhelming public interest in the expansion of Germany's central air transportation hub, adding the expansion of Frankfurt Airport (FRA) is not only a national task for securing the future viability and competitiveness of Germany as a strong aviation base but will also guarantee the economic prosperity of the Frankfurt/Rhine-Main region, which is strongly affected by the current economic and financial crisis.

Bender underscored that Fraport was "fully on schedule" with airport capacity expansion and that the envisaged opening of the new Runway Northwest for the 2011 Winter Timetable was a "realistic target".

Fraport's Executive Board Vice-Chairman, Dr. Stefan Schulte, responsible for airport expansion, commented on the court's decision regarding nighttime flights, by pointing out that the court had attached more importance to the residents' need for an undisturbed nighttime sleep than to the competitive interests of the airlines. With its request for a nighttime flight ban between 23:00 and 05:00 in the zoning application, Fraport followed the recommendations of the mediation group. After weighing the interests of air transport on the one hand and the residents' need for protection on the other hand, the zoning authority permitted 17 aircraft movements during the night. This would be considerably less than the 40 nighttime flights currently registered on average. Furthermore, to balance interests the authority had included in its consideration other court decisions.

Dr Schulte stated "ultimately, the issue will presumably be decided at the highest court level."

Bender and his successor, Schulte, both called on the airport neighborhood communities to carry on reasonable and fair dialog. In the interests of citizens, the issue was for example to develop noise-reduction procedures, as currently worked out in the Airport and Region Forum with the active participation of Fraport. The air transport industry has committed itself to this sustainable goal and will continue its intensive efforts to reduce noise: directly at the aircraft, during approach and takeoff, as well as on the ground, and through runway allocation.

In conclusion, the Fraport Executives pointed out that the company, on its own accord, has already started reforestation before the Kassel court's decision. Thus, more than 40,000 trees and shrubs have been planted so far.