Fraport has declared its interest in bidding for at least three Greenfield airport projects in India. Several new airport projects will be launched in 2010/11, with high-profile projects including Navi-Mumbai, Pune, Goa and a few smaller airports in Punjab.

Fraport already owns a 10% stake in the Delhi International Airport (DIAL) consortium and is keen to partner again for the upcoming contracts. Local players include Reliance ADAG, Lanco and L&T, as well as GMR and GVK. The latter has recently been expanding its stake in Mumbai Airport and is keen to play a bigger role in airport development projects across India.

Fraport also faces competition from foreign rivals including Changi Airports International (which has a partnership with Tata, and owns a 26% stake in the Greenfield Durgapur Airport project) and Malaysia Airports, which owns a stake in Hyderabad Airport (11%) and a small stake Delhi through its retailing division. Turkey’s TAV has also looked at Indian airport opportunities in the past.

On the other hand, Zurich Airport has recently reduced its stake in the Bangalore Airport consortium from 17% to 5%, but retains the airport management contract.

Zurich Airport’s shares rose 0.5% on Friday, while Fraport’s shares gained 0.2% and TAV slid 0.9%. Malaysia Airports’ shares did not trade on Friday, due to a public holiday. 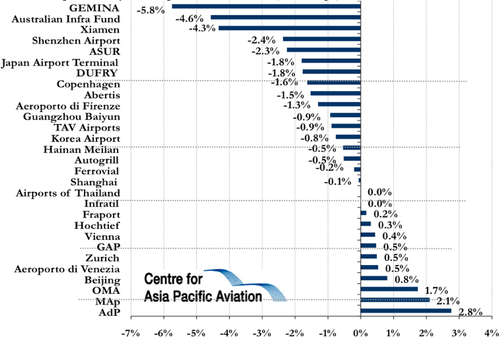