The Association of Asia Pacific Airlines (AAPA) announced the Asia Pacific full service airlines have been seeing “some tentative signs of a recovery” in traffic volumes in recent months, but yields have remained “severely depressed” after over 12 months of declining trade volumes, diminished consumer confidence and weak passenger and cargo demand.

Director General, Andrew Herdman, added that, as a result, “Asian airlines as a group are expected to record another year of heavy losses, on top of the USD4.8 billion of losses suffered in 2008”, as airlines continue to take a “double hit” from both declining traffic and lower yields.

AAPA members carried a total of 11.1 million international passengers in Oct-2009, a 3.2% year-on-year contraction, for 16 consecutive months of contractions. 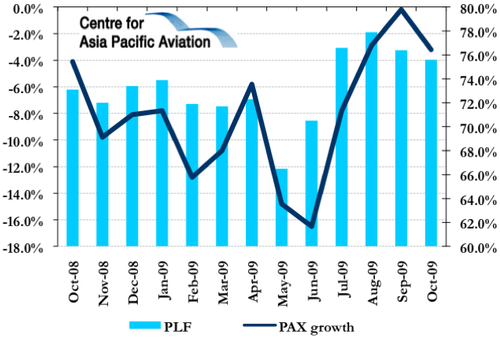 Of particular concern is that much of this reduced demand is in the premium sector, with the sharp downturn in premium passenger services being “particularly painful” for the region’.

Meanwhile, AAPA member carriers experienced 2.8 ppt improvement in international passenger load factors (76.4%), as the carriers’ reduced capacity (ASKs) by 6.5% in the month. This is the third consecutive monthly improvement in load factor for AAPA carriers.

… and 13 months of capacity reductions

AAPA member airlines have been reducing international capacity now for 13 consecutive months, with a peak reduction of 9.2% in Jun-2009, with Oct-2009’s 6.5% contractions compounding off a 1.2% contraction in Oct-2008. 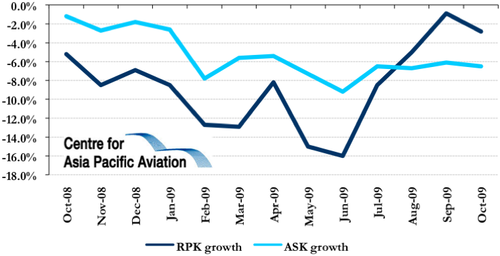 Air cargo traffic, meanwhile, maintained its trend of a “slow but steady” improvement in Oct-2009, according to AAPA, following a dramatic reduction in aircraft utilisation in 4Q2008 and Asian carriers beginning the year 30% down in freight tonnage terms.

In Oct-2009, AAPA international freight tonne kilometers (FTKs) were down 2.4%, for the smallest shortfall of the past 17 months, and for an improvement from a contraction of 6.5% in the previous month. The accumulate decline in the ten months to Oct-2009 remains in the double-digits, down 16.5%. The average international cargo load factor rose 4.2 ppts to 69.1% in the month, as carriers’ cut capacity by 8.3%. 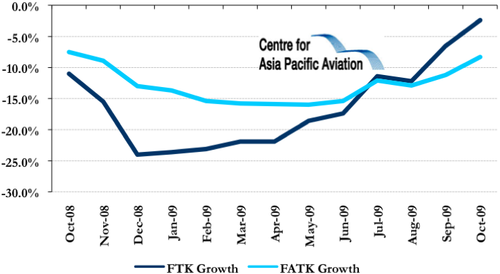 In attempting to navigate their way through the current crisis, Asia Pacific airlines have been cutting capacity, “aggressively” reducing costs and discounting fares to stimulate demand in a weak demand environment. However, while this strategy has had some success in stimulating demand, it has also placed considerable pressure on yields, resulting in lower revenues and heavy losses for most carriers in the region.

AAPA warned that airlines in the region “remain under pressure, with the industry still reeling from the impact of the global recession. The association added that carriers remain “unsure whether signs of a fragile recovery in passenger and cargo traffic volumes will prove to be sustainable”.