Formerly high flying Boeing and Airbus have secured a grand total of just four new aircraft orders between them in the first three months of 2009, net of cancellations. It is one of the starkest reminders of the effects of the global economic downturn on the aviation industry.

The world's airlines have ordered a total of just 50 aircraft in the first quarter (28 for Boeing, 22 for Airbus), but they have cancelled 46 (32 for Boeing, 14 for Airbus), for a net order gain of just four aircraft. 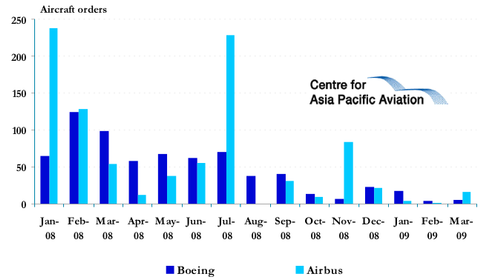 No downturn in deliveries

Neither manufacturer has disclosed how many aircraft deliveries have been deferred, but numerous airlines and lessors have been scrambling to defer deliveries where they can, and where financial penalties are not punitive. Most of the deferrals could be for 2010 deliveries and beyond, as customers have to pay heavy penalties to cancel near-term deliveries.

As a consequence, deliveries are holding up this year. Boeing and Airbus have delivered 237 aircraft to the world's beleaguered airlines and lessors in the first quarter (Boeing: 121 and Airbus: 116) - one less than the same period last year (Boeing: 115 and Airbus: 123). 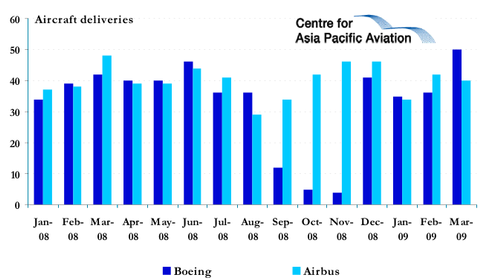 Both manufacturers will be calibrating their production lines to closely match deferrals and to protect aircraft values. Already Airbus has announced reductions to its narrowbody output.

Boeing and Airbus are also mindful that it is highly probable they could end 2009 with negative orders (ie cancellations outnumbering orders), if the global economic downturn worsens. 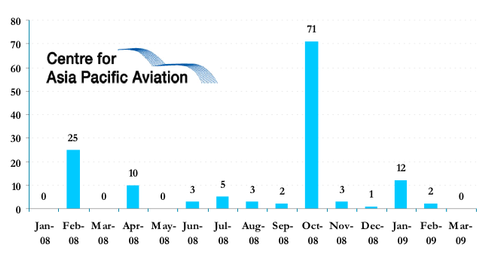 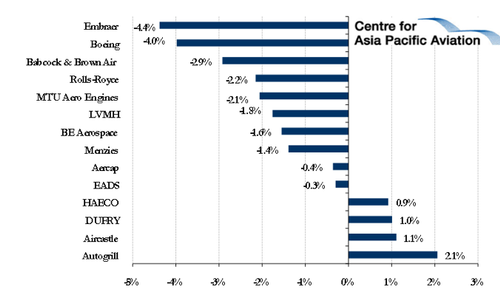