The airport sits in a unique position of being a focus city for a large US hybrid airline, JetBlue, and the headquarters and top base for the country’s largest ULCC Spirit Airlines. Fort Lauderdale also has representation from ULCCs Allegiant and Frontier and counts Southwest Airlines as its second largest airline measured by ASKs deployed.

With overall US domestic demand holding steady, Fort Lauderdale’s prospects for 2015 remain strong, underpinned by a new runway that opened in late 2014 that should both allow for less congestion and future growth. But the airport also faces some challenges with its growth, namely bottlenecks in customs processing.

Fort Lauderdale processed roughly 24.6 million passengers in 2014, up 4.6% from the year prior. Its international passenger numbers jumped 26% to approximately 4.7 million. The airport’s passenger growth should remain on a steady trajectory in 2015 as airlines continue to expand from Fort Lauderdale. 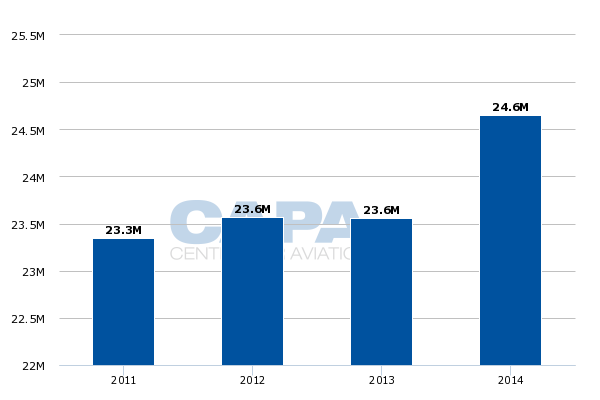 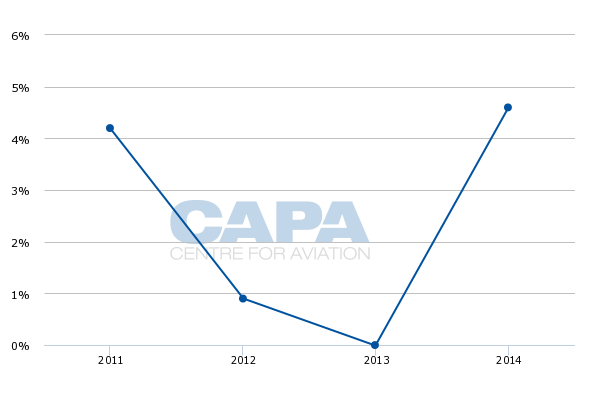 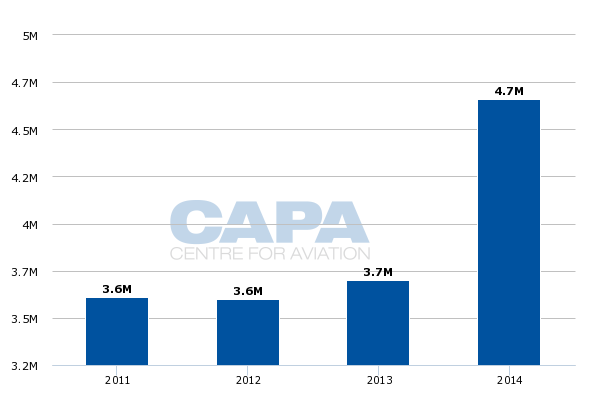 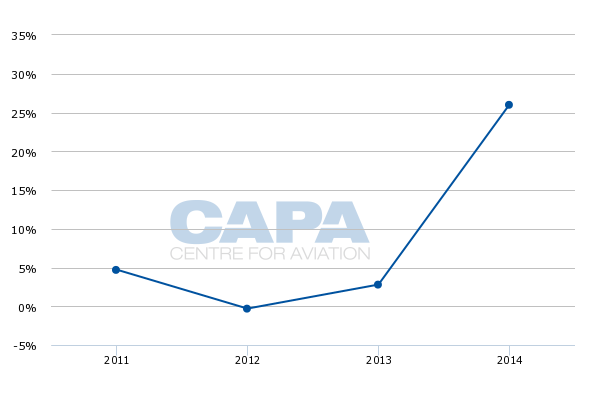 Among the foreign airlines that launched service from Fort Lauderdale in 2014 were Azul from its hub at Sao Paulo alternative airport Campinas, Copa from its Panama City Tocumen hub, Norweigan from London Gatwick, Ecuador’s Tame from Quito and Guayaquil and Volaris from Mexico City and Guadalajara. International passenger levels should continue to grow in 2015 as these routes mature.

Data from CAPA and OAG for the week commencing 23-Mar-2015 to show that roughly 26% of Fort Lauderdale’s ASMs are deployed into international markets. 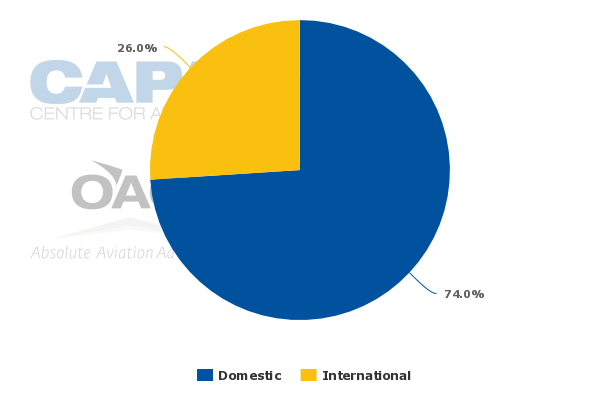 JetBlue, which is Fort Lauderdale’s largest airline measured by ASMs (based on schedules for the week commencing 23-Mar-2015), also expanded its international offerings in 2014 with the addition of Montego Bay, Port of Spain, Punta Cana and Cartagena. The airport is a strong O&D market, fuelled by the large pool of VFR passengers from South Florida.

But JetBlue also leverages Fort Lauderdale as a connection point for north-south US traffic flows. Its addition of service to Pittsburgh during 2014 reflects its aim of flowing at least some passengers over Fort Lauderdale to its Caribbean and Latin American destinations.

The jump in Fort Lauderdale’s international passengers does create some challenges for the airport – notably in resources for processing passengers through US customs. News outlet the Sun Sentinel in late 2014 cited US Customs and Border Protection data that showed the number of passengers waiting at least one hour to clear customs grew from 50,764 in 2012 to 127,863 in the first nine months of 2014. The maximum wait time increased from 1.7 hours in 2012 to 3.4 hours in 2014.

The publication highlighted steps the airport is taking to combat the logjams, including asking airlines to reschedule some flights and the purchase of automated passport kiosks. Terminal four at Fort Lauderdale is also being revamped with a larger Customs area, the paper stated, and Terminal one is due to gain another Customs area. Those projects are set for completion by 2017.

Fort Lauderdale is in somewhat of a unique position. Its largest airlines are hybrids JetBlue and Southwest and ULCC Spirit.

JetBlue is the largest airline serving the airport measured by total ASMs, while Southwest has the largest share of domestic ASMs.

Air Canada is the largest international carrier at Fort Lauderdale, based on ASMs for the week commencing 23-Mar-2015. The airline presently serves Fort Lauderdale from its hubs in Toronto as well as Halifax and Ottawa. 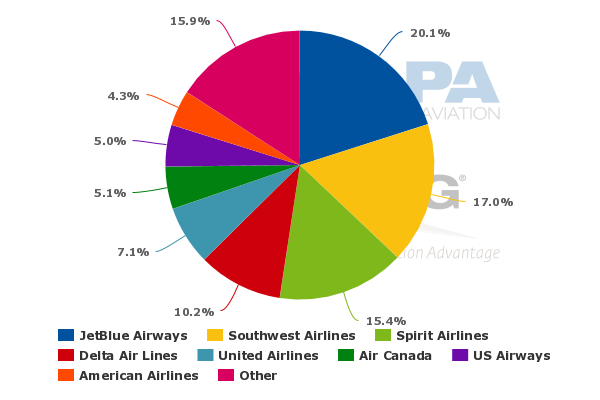 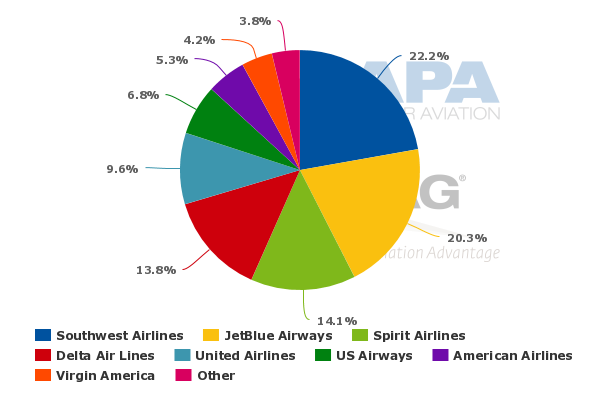 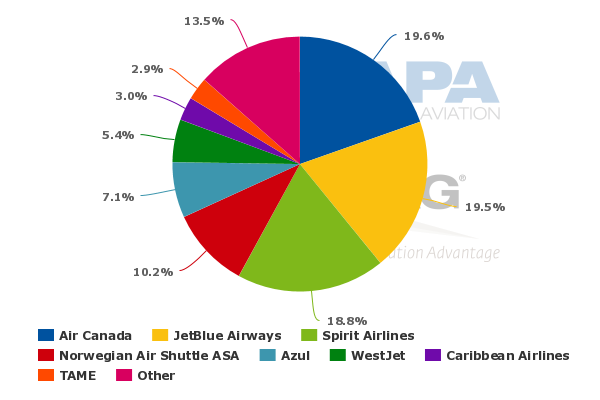 All the main US network airlines – American, US Airways, United and Delta – also operate from the airport. Those four airlines also serve nearby Miami, which is American’s major gateway to Latin America. The use of both airports by these airlines and others shows there is enough demand to serve both airports as some passengers in some cases do not wish to make the 39km drive to Miami, or pay the higher fares that legacy airlines can sometimes garner in Miami.

It seems like an odd bifurcation, but Frontier also operates from both Washington Dulles and Washington National. Frontier has also opted to add flights from Miami after Spirit in 2014 reportedly evaluated launching flights from Miami, so perhaps the idea of a ULCC serving Miami is not totally illogical.

Even as Miami may draw some ULCC interest, Fort Lauderdale’s competitive cost remain one of the biggest draws the airport has to offer.  A report in the Miami Herald in late 2014 stated that Fort Lauderdale’s cost per enplaned passenger for fiscal 2013 was USD4.16, which should rise to USD6.51 in 2017 as the airport completes certain upgrade projects. But the paper stated the cost should drop after that time.

The cost benefit, along with South Florida’s built-in VFR passenger base, gives Fort Lauderdale a potentially brighter outlook than other airports attempting to define themselves in the post-consolidated US industry. JetBlue has repeatedly stated its intent to operate 100 daily flights from Fort Lauderdale by 2017, and the airport is one of the airline’s fastest growing markets. Southwest’s potential international service also gives the airport some certainty about growth that other US airports do not enjoy.

Leveraging its geographical position as a gateway to the Caribbean and Latin America and keeping passenger enplanement costs lower than other airports should allow Fort Lauderdale to keep recording steady passenger growth during the next couple of years as it works to retain its competitive advantage for the long-term.