FlyGeorgia launched operations last month, emerging as the main competitor to flag carrier Georgian Airways. The new airline quickly expanded into the international market after launching domestically and is now connecting Tbilisi with Turkey and Iran. The launch of a second major carrier for Georgia comes as the country’s aviation market continues to grow with over 10 new routes connecting the country with other cities across Europe. The presence of low-cost carriers is also increasing with the expansion of Pegasus’ services to the nation and entry of Wizz Air to the market.

Based at Tbilisi International Airport, Fly Georgia currently operates one leased A319 aircraft in a two-class configuration. FlyGeorgia’s first service to be launched was Georgian domestic trunk route Tbilisi-Batumi on 03-Aug-2012. FlyGeorgia made its debut in the international market with twice weekly services from Tbilisi to Antalya (Turkey) and Tehran (Iran) on 28-Aug-2012. FlyGeorgia is targeting routes already served by other carriers with the exception of Tbilisi-Antalya.

FlyGeorgia increased Tbilisi-Batumi frequency from twice weekly to daily on 30-Aug-2012, becoming the leading carrier domestically in Georgia, overtaking national carrier Georgian Airways. This isn’t a huge feat however as Georgia’s aviation market is primarily international with only approximately 5% of total scheduled capacity attributed to the domestic market, according to Innovata data. 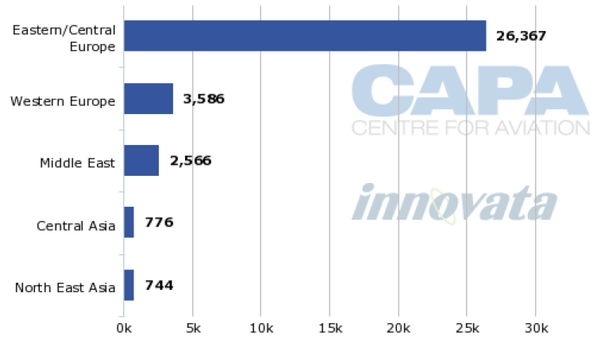 FlyGeorgia plans to operate to destinations in Europe, the Middle East, CIS, central and south Asia. In late 2012 the airline plans to launch services to Amsterdam, Kiev and Minsk.

Kiev and Minsk are among the top 10 international routes from Tbilisi. Tbilisi-Amsterdam is also already operated by Georgian Airways so FlyGeorgia will be facing competition on all its new routes.

This expansion will require extra aircraft in addition to its one existing A319. In Jun-2012 it was reported the airline would initially operate two leased A319s but FlyGeorgia ended up launching with just one A319 there have not yet been any announcements about sourcing the second aircraft. 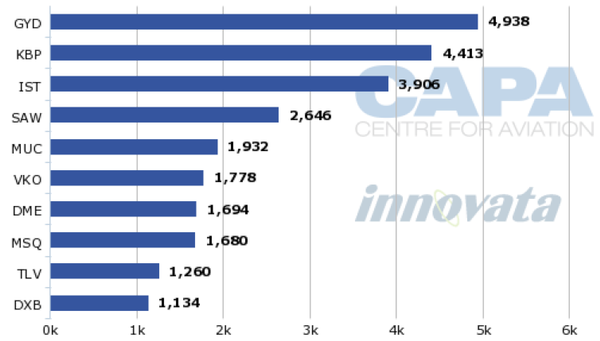 The airline has not detailed how many frequencies it will initially operate on the new routes, though FlyGeorgia is expected to operate them at least twice weekly each, given its initial network frequencies. The expansion could see FlyGeorgia double its total capacity, which is currently about 800 weekly seats. 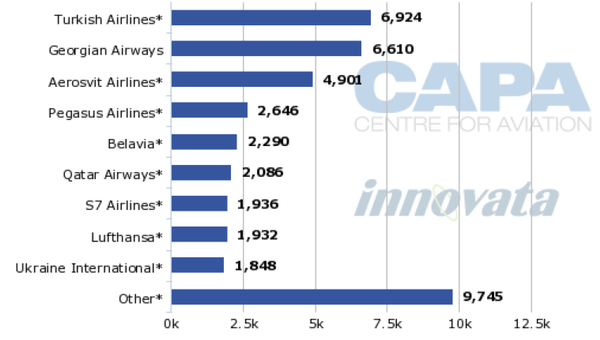 Meanwhile, Georgia’s aviation market continues to grow with the help of existing carriers, with 11 new routes launched (or to be launched) to the country from across Europe in 2012. Two of these new routes see the expansion of Georgia’s low-cost market with the introduction of Wizz Air and the launch of Pegasus’ second route to Georgia. Georgia’s current low-cost carrier penetration rate is about 12%.

Pegasus in Oct-2012 will begin service to the Georgian Black Sea resort of Batumi from its hub at Istanbul Sabiha Goken Airport. Pegasus already serves Tbilisi.

Pegasus will be only the fourth foreign carrier at Batumi, following Turkish Airlines, Ukrainian carrier Aerosvit and Russian carriers Belavia and S7. Georgian Airways also operates a handful of international routes from Batumi including to Kiev, Moscow, Odessa, Tehran and Tel Aviv, according to Innovata.  FlyGeorgia currently does not operate any international routes from Batumi.

The launch and planned expansion of FlyGeorgia is extending Georgia’s local aviation industry and resulting in a significant increase in the country’s capacity albeit from a small base. Georgia has a seen a number of new routes throughout 2012 from both local and foreign carriers, further expanding the country’s links with the rest of Europe as well as increasing the presence of low-cost carriers. Further developments are yet to come in 2012 with the launch of Air Caucasus in Oct-2012 and further expansion by FlyGeorgia and other carriers.