For all of its strengths, one market the global powerhouse Emirates does not facilitate well is intra-Gulf travel. It may have about half of the Dubai-Jeddah market, for example, but a passenger wanting to travel in the six hour period between 10:25 and 16:15 will be found wanting. Emirates concentrates capacity on routes conducive to its global network, so a 777-300ER departs Dubai at 01:55 and arrives in Jeddah at 03:40. Competitors offer higher frequency, partially facilitated by having narrowbody aircraft, which Emirates does not. But such flights on competitors can be a challenge for profitability.

The solution for Emirates' shareholders was the hybrid LCC flydubai. Run independently of Emirates, flydubai has numerous flights within an hour of Emirates. Yet flydubai has carved its own niche, not only serving routes Emirates does not (largely due to the latter's widebody-only fleet), but interlining with Emirates in a hybrid move that enhances both carriers' networks.

The ties with Emirates, and flydubai's overall hybridity, will be enhanced now that the carrier will add to its previous all-economy configuration a business class – with warm meals and soon a lounge. No doubt there is demand for a premium product in thin but high value routes, as well as those fed from Emirates.

flydubai's all-737-800 fleet has been in an all-economy configuration seating 189 – the certified maximum. In Aug-2013 flydubai will take its first aircraft with a business cabin and that month open sales for business class on unspecified routes. The first business class flight will be in Oct-2013 and flydubai says the product will be available on "most" routes.

Business class seats and service are a good fit for flydubai. flydubai will only say that the product is in response to customer needs. flydubai does operate in the wealthy Gulf region, and even if it is a LCC, on many routes it operates it is likely to be the only carrier recognised to large swathes of the market, creating confidence. And with the Emirates partnership, flydubai can better accommodate Emirates' premium passengers.

Also a factor in the decision would have been how to maximise revenue. flydubai reported on 13-Feb-2013 a net profit of AED152 million (USD41 million) for 2012 on AED2,778 million (USD756 million) in revenues, giving an EBITDAR operating profit margin of a staggering 24%. flydubai's strategy has been yield over load factor. While the carrier does not release traffic statistics, it did say it carried 5.1 million passengers in 2012. Based on capacity data from OAG, this would mean flydubai achieved a 62% load factor (117 seats on the 737-800).

If flydubai was content with its balance between yield and load factor, it was not going to find further growth in the economy cabin. So taking about 24 economy seats that would otherwise on average have gone unsold and replacing them with a new product that reaches to a new segment, creating new revenue streams, makes even further sense for the airline.

flydubai's business class is more than a seat

At a time the definition of short-haul business class is changing, flydubai has opted for the historical norm: wide seats (width unspecified) in leather featuring lumbar support and 42" of pitch. The in-flight entertainment monitor is 12.1" (the carrier, perhaps unique for a LCC, already offers embedded IFE for a fee; business class will have IFE for free). 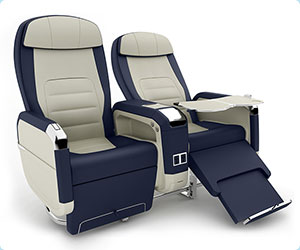 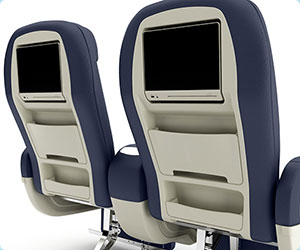 flydubai is further seeking a premium edge with additional service details. Cold snacks are offered on flights under 90 minutes while a three course warm meal is available for flights over 90 minutes.

Priority check-in and baggage collection are offered where available, as is lounge access. flydubai will open its lounge at Dubai Terminal Two later in 2013. In addition, checked luggage (charged in economy) is complimentary to business class passengers (exact weight/piece details forthcoming).

The definition of an LCC is increasingly being blurred. With flydubai's business class, the carrier is more full-service than short haul "full-service" peers in the US or Europe as far as the premium cabin is concerned with hot meals and dedicated seats, not an empty middle seat.

While flydubai is sticking to its LCC title, it is perhaps simply appealing to the entire spectrum of passenger: low-cost point-to-point, premium, connecting economy passengers and connecting premium passengers. If flydubai was full-service and entirely Emirates' short-haul unit, some destinations and frequency may not have materialised as flydubai could not offer as low a fare as it currently does, but on the other hand Emirates' scale could have helped it in other markets.

But if Emirates had its own narrowbody operation, flydubai – if it were to exist – would have a very different market segment than the dozens of routes Emirates cooperates with flydubai on.

flydubai is the second-largest carrier at Dubai by some distance but also noticeably – and understandably – behind Emirates. 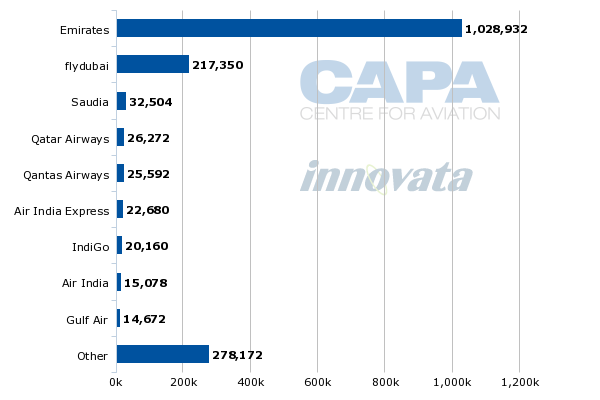 70% of capacity is within the Middle East. 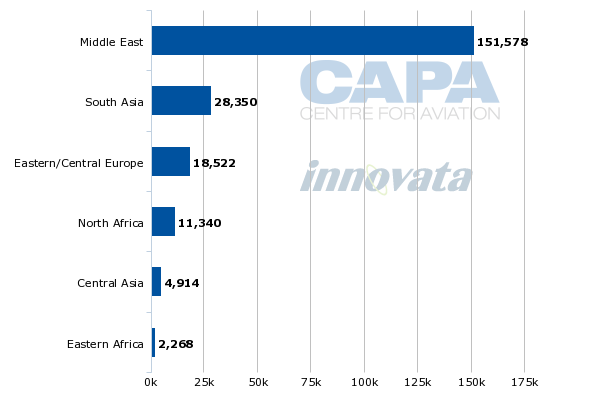 The Middle East accounts for about a third of unique destinations, indicating frequency is higher within the region than to others.

About a third of capacity is to Saudi Arabia alone, flydubai's single largest country by some distance. 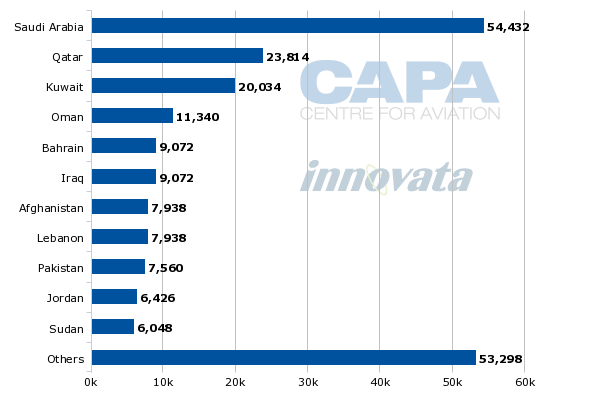 But its largest destinations are to Doha and Kuwait: 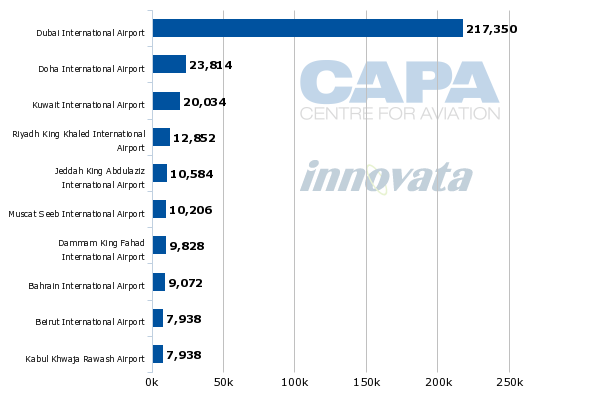 Flights go up to six hours – some LCCs try for four to five hours – but under three hours comprises a large portion of the carrier's routes. 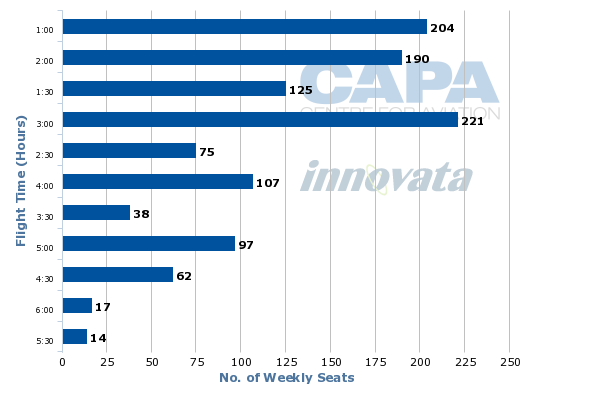 What flydubai has achieved will only gain scale as the carrier grows. As of Jul-2013 the carrier has 30 737-800s, with another 21 on order direct from Boeing.

Projected delivery dates, using best available estimates, point to 2014 being a strong growth year with growth tapering in 2015 and 2016. Even if deliveries are adjusted or leased aircraft are considered (two-thirds of its fleet is leased), flydubai looks shy on growth later in the decade.

A mooted order for 50 additional narrowbodies, from Airbus or Boeing, should address this. 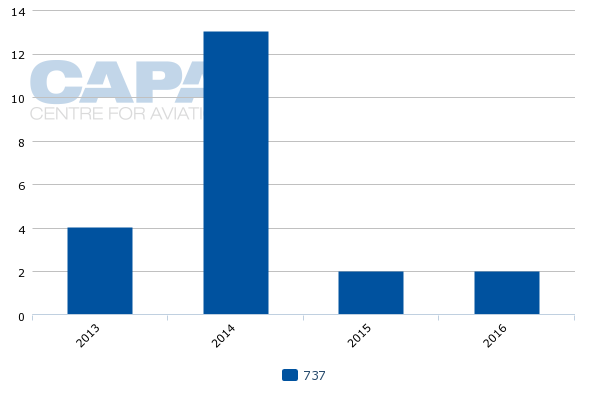 flydubai is the Middle East's largest LCC and solidly entrenched

Even without its scale, flydubai is evolving the concept of a hybridisation as it continues on its successful and widening niche.

After a relatively cautious start, the very hybrid LCC is now well entrenched and, as an increasingly important complement to its much larger and older long haul brother, so its future will benefit greatly from Emirates' expansion.