flydubai broadly maintained its profit in 2014 with a net margin at 5.7%. This is despite high costs from a rapid increase in the number of destinations, with flydubai on average adding a new destination every 16 days during 2014, its largest growth yet. flydubai opened as many destinations in 2014 as Emirates, Etihad and Qatar Airways combined. flydubai served more destinations than Etihad. While its Gulf home market remained strong, other markets, including Russia, showed weakness.

flydubai's 2014 net profit grew 12% to AED250 million (USD68 million), slower than its 19% increase in revenue but faster than its 10% capacity (ASK) growth. This was flydubai's third consecutive annual profit since its 2009 launch. The yield-driven airline improved its load factor to 65% – a record, but still with much opportunity for growth. 2014 had distortions due to the Dubai runway works forcing reduced capacity. Normalising this, ASK growth was 16% and 2015 so far shows 17% growth as flydubai takes seven more 737s – including its 50th. 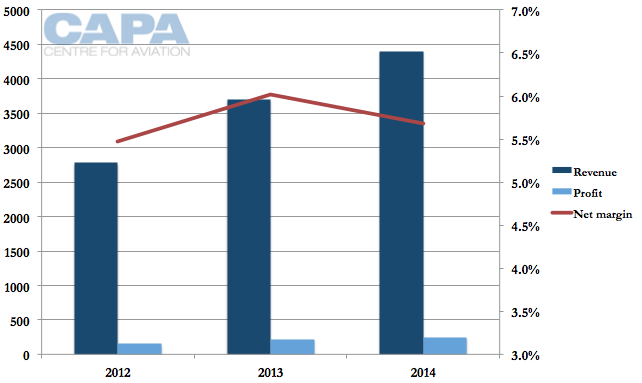 Costs, yields and other metrics are not disclosed so only a limited analysis is possible. Costs would have been impacted by two factors. First was the three month long Dubai runway works from May-2014 to Jul-2014 that saw flydubai reduce flights below 2013 levels. There was some alleviation by temporarily leasing new aircraft (including to Ryanair) until flydubai could restore its schedule.

flydubai increased ASKs by about 10% in 2014. However, this includes a decrease between May-2014 and Jul-2014 because of the runway works. Excluding this period, flydubai increased ASKs by 16%. This is lower than 2013's 29% ASK growth, but is to be expected as growth comes from a higher base each year. While growth rates may be varying, a net addition of seven aircraft has been consistent in recent years. 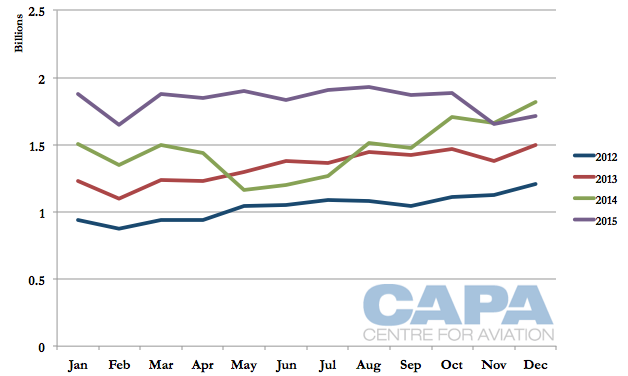 Preliminary figures from OAG show 25% ASK growth in 2015. However, excluding the distorted May to July period, growth is 17%. This includes capacity in Nov-2015 and Dec-2015 that is below 2014 levels. It is possible schedules have not been finalised for this period and actual capacity will be higher. New routes and increased frequencies still to be determined will further increase capacity.

Passenger numbers grow at slower 6% due to sector length increases 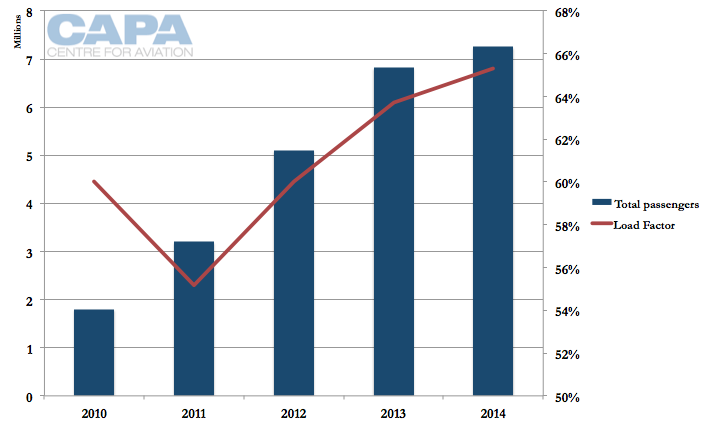 But flydubai is considering the possibility of a long-term plan to grow its fleet to 200 aircraft, a sum that could see flydubai have more aircraft than Etihad Airways. Although this represents more than a quadrupling from flydubai’s current size, it is not a vision difficult to see.

Realising that vision however will require work. Flydubai would likely need to grow connections, which accounted for 25% of traffic in 2013, almost the opposite of Emirates’ approximately 80% connections and 20% local traffic. Flydubai can continue to promote internal connections but will need to grow interlines and consider establishing codeshares. Flydubai will need to continue to lobby the government to remain in the near future at Dubai International, the city's main airport, and not move to Dubai World Central.

Flydubai had an atypical birth with an order for 50 737-800s at the 2008 Farnborough Airshow. It is unusual for LCCs to order aircraft, let alone 50, before they even launch (flydubai flew at the end of 2009), but the order reflects the seriousness and commitment of flydubai’s government shareholder to the long-term vision.

These 50 aircraft are for delivery through 2015, and will be supplemented with a further 11 737-800s that were ordered at the Nov-2013 Dubai Airshow. These aircraft are for bridge requirements until flydubai receives its first 737 MAX 8 in 2H2017. As part of the same order at the Dubai Airshow, flydubai ordered 75 737 MAX 8s with options on a further 25. The 75 firm orders are due for delivery until 2023 and are planned to replace the 737-800s on a one-for-one basis, meaning the firm orders also include growth.

Flydubai has the right to convert orders to a larger variant. Flydubai has studied Boeing’s larger 737 MAX 200 but does not believe the option is viable yet for the carrier. Bulk cargo is important to flydubai since it operates to under-served points. Even on major routes, cargo space is important for large excess baggage often carried by traders.

On the larger MAX 8 variant, flydubai does not believe it would have enough belly space. Flydubai already runs short on space on its existing configuration. Flydubai aims to serve markets that do not regularly need payload restrictions.

flydubai's network increases in 2014 to markets like Saudi Arabia and India reflect regulatory improvements. But there is still a way to go, especially in India, where flydubai said in a statement "there remains much opportunity".

Looking at flydubai's top markets (ranked on ASKs) for 2014 and 2015, there is much change. Saudi Arabia remains the largest. Russia has declined 13% (but dropped only from #2 to #3) while India has gone from seventh largest to fourth, reflecting regulatory permissions. Lebanon has moved up two rankings while Egypt cracks the top 10 list, reflecting growing stability.

Source: CAPA - Centre for Aviation and OAG
Note: Figures are not adjusted for the runway closure in 2014

Africa is still a small component of the flydubai story, with 9% of seats and 14% of ASKs to the continent, according to OAG data. There is potential for more growth but this will likely be secondary to growth in prime markets like India. Viewed another way, flydubai has grown in markets like Africa since it could not receive the growth it hoped for in India. 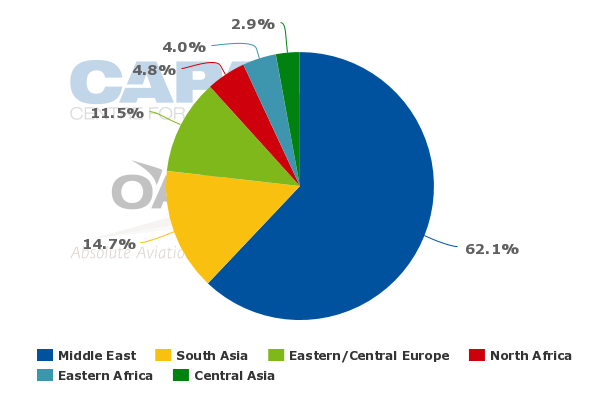 Outlook: challenges ahead but mostly subdued. The big question is strategy

flydubai's outlook remains bright. Its 2014 result was particularly impressive given the impact from the Dubai runway works and the number of new stations, a costly endeavour. In Oct-2014 flydubai completed its rollout of business class (except to its first seven 737s, as planned) and at the end of 2014 70% of routes offered business class. flydubai has a niche cargo business, transporting 3000 tonnes a month on average in 2014 despite 737s only accepting bulk cargo and not containerised loads. Point to-point traffic is high, especially compared to the mostly-connecting traffic at Emirates, and there is little risk of Dubai seeing demand drop.

Load factors are low but yields are high. Given flydubai's geography and segment position, there is limited potential for routes to become competitive. But if they do, flydubai can discount fares and pursue a volume strategy where necessary. There are few significant airlines profitable with load factors in the mid-60%s. This also presents opportunity for improvement, as does flydubai's 14.4% share of revenue from ancillary sales. Ancillaries are a difficult area to navigate in the region, with many enjoying luxury service, although wealthy locals are far from the sole passenger demographic.

There appears to be financial support, with a USD500 million Sukuk oversubscribed by six times. flydubai says funds will be used for "general corporate purposes and refinancing".

Short of a health epidemic in the Middle East, regional instability will have limited impacts. Even Russia, which has seen large changes in outbound travel due to currency depreciation, accounts for only about 6% of flydubai's ASKs. Then again, a number of regional issues can combine, but by now flydubai and peers are learning to respond to issues from Egyptian political instability, aircraft re-routing over Syria and gun shots at Baghdad airport.

For an industry with many external factors, the way forward looks surprisingly smooth for flydubai. The big question remains the internal matters: how close should they get to Emirates (or perhaps how close will Emirates allow flydubai to come) and a possible airport move. Emirates and others could use the space at Dubai International, where flydubai is the second largest carrier based on movements (Emirates being first).

It appears flydubai has the potential to open more routes and strengthen the Dubai hub via number of destinations and also higher point-to-point passenger numbers. Then again, Emirates' larger aircraft and higher load factors are arguably a better use for Dubai International's limited slots.

A move to Al Maktoum (Dubai World) would sacrifice some of flydubai's existing transfer traffic with Emirates and others, including United, which feeds flydubai about 360 passengers a week – a not insignificant figure given United's limited presence at Dubai. Moving flydubai west could see it compete with Etihad's Abu Dhabi catchment area but this would be at the expense of the larger catchment area around flydubai's current hub. flydubai moving west would be a benefit to Air Arabia, in nearby Sharjah.

flydubai's achievements and growth should perhaps be interwoven with Emirates. Narrowbody operations are an integral part of Etihad Airways and Qatar Airways but Emirates is widebody only, with only a handful of aircraft smaller than 777-300ERs. flydubai owes much of its success to Emirates not being present in certain markets. With 3.5 billion people in 737 range of Dubai, and the Middle East seeing the lowest LCC penetration rate besides Africa, there is clearly much opportunity for flydubai. The question is how it shares this market with Emirates – especially where there are limited traffic rights – and what the future relationship between the two should be and how clearly it should be defined.

It is easy to suggest that Emirates, the world's largest international carrier, should call the shots. But with Emirates in Oct-2015 turning 30 years old, agility has started to escape it. Emirates may be far ahead of nearly century-old carriers, but legacy is creeping. As observed with LCC/full-service relationships from Delta/Song to Qantas/Jetstar, the younger sibling may have a few things to teach. But older siblings can be very resistant.